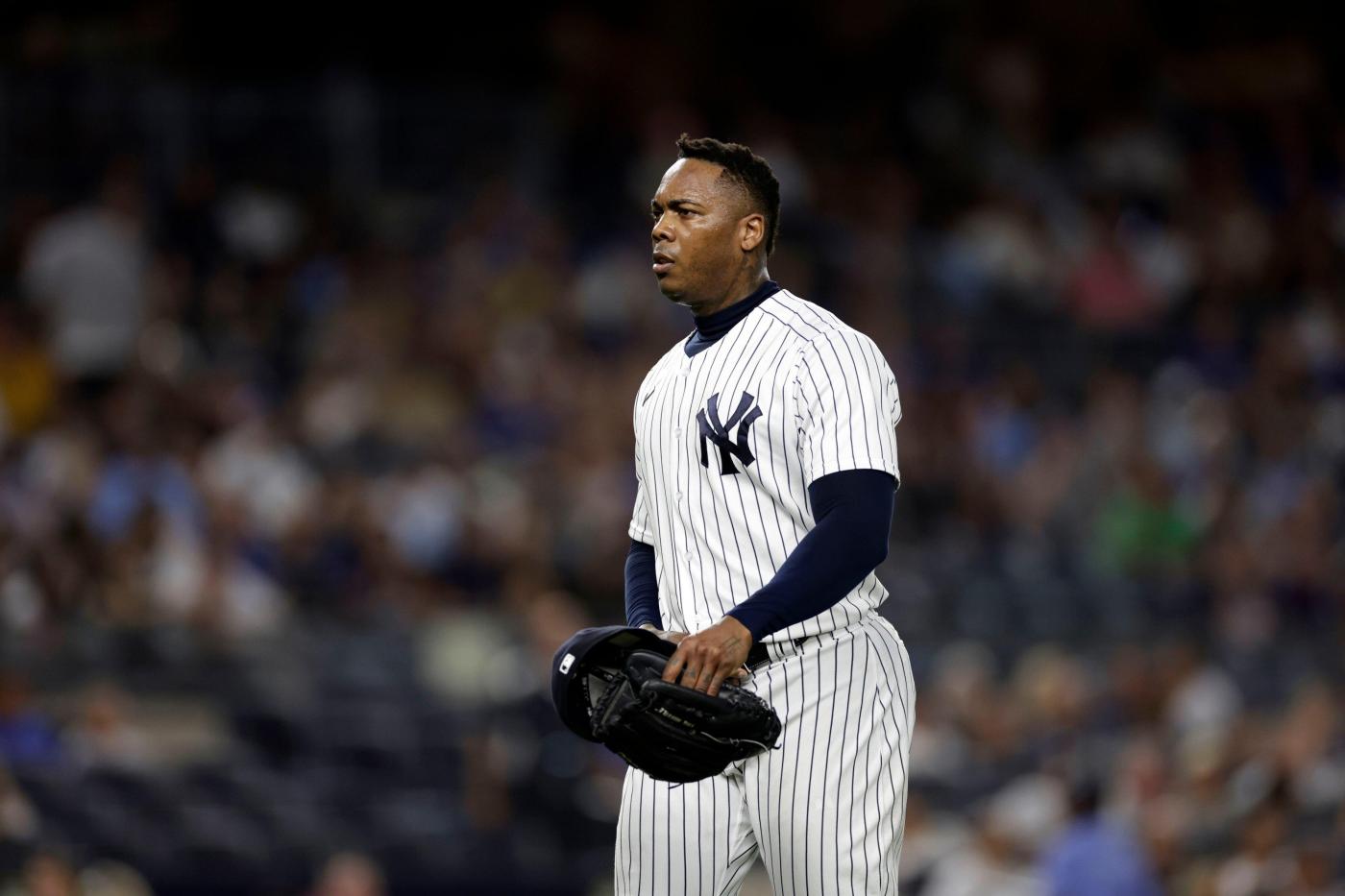 OAKLAND — Aroldis Chapman has an infection in his leg after getting a new tattoo and is heading to the injured list. Chapman had not appeared in a game since Aug. 19 against the Blue Jays.

“It hasn’t been non-pitch the last couple of days, he’s got an infection in his leg right now. So we were hoping … to take care of it the last couple of days,” Yankees manager Aaron Boone said before Saturday night’s game against the A’s at the Coliseum. “It’s still significant enough from a tattoo that he recently got, he got a pretty bad infection in there. So, he was actually at the hotel yesterday. He’s still back at the hotel now. So we’re treating him with medicine, antibiotics and things like that.”

Chapman has struggled since the middle of last season. The 34-year-old has the highest ERA (4.70) and walk rate (16.2) and the lowest strikeout rate (25.7) of his career. He lost the closer role after getting nine saves this season and the Bombers are still trying to get him back on track.

Boone said Chapman got the new tattoo either Tuesday or Wednesday and it started to bother him after they arrived here in Oakland. The Yankees expect Clay Holmes to come off the injured list on Monday, so they were not making a roster move on Saturday. There was a possibility a move comes on Sunday depending on how much pitching they used Saturday.

It’s an unusual injury and Boone said he didn’t think it was risky behavior during the season.

“I don’t have tattoos. I don’t know. So, I mean, that’s a personal choice … usually a pretty safe thing to deal with,” Boone said. “This is more of an unfortunate situation that it has turned into an infection. My focus is on trying to get him right and healthy.”

Chapman was seen by the A’s doctor and did not require a hospital visit. Boone is hopeful he will be back this season.

“Hopefully he’s good in several days. We can backdate this a few days. But we got to get our arms around it and get the infection out of there, because it’s gotten a little bit worse over the last two days,” Boone said.

After taking a pitch off his right big toe Friday night, Jose Trevino was not in the starting lineup on Saturday. The catcher would only say “I’m good” multiple times when asked about the injury.

“Yeah, probably just in an emergency situation,” Boone said of Trevino’s availability for Saturday. “Hopefully, something that’s just a day-to-day thing and feel fortunate that we hopefully dodged something serious.”

Catching coach Tanner Swanson said that there was real concern Friday night, because where Trevino was hit would affect his crouch behind the plate. The right big toe  would have to be flexed for him to be behind the plate.

“But the news is good today and we’ll see,” Swanson said. “The [catchers] are banged up this time of year and they are doing a great job managing it.

Trevino left Friday night’s game and had X-Rays at the ballpark and they showed no damage to the bone, but he was “pretty beat up,” according to Boone.

Trevino has had a breakout season. The catcher, who hit .245/.270/.364 with a .634 OPS and nine home runs in part of four seasons with the Rangers, turned himself into an All-Star this season. After being acquired by the Yankees at the end of the spring training, he quickly established himself as one of the best catchers in the big leagues. He is hitting .271/.309/.429 with a .737 OPS and 10 home runs in his first season in pinstripes. He is considered the best catcher in the majors in framing pitches, according to Baseball Savant, and by pitchers in the league he is seen as a wizard at stealing strikes in the bottom of the zone.