These are alarming days for investors, with most now in need of an antidote to the chaos caused by the mini-Budget’s most publicised announcements. Focusing on its other measures may be a way to lower the angst, and reconfigure your portfolio.

As part of his plan to boost growth – about which we should hear more at next week’s Conservative party conference – Chancellor Kwasi Kwarteng is pledging to streamline planning for roads and other categories of infrastructure, such as energy projects of various types, including hydrogen, nuclear, onshore wind, energy efficiency and energy security.

Building and upgrading such systems should support recovery in the UK and globally. Labour also regards more infrastructure investment as fundamental to economic success: the Organisation for Economic Cooperation and Development estimates £5trillion is required every year worldwide until 2030. 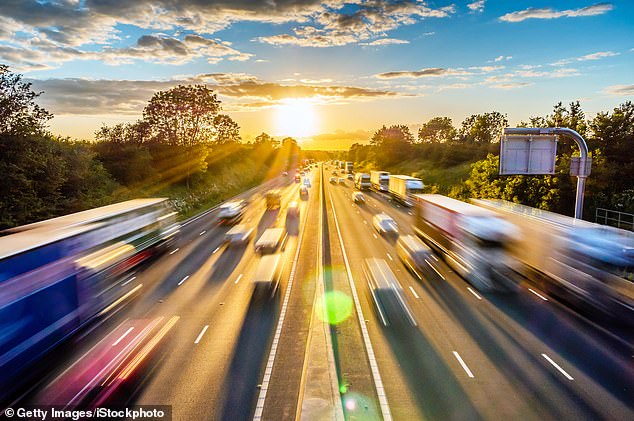 Driving force: If you decide to commit cash to infrastructure – about 5 per cent of your portfolio is the suggested portion

There is a new urgency as war rages in Ukraine. ‘what the world needs now is energy efficiency,’ says will Riley of the Guinness Global Energy fund.

This week’s sabotage of gas pipelines between Europe and Russia will heighten calls for more energy security.

Stephen Daniels of the ARC Time UK Infrastructure Income fund, which holds stakes in the major infrastructure trusts, comments: ‘Energy efficiency is at the top of the to-do list of a great many countries.’

If you decide to commit cash to infrastructure – about 5 per cent of your portfolio is the suggested portion – there is an extra: the inspiring nature of the technologies.

For example, a former tip may not be a suitable plot for new housing. But the methane produced from the mouldering garbage is a greenhouse gas and can be used to produce electricity.

Daniels points out that private investors used to be excluded from the opportunity to back such technologies, and also projects that require huge capital such as roads and railways.

Infrastructure has traditionally been seen as a sector that is uncorrelated to stock markets, a key consideration for investors reassessing their options.

There is also the opportunity for an assured income. The contracts under which many public sector projects operate provide long-term inflation-linked revenues, although the mini-Budget has had a damaging impact on these.

Infrastructure investment trusts use a discount rate formula to assess the value of future cash flows. But the fall in the price of gilts, which has made higher interest rates more likely, threatens to raise discount rates.

A higher discount rate makes any revenue stream appear less attractive. The typical discount rate is 6-7 per cent and a 1 per cent increase would typically decrease the net asset value by about 6 per cent.

These concerns have hit trusts’ share prices. Shares in the HICL Infrastructure trust, which has stakes in the A63 autoroute in France and Affinity water in the UK, are down by 14 per cent over the past week.

The discount rates are set to be under scrutiny, as will the drafting of the planning policies and how they are enacted, as James Dawes, chief financial officer of the 3i Infrastructure trust, explains. 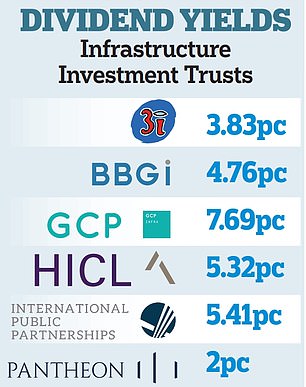 He says: ‘The mini-Budget move to cancel corporation tax rises will benefit companies. But the devil is in the detail of the structure of the planning reforms.’

Kwarteng may have pledged that scores of UK schemes would be ‘fast-tracked’, but such promises have not always been kept.

There are also the problems posed by surging costs for construction and materials – and the likelihood that interest rates will be raised more rapidly than earlier thought.

Dawes comments: ‘Most of our companies have long-term fixed-rate financing. But the spike in borrowing costs does pose a risk for the funding of new projects.’

The trust, which has delivered a 76 per cent return over the past three years – twice the average for the sector – focuses, for the moment, on the UK and Europe.

It owns Infinis, a UK group that produces power from landfill sites, and ESVAGT, the Danish group whose vessels support the offshore wind, and oil and gas industries. Thanks to its track record, the share price of 3i Infrastructure stood at a 20 per cent-plus premium to the value of its net assets earlier this year.

This has now reduced to a 3 per cent discount in line with the trend across the sector, in the wake of the mini-Budget, turning the trusts into a feasible proposition for investors like me who do not like to overpay.

For example, the premium on the BBGI Global Infrastructure trust has fallen to 3pc despite its inflation-protected income from its healthcare and transport public-private partnerships. when you cross the Golden Ears bridge in Vancouver, Canada, you are on a BBGI Infrastructure asset.

Navigating the weeks ahead is going to be challenging, with focusing on the long-term even more difficult than usual.

One thing is close to certain: the world population is rising and will need more infrastructure in every form – roads, rail lines, healthcare facilities and electricity.