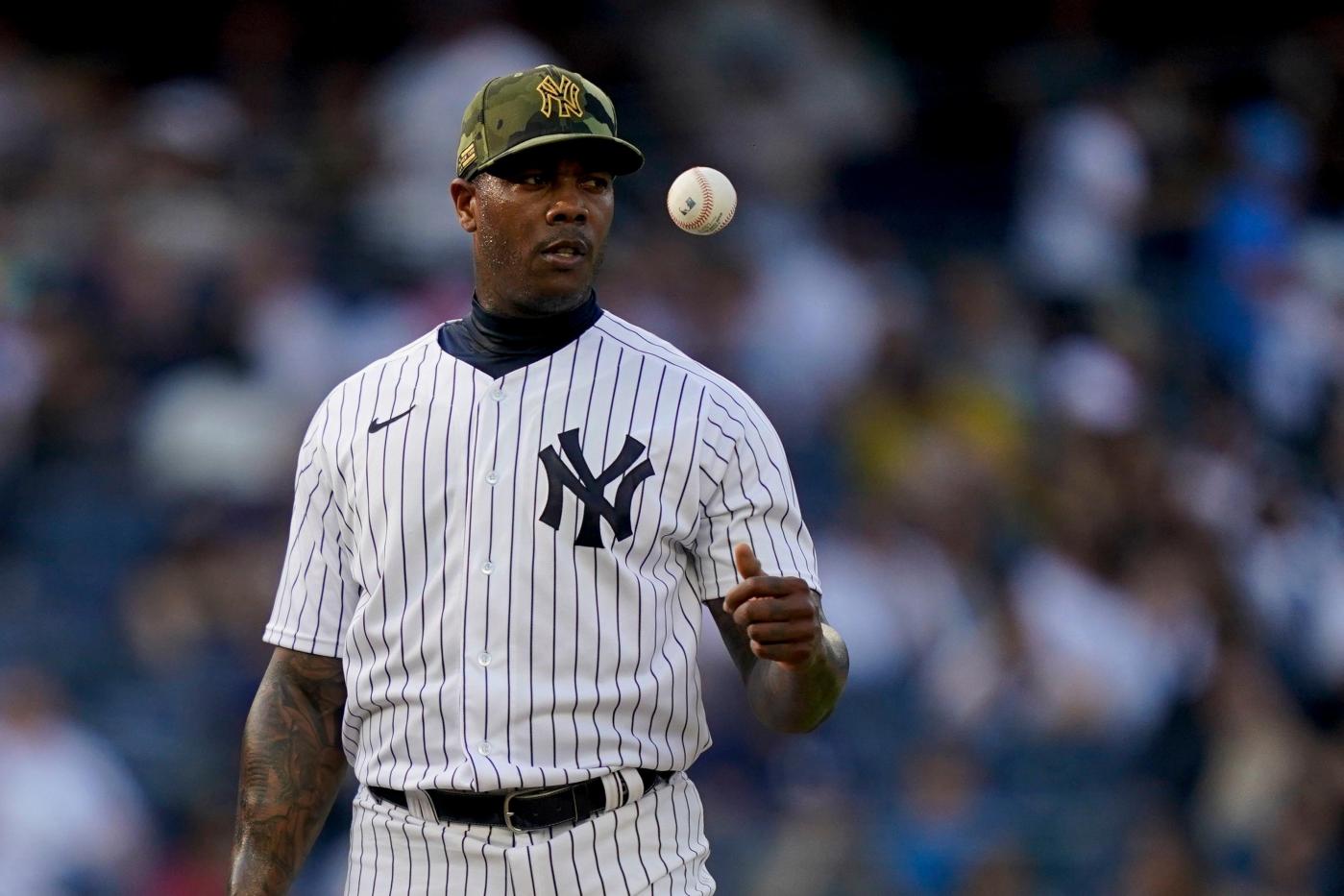 Aroldis Chapman was throwing on the field before Tuesday’s series-opener against the Ray at Yankee Stadium. It was the second time the closer has thrown off the mound and he will need one more session before he is ready to face hitters, Yankees pitching coach Matt Blake said.

“So the biggest thing is just to get him to focus on straight lining his delivery to play and not getting too rotational, too big,” Blake said. “And I felt like he’s made a lot of progress in the last week or two as he’s gotten used to focusing on these things in his throwing program.”

Chapman has been on the injured list with an Achilles issue, but it has held him back for about a week and a half. He’s used his time on the IL to work on his delivery. In the last five games he pitched before going on the IL, Chapman was scored on in each. He allowed six earned runs over 3.2 innings pitched.

Chapman threw 25 pitches Tuesday, all of them hitting 96- to 98-miles an hour, Blake said. He had some balls go wild, which has been a problem in the past.

“I feel like that was probably about B, B-minus command, all things considered, but better than maybe what we’ve been getting,” Blake said. “So it’s just a process for him. Probably got one more bullpen and we’ll see where he’s at.”

In his absence, Clay Holmes has taken over the role of closer and done very well. Holmes has not allowed a run to score in his last 28 straight innings, over 26 appearances.

With Josh Donaldson serving his one-game suspension for his “disrespectful comments,” to White Sox shortstop Tim Anderson Tuesday night, it was a chance for Yankees manager Aaron Boone to get Matt Carpenter back in the lineup.

“I mean, he’s been terrific. And today made a lot of sense coming out of the off day,” Boone said. “Get another lefty bat in there with (Giancarlo Stanton) being in the outfield lined up pretty well.”

The 36-year old infielder has eight hits as a Yankee in limited playing time and six of them are home runs. He’s coming off a game Sunday when he was an emergency starter and went out and hit two home runs and a double to drive in seven runs.

“Power and patience,” Boone said of Carpenter. “When he got to us, he was at home and had been at home for several days and right away we saw good at bats. And then this past week, he really hadn’t played much at all. And he goes in there the other day and it’s right away the same kind of quality of the bat. So it’s been impressive.”

Catcher Jose Trevino, who was a late scratch on Sunday because of a back issue, was back in the lineup Tuesday night.

“I’m not too worried about it. I felt like he probably could have played Sunday but with the off day felt like it was the right thing, especially coming off that night game,” Boone said of Trevino’s back issue. “So yeah, we’ll continue to monitor it. And hopefully, it’s, it’s something that’s not a big deal.” It’s the seventh straight time — and ninth overall — that Trevino has caught Gerrit Cole, who used to have Kyle Higashioka as his personal catcher. Cole has a 3.28 ERA with Trevino behind the plate and a 4.25 in the four games Higashioka caught.

Trevino’s bat has been the deciding factor in him getting more playing time. Trevino is hitting .440/.472/.800 with a double, a triple, five home runs and 15 RBI over his last 18 games.

LOAISIGA BACK ON TRACK

Jonathan Loaisiga, who is on the IL with shoulder inflammation, began his throwing program on Monday. The right hander had it delayed by a week because of a trip back to his native Nicaragua to deal with a personal matter.

“He threw yesterday and threw today,” Boone said. “So he’s doing well now that he’s starting his in his throwing progression.”