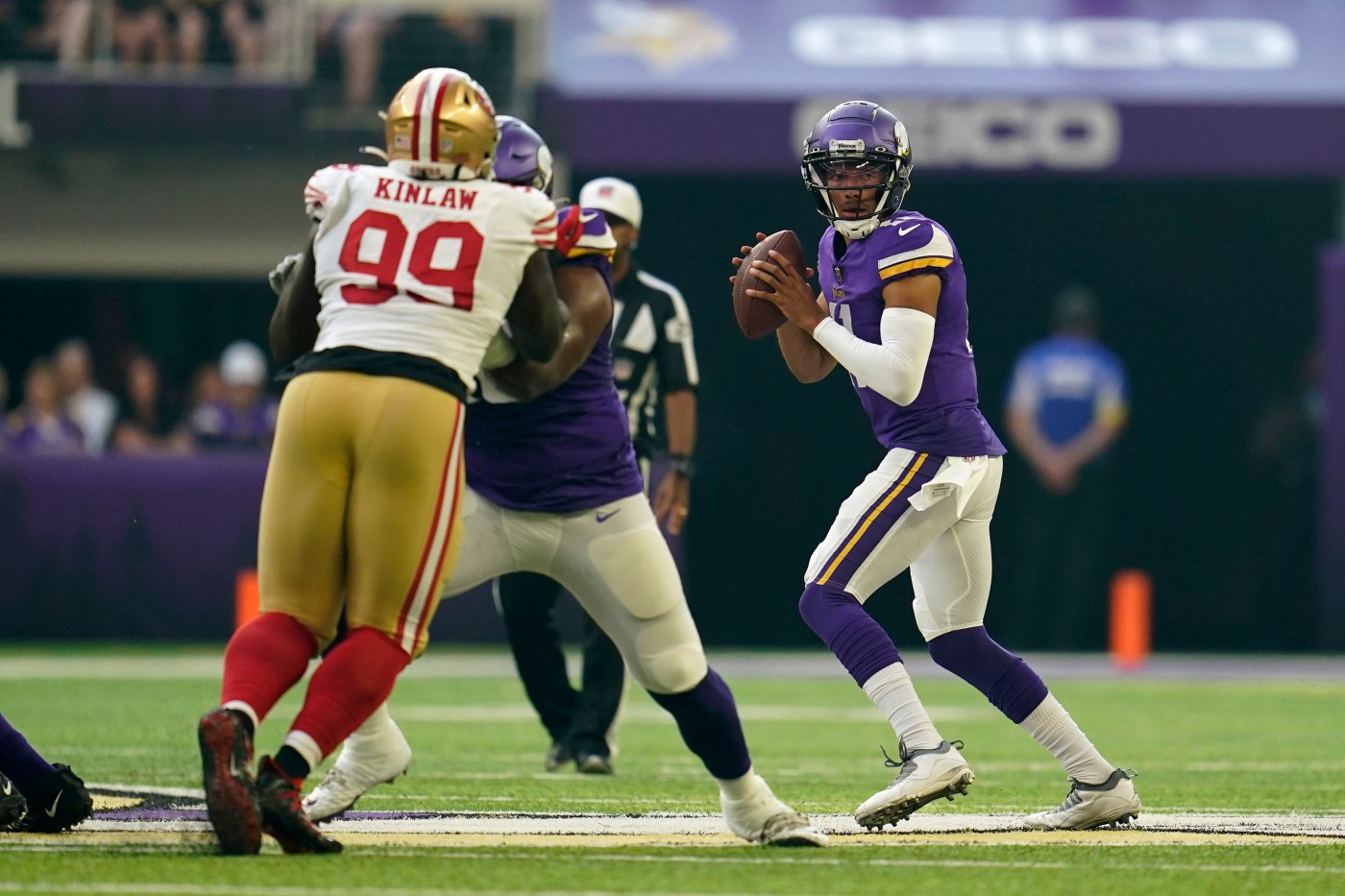 MINNEAPOLIS — Javon Kinlaw justifiably drew double-teams as the 49ers’ only defensive starter to suit up for Saturday’s preseason game.

He made the Minnesota Vikings pay when they left him one-on-one.

Kinlaw ripped inside past right guard Ed Ingram and sacked quarterback Kellen Monds inside the Vikings’ 5-yard line, touching off Kinlaw’s celebratory shuffle through the end zone and to the 49ers’ bench, where teammates greeted him with smiles and high-fives.

That was the best-case scenario this exhibition game could offer the 49ers. Aside from guards Aaron Banks and Spencer Burford, the 49ers stashed all other starters, mostly because of their workload in joint practices with the Vikings but also because the preseason finale is Thursday at Houston.

Getting Kinlaw more reps on his reconstructed knee was important. Their 2020 top draft pick made a 14-snap cameo in their preseason-opening win over the Green Bay Packers. He did not take part in the offseason practices and was eased into action throughout training camp.

Playing almost the entire first half was great for his conditioning — and his reputation.

“He brings an intimidation factor, for sure,” defensive end Nick Bosa said of Kinlaw after the 49ers’ practice Wednesday with the Vikings. “… He’s got everything you could possibly need to be super dominant in this league. He just needs some reps to get used to it. I’m just glad he’s feeling good.”

Kinlaw said in April his goal this season was to get to the quarterback more often, rather than just be a run stuffer with his 6-foot-5, 319-pound frame.

Another point of emphasis for him was to not rely on his bull rush. On a second-quarter play, Kinlaw showed great hands in immediately swiping his way past the left guard, but the Vikings had a quick-throw completion.

Bracketing Kinlaw on his sack — late in the first quarter — were defensive ends Drake Jackson and Kemoko Turay. When Kinlaw returned for a second-quarter series, he drew a double-team block as a third-down pass fell incomplete. Then Kinlaw took a seat on the bench, again, next to Nick Bosa, who’ll be the one drawing double teams in the regular season.

Kinlaw was taking off his gloves and signaling the end of his work shift after getting pulled late in the second quarter. In his absence, the Vikings’ Ty Chandler then scored a 3-yard rushing touchdown past defensive tackles Hassan Ridgeway and Akeem Spence.

The 49ers did not suit up all their other projected Week 1 starters, except for guards Aaron Banks and Spencer Burford. The 49ers’ offense proved lackluster without their top players — and without Kyle Shanahan truly gameplanning in the exhibition season.

Gifted an opening possession at the Vikings’ 48-yard line, Sudfeld and the 49ers could not secure a first down. Turned back on third-down run by JaMycal Hasty (not helped by blocks from right tackle Jordan Mills and tight end Ross Dwelley), the 49ers went for it on fourth-and-1, only for Ty Davis-Price to get tackled at the line of scrimmage.

With the score 0-0, rookie Brock Purdy entered for the 49ers’ third series and, like Sudfeld, could not engineer a first down on his opening snaps. Banks yielded pressure on a third-down incompletion on Purdy’s second series.

Rookie Sam Womack III is a takeaway machine. After making two interceptions in the preseason opener, he recovered a fumbled punt return in the second quarter. He also assisted on George Odum’s interception in this game’s opening series.

With the Vikings facing third-and-8 at the 49ers’ 29, Womack blitzed from the slot, and fellow rookie Drake Jackson rushed up the middle to pressure Kellen Mond into an off-target throw that Odum nabbed at the 18-yard line.

Justin Skule’s rough camp continued. On the second series, he committed a false-start penalty, and his pass protection continued to plague him. Skule, a fill-in starter for 12 games in 2019-20, was a strong candidate to serve as last season’s No. 3 tackle before sustaining a torn anterior cruciate ligament in spring workouts that caused him to miss last season.

The 49ers did not suit up their probable Week 1 starting tackles, Trent Williams and Mike McGlinchey, nor this camp’s top backup, Colton McKivitz. McGlinchey came away from the preseason opener with an irritated knee that sidelined him from practicing the past week.

Keaton Sutherland started at center while the 49ers kept out Jake Brendel and Daniel Brunskill (hamstring). Sutherland and Burford were beat on a third-down sack in the second quarter.

— An 8-yard scramble by a head-first sliding Purdy served as the 49ers’ longest run of the first half. With Elijah Mitchell (hamstring) and Jeff Wilson Jr. not suited up, the 49ers couldn’t generate much running room in the first half for Trey Sermon (five carries, 8 yards), Ty Davis-Price (two carries, 5 yards) and JaMycal Hasty (4-yard carry).

— The 49ers converted Womack’s fumble recovery into the game’s first points: a Robbie Gould field goal, from, ahem, 49 yards with 9 1/2 minutes to go until halftime. Gould added a 46-yard field goal for a 7-6 halftime deficit.

— Wide receiver Austin Mack was ruled out in the first half with a hamstring injury. The 49ers have had several players sustain that injury the past month: running back Elijah Mitchell, safety Jimmie Ward, cornerback Emmanuel Moseley and guard Daniel Brunskill.

— Sean Mannion, a Foothill High-Pleasanton product, was 4-of-4 for 39 yards on the Vikings’ first touchdown drive.