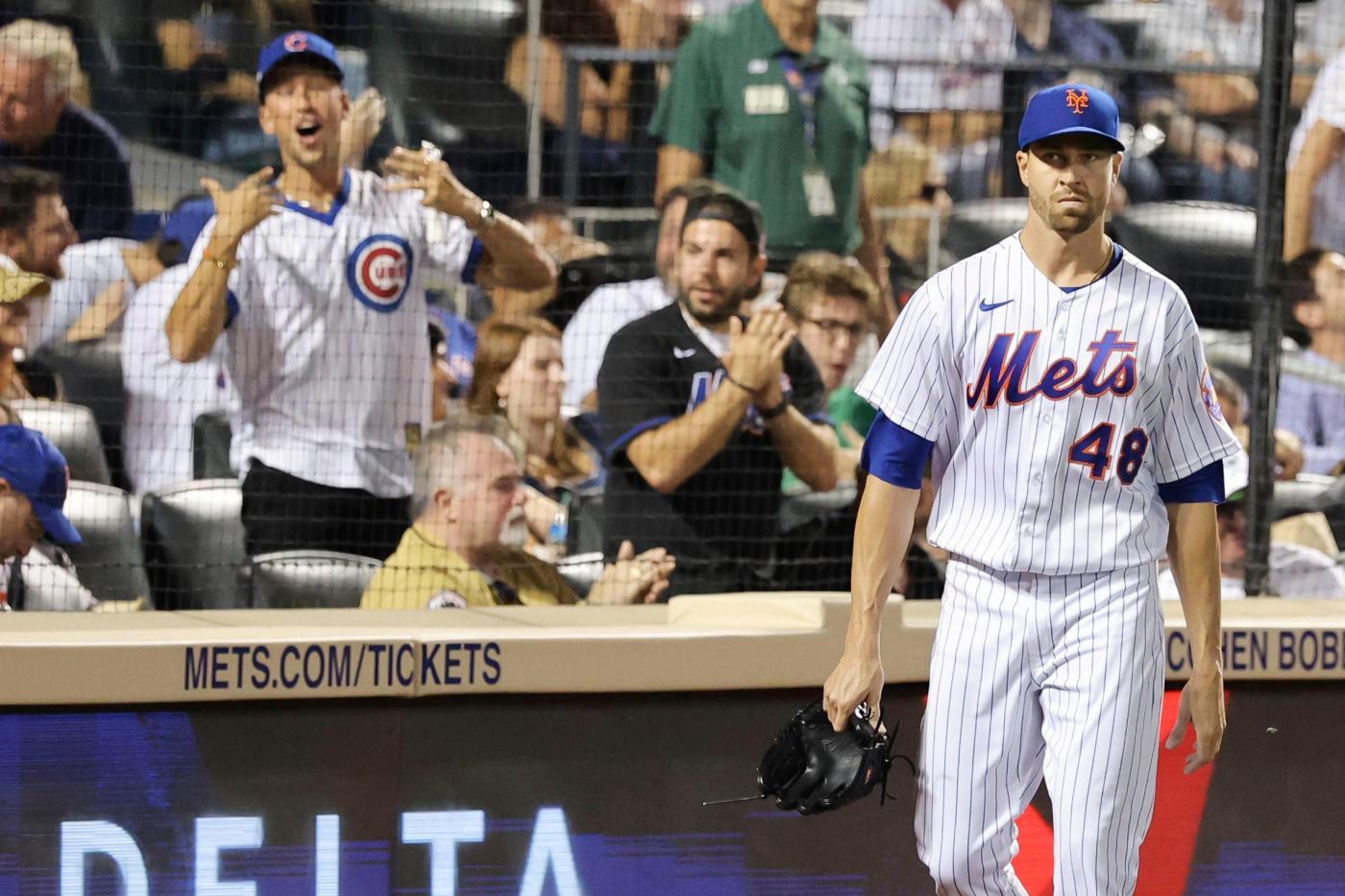 Putting together just one good inning is a pretty viable strategy for trying to beat Jacob deGrom.

When a team can combine that inning with a classic case of the Mets giving deGrom no run support, the strategy becomes bulletproof. It worked perfectly for the Chicago Cubs on Tuesday, leading to a 4-1 win over the Mets (89-54) that also earned Chicago (60-82) a surprising series win.

The Mets’ legendary pitcher notched 10 strikeouts in six innings, giving him his 56th career start with double-digit strikeouts. With four more, deGrom will pass David Cone for ninth place on the all-time list. The three runs deGrom allowed, crucially, were three more than his team scored for him. As such, the Mets fell victim to the familiar trope of failing to support the man who so consistently supports them.

Ian Happ started things with a solo homer in the second, but the Cubs won this game in the fourth. Back-to-back singles, a sacrifice bunt in which Michael Hermosillo reached when James McCann’s throw hit him in the head, then a sac fly and another sac bunt gave Chicago their next two tallies. An insurance homer from David Bote off Seth Lugo was mostly for bookkeeping purposes, as the Cubs’ pitching did more than enough to secure the victory.

Adrian Sampson will always be able to say that he beat Jacob deGrom. The 30-year-old journeyman pitcher was drafted in 2012, made his major league debut in 2016 and eventually spent the 2020 season in Korea after failing to find a foothold in MLB. But on Tuesday night at Citi Field, he outpitched one of the game’s best.

Sampson worked around four walks to shut the Mets out for six innings. While he only registered three strikeouts, the man who had a 5.40 ERA in the KBO League held the Mets to two puny hits, both of which were singles. Players not named Jeff McNeil went 0-for-16 against Sampson, who was making his 40th MLB start. This was his first time going six scoreless innings.

To put it in not-so-harsh terms, the Mets’ position players look like they need a collective nap. This team appears to have run out of gas, and the long-awaited “easy” stretch of their schedule has done nothing to fill up the tank. Save for one game against the Dodgers at the start of the month, the Mets’ slate of September games has been exclusively against the Nationals, Pirates, Marlins and Cubs. All of those teams have played spoiler to some degree, with each one taking at least one game off the Mets.

“We’ve had some talks this year,” Buck Showalter said when asked if he feels the need to address the team. “These guys have had some things between themselves, too. We’re always taking the pulse of it.”

Now, the Mets find themselves in the strange situation of playing a quasi must-win September game against the cruddy Cubs. Getting swept on Wednesday would be the low point of the team’s season. That’s not quite what a team already without injured stars Max Scherzer and Starling Marte was hoping for as they prepare to shift into postseason mode.

“Just because this is in September doesn’t mean it’s as frustrating now as it would have been in April,” Pete Alonso said after the game, trying to make the point that every loss stings equally. “Sometimes you just have to take it off the chin and go play your heart out tomorrow. That’s what we’re going to do.”

It’s one thing to lose to these Cubs right now. It’s another to score zero runs in eight innings against Sampson, Michael Rucker and Brandon Hughes. Those no-name Cubs now have a 4.59 collective ERA in their careers, which doesn’t exactly strike fear in the hearts of their adversaries, but does make for a slightly humorous anecdote. When Alonso finally got the home team on the board by banishing a ninth-inning pitch over the left-center field wall, it felt like a tacit acknowledgement that the Mets’ previous eight innings were unacceptable and something needed to be done.

After riding a six-month high through most of the 2022 season, Met fans are now coming down hard. A sparse crowd for a midweek game the night after a thunderstorm can be expected, even with deGrom pitching. But that crowd being fed a giant plate of disappointment was a little jarring, especially given the opponent. The 26,435 fans in attendance matched the energy of their heroes on the field, which is to say that Citi Field felt like a library for most of the evening.

One more winning streak will melt all of this away of course, and though we’ve been saying it all month, maybe this upcoming series will be the one where the Mets finally twist their boot on an inferior opponent’s neck.

“We’re a really good team, and I feel like we have all the pieces to overcome this adversity,” Alonso said from his locker. “We’ve earned every single bit of where we’re at. We haven’t been lucky. We’ve been really, really good all year long.”

These games with the Cubs certainly weren’t the turnaround series. But if the Pittsburgh Pirates have been monitoring the Mets in preparation for their four games in Flushing this weekend, they likely see what we’re all seeing: a club draped in blue, orange and the ability to be defeated.

“We’ve got some guys with track records doing it for us,” Showalter stated after the game. “I have confidence that they’ll fight their way through it.”