James Wiseman ‘90% sure’ he will play Summer League 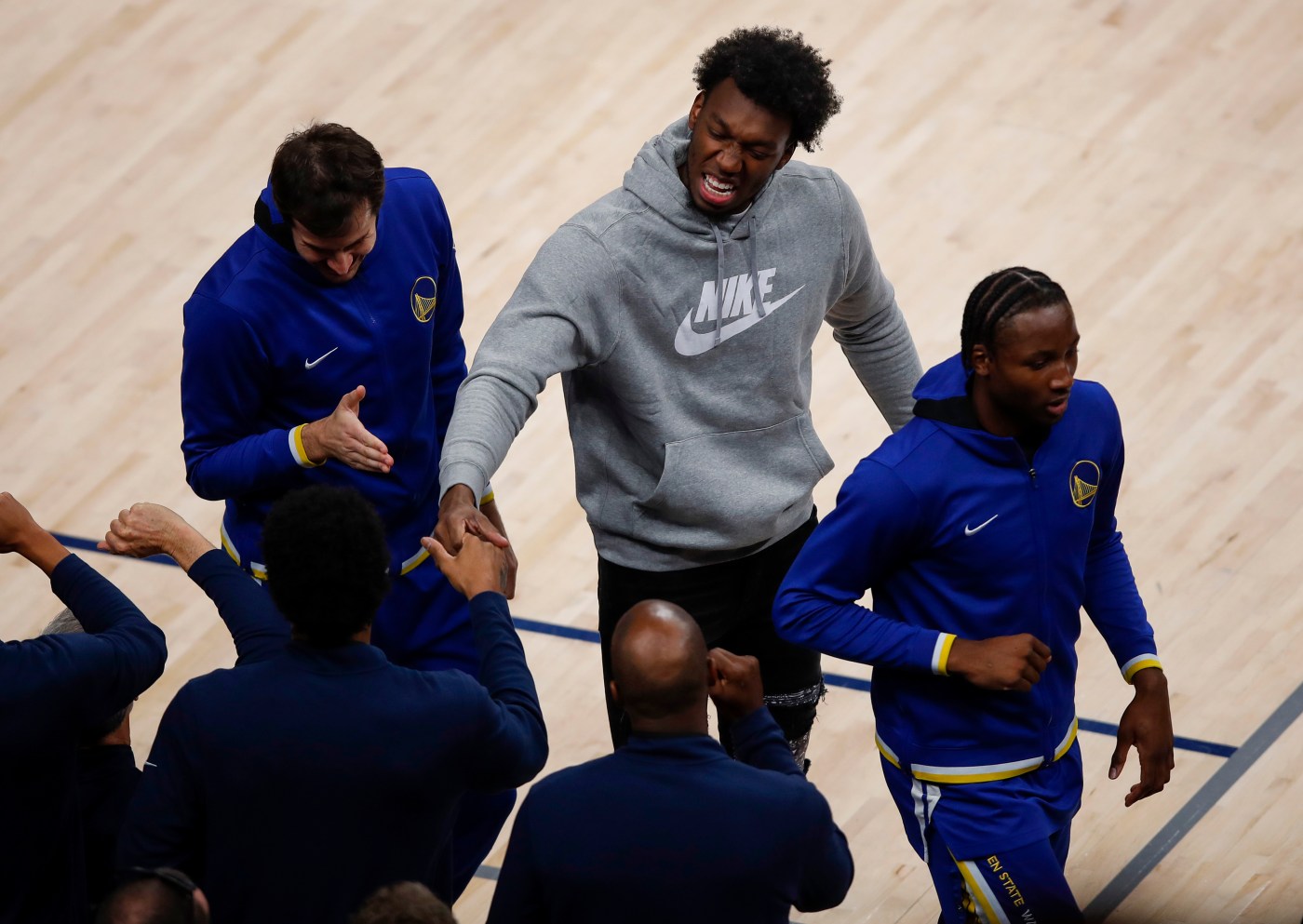 SAN FRANCISCO — Even from the bench, James Wiseman made sure to soak in every bit of the Warriors’ NBA title run. Now the No. 2 overall pick is hoping to get back on the court and help the Warriors defend that title in 2023.

How and when Wiseman will take those steps is still up in the air, though there is a good chance he will participate in Summer League games for the Warriors in Las Vegas mid-July.

“Most likely play in Summer League but we’re trying to get situated,” Wiseman said on Saturday afternoon as the Warriors returned to Chase Center for some hungover exit interviews. “It’s up in the air, but there’s a 90 percent chance.”

Wiseman was sidelined for the entire season rehabbing his surgically repaired knee. The seven-foot center had surgery to repair a torn meniscus last April with a timeline to return a year later for training camp earlier this year. But a series of setbacks prolonged his rehab and kept him out of game action.

In March, Wiseman approached the doorstep to a return to action, even playing in a handful of G-League games with the Warriors’ Santa Cruz affiliate. But a return was put on hold when his knee swelled up again.

Wiseman has had two procedures since his surgery last April. The first was arthroscopic surgery in mid-December to relieve swelling in his knee. And, according to reports, Wiseman had an orthobiologic injection in London this April.

Warriors coaches asserted Wiseman is in desperate need of reps — “thousands of reps,” as coach Steve Kerr put it in March. The 21-year-old has only played 39 NBA games in 2020-21 before tearing the meniscus on his left knee during a game against the Houston Rockets. He played just 69 minutes in three games at University of Memphis.

Watching the NBA title run from the sidelines was “challenging” for Wiseman. But he studied Memphis’ Jaren Jackson Jr.– who had meniscus surgery last year, too — during the Western Conference semifinals to see how he moved and worked.

Giving him some motivation, too, was watching rookies Jonathan Kuminga and Moses Moody contribute down the stretch and in the playoffs.

“It’s hard for me because I haven’t gotten the exact reps that Jonathan and Moses got,” Wiseman said. “I get the reps, and I think I’m going to be fine.”

Wiseman said he hasn’t had any knee swelling recently and is hoping to work on his rim protection and defending guards. For now, he’s celebrating being part of a winning team — he was right with his teammates during the champagne celebration in Boston, hugging the Larry O’Brien trophy. But he has his sights on short term goals.

“It’s all it takes, just to have patience,” Wiseman said. “I’m a young player with a lot of years left to play in this league, god willing. So I’m just being patient with myself and my craft. I don’t have no pressure…I will do whatever I can to make Steph (Curry), Klay (Thompson) and Draymond (Green) successful.”

Wiggins wants to stay with the Warriors

Once considered a first-pick bust, Andrew Wiggins reinvented himself as a standout in this playoff run. Still feeling the buzz from the NBA title celebration, Wiggins expressed his desire to stay with Golden State long term.

“I would love to stay here. Being here is top notch,” Wiggins said. “The way they treat their players, we’re all a big family. A lot of places might say that, but here they show that through their actions.”

Next season, Wiggins will be in the final year of his five-year, $147 million deal signed with the Minnesota Timberwolves at age 23. He’s up for a possible extension. Or a viable trade piece, depending on how the Warriors decide to spend next season.

Wiseman won’t be the only Warriors player worth watching at Summer League. Jonathan Kuminga hinted Saturday afternoon that he would “love to” play in the offseason competition in Las Vegas.

“I would want to do it especially if I’m trying to grow and learn and get better every day, I got to play more,” said Kuminga, who might also play for the Democratic Republic of the Congo national men’s basketball team this offseason. “I feel like the Summer League would be good.”

Some players go through their entire careers without winning an NBA championship. But at 19, Kuminga is the second youngest player to earn a championship ring.

Kuminga acknowledged how special it was for him to win at the highest level at such a young age. He enjoyed his cousin sending a video of his family doing the Griddy dance after the Warriors knocked off the Celtics in six games. His brother, who is back in Africa, also told him that “everybody is happy that you’re a champion.”

“I learned how to be a winner… and now I know what it takes to actually get to the Finals and get the job done,” Kuminga said. “By being out there watching what was going on, listening to coaches, listening to vets, that really helped me and I feel like if we just keep up with the good work hopefully next year we’ll get there and I’m going to  be one of the guys helping the team to get there.”