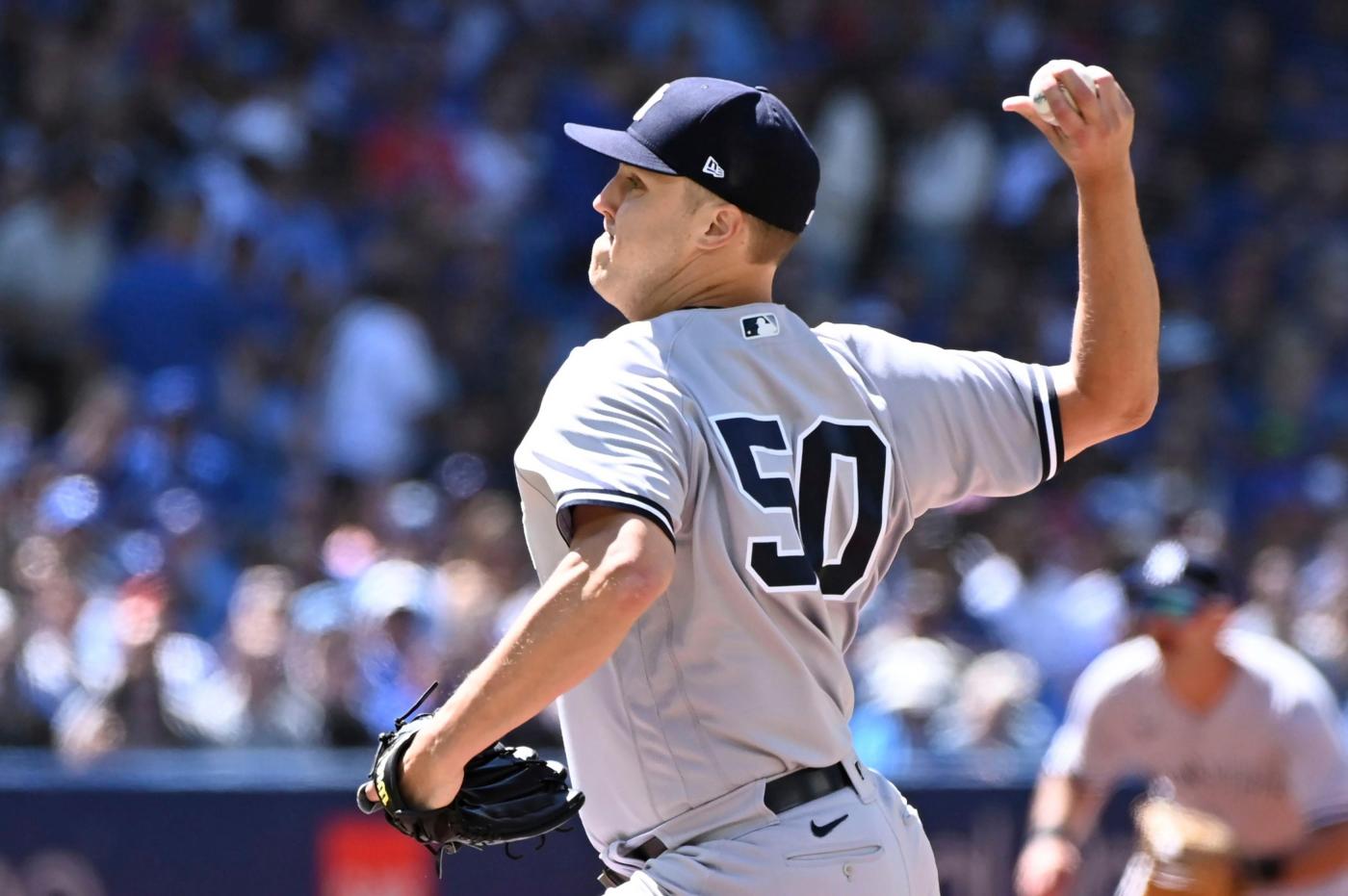 TORONTO — Jameson Taillon may have to change some plans around. The right-hander who came into the season as a question mark off of ankle surgery has already made plans for the All-Star break, but if he keeps pitching this way, he’s going to have to cancel them and reroute to Los Angeles to pitch in the Midsummer Classic.

Taillon dominated a dangerous Blue Jays lineup Saturday and combined with Michael King and Clay Holmes to shut them down in the Yankees’ 4-0 win at the Rogers Centre Saturday.

The Yankees (49-16) have won nine straight games and clinched this three-game series, their 17th series win of the season. The Bombers are 8-3 against the Blue Jays (37-28) this season and now have a 12-game lead on them in the American League East. They easily have the best record in baseball and with 49 wins have the second best start in franchise history through 65 games.

Aaron Hicks came up with the day’s big hit, Isiah Kiner-Falefa and Gleyber Torres each had two hits and Taillon picked up his third straight win over the Blue Jays this season and he combined with King and Holmes to pitch their 11th shutout of the season.

Taillon outpitched Alek Manoah, who’d been a Yankees slayer in the past, and has continued a great first half of the season. He’s one of several Yankees who should be getting recognized at the All-Star Game at Dodger Stadium.

“I mean, that’d be cool. I’ve already booked some All-Star [break] plans so I don’t know if I’m really expecting it or not,” Taillon said. “But it would definitely be a cool honor.”

He certainly continues to put himself in the conversation.

“I think he’s executing. [Taillon] usually can be tough for lineups that are left [and] right, because he’s pretty tough against left-handed hitters typically. But I think just having another gear this year, and being able to incorporate sinkers with the slider has helped him against righties, but still has a lot to feature to lefties too,” Yankees manager Aaron Boone said. “So I think he’s just happened to really be on top of his game, which he needs to be against a team like that and an offense like that.”

Taillon walked two on Saturday, the first time this season he has walked more than one batter in a game. He has walked nine in 73.1 innings pitched over 13 starts. He’s struck out 60 and has a 2.70 ERA over that span.

So, Boone thinks that Taillon obviously should be in the All-Star conversation.

“I shouldn’t have to beat the table for that. I mean, you look up the scoreboard or pick up a stat sheet or look at any number you want. He’s been great,” Boone said.

He was better than Manoah Saturday.

The Yankees had managed just four runs off Manoah in the 23.2 previous innings he faced them. They got four in just 5.1 innings on Sunday. He got through the lineup easily the first time, but the second time around the Bombers got to him.

Anthony Rizzo drew a leadoff walk and Torres singled. After Joey Gallo struck out, Kiner-Falefa beat out a ground ball to shortstop Bo Bichette to load the bases for Hicks.

But Saturday, Hicks worked Manoah for four pitches before getting the fastball he liked and lined it into right field to clear the bases. It was just the second double of the season for Hicks and just his fourth extra-base hit and 14th RBI of the year. It was the first time in 11 games that Hicks drove in a run.

“To be able to produce, especially when I’ve had a lot of hard times with men in scoring position, where I’ve hit it hard but right at somebody or just didn’t get the job done so you know, it feels good to get the hit,” Hicks said.