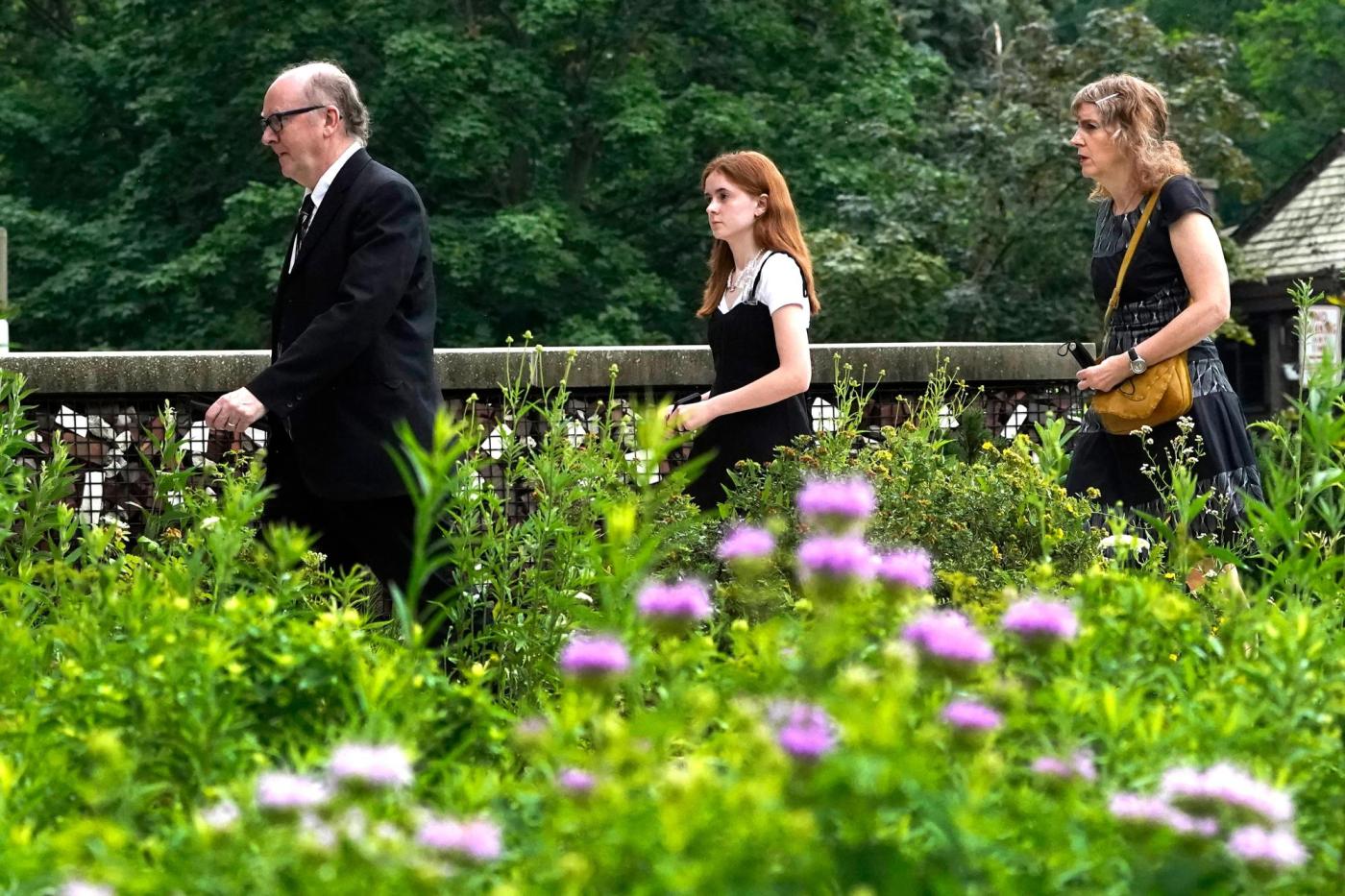 By KATHLEEN FOODY and CLAIRE SAVAGE

CHICAGO (AP) — Mourners on Friday remembered a woman who worked tirelessly at her synagogue and a gentle man who loved art in the first formal services to be held for the seven people killed by the gunman who opened fire on a July Fourth parade.

Synagogue members at North Shore Congregation Israel near the Chicago suburb of Highland Park described 63-year-old Jacquelyn Sundheim as a dedicated member of their community who coordinated events and taught preschool classes, smiling all along and constantly checking on other staff members.

“We are horrified,” Rabbi Wendi Geffen said. “We are enraged, sickened, aggrieved, inconsolable for the terror that has befallen us and robbed us of Jacki.”

But Geffen and other speakers urged the people filling the synagogue to focus on Sundheim’s life — her commitment to her husband, Bruce, and daughter, Leah, the pleasure she took in knitting and her attention to detail when planning bat or bar mitzvahs, weddings or funerals.

Her daughter had another request: to use the pain, fear and rage caused by her mother’s death to make the world better, in small thoughts and actions.

“I want you to laugh,” she said, holding back tears. “I want you to each and every day put a little more joy and kindness into this world. Do not let this sadness, this fear, rage turn you bitter towards our world. The world is darker without my mom in it, and it’s up to us now to fill it with a little extra laughter.”

Mourners also filled the Jewish Reconstructionist Congregation in Evanston to support the family of 88-year-old Stephen Straus, who was eulogized as a funny father and grandfather who loved reading and art and still rode the train five days a week to the downtown Chicago office where he worked as a financial adviser.

Son Jonathan described Straus as “truly to his core, just a sweet, generous person” while his other son, Peter, thanked his dad for instilling a love of the “zany” including Mel Brooks.

Jonathan Straus said learning of his father’s death from a doctor at a hospital “was the worst moment of my life.”

“Thinking about what a good, giving, loving person he was, it makes the cruelty and the horror of his death that much harder to take,” he said. “When I see pictures of him … it really just sweeps over me, what we’ve lost, who I lost, my best friend ever.”

A 2020 study by Brandeis University and the University of Chicago found Highland Park had among the Chicago region’s highest concentrations of Jewish residents — a fact reflected by the half-dozen or more synagogues in the suburb or just outside it. Many local restaurants offer kosher food options.

Neighboring Highwood is home to a large Hispanic population, and Mexican authorities have said two men killed at the parade were natives of the country.

One them was 78-year-old Nicolas Toledo-Zaragoza of Waukegan, where family and friends gathered Friday for services.

During a private family viewing preceding public services, a granddaughter left the church in tears. Family members encircled Yesenia Hernandez, trying to comfort her as she sobbed.

Several attendees wore T-shirts with a cross and an image of Toledo-Zaragoza grinning, wearing a brimmed hat and suit. In Spanish, the shirts read: “In memory of Nicolas Toledo,” and included words from Psalms 23:1 — “The Lord is my shepherd, I shall not be in want.”

Outside the church entryway, adorned with white and blue balloons, Toledo-Zaragoza’s sons, Alejo and Angel, spoke briefly about how they will miss their father’s love.

Services for 69-year-old Eduardo Uvaldo, also a native of Mexico, are scheduled for Saturday.

The family of 64-year-old Katherine “Katie” Goldstein issued a statement Friday that said her husband, Craig Goldstein, a hospital physician, has been touched by the number of people who have told him that she was their best friend. She devoted herself to motherhood and caring for her family.

“Raising our daughters, enjoying adventures together — I was living a fairy tale,” Craig Goldstein said.

The statement said she also loved being outside, visiting the Chicago Botanic Garden and involving her family in her passion for bird watching.

“She was the best mom in the world,” daughters Cassie and Alana said in the statement.

Police have repeatedly said that victims were shot randomly and that the assailant had no racial or religious motivation.

Funeral details for the remaining victims have not been made public. Authorities have identified them as 35-year-old Irina McCarthy and 37-year-old Kevin McCarthy, who were attending the parade with their 2-year-old son.

The accused gunman, Robert E. Crimo III, has been charged with seven counts of first-degree murder. Prosecutors expect to bring more charges representing the more than 30 people were wounded in the assault.

Investigators have said the suspect, who lived in neighboring Highwood, legally purchased five weapons and planned the attack for weeks before he climbed to the roof of a business along the parade route and opened fire with a semi-automatic rifle.

Investigators reported that Crimo fled the parade by blending in with the fleeing crowd, then drove to the Madison, Wisconsin, area, where he contemplated a second attack. He returned to the Highland Park area, and his car was spotted by police.

Questions remain about whether Crimo should have been able to legally purchase firearms in Illinois. Illinois State Police officials have defended the approval of his gun license in December 2019, months after police received reports that he had made suicidal and violent threats.

Savage is a corps member for the Associated Press/Report for America Statehouse News Initiative. She reported from Waukegan. Associated Press Writer Michael Tarm contributed to this report.