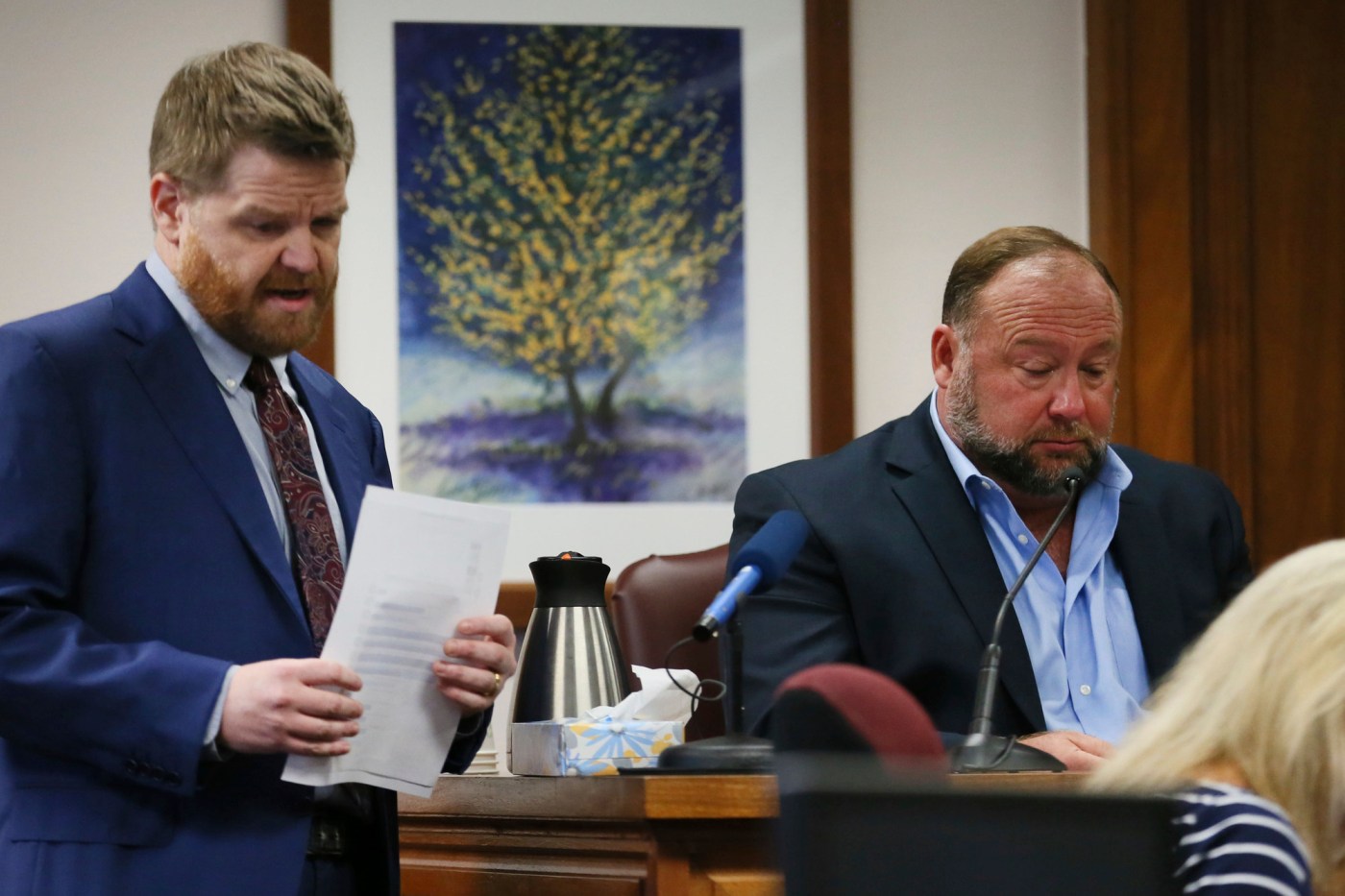 Right-wing talk show host Alex Jones will have to pay the parents of a Sandy Hook shooting victim a little more than $4 million in compensatory damages, a jury decided Thursday, capping a stunning and dramatic case that showcased for the public the real-world harm inflicted by viral conspiracy theories.

The award from the jury was far less than what the plaintiffs, Scarlett Lewis and Neil Heslin, had asked for. At the start of the trial, attorneys for Lewis and Heslin asked the jury to award their clients $150 million in compensatory damages.

A separate, shorter trial during which punitive damages will be discussed is now expected. Punitive damages are awarded when the court finds the defendant’s behavior to be especially offensive.

Mark Bankston, an attorney for the parents, told CNN they are “thrilled” with the jury’s decision, noting the jury hasn’t “even decided punitive damages” yet.

The decision from the jury is a partial ending to a years-long process that began in 2018 when Lewis and Heslin sued Jones and his company, Free Speech Systems, which is the parent of the right-wing media organization Infowars.

Jones baselessly said in the aftermath of the Sandy Hook shooting, in which 26 people were killed, that the incident was staged. Facing multiple lawsuits, Jones later acknowledged the shooting occurred. He testified in court this week that he now believed it to be “100% real.”

But Jones failed to comply with court orders during the discovery process of the lawsuit. His failure to do so led to Heslin and Lewis winning default judgments judgements against Jones.

Judge Maya Guerra Gamble ruled in October that Jones was legally responsible for inflicting emotional distress on Heslin and Lewis. Gamble also ruled that Jones was liable for defaming Heslin.

Jones claimed in his testimony that a jury award of just $2 million would destroy him financially.

But the accountant who is now in charge of overseeing Jones’ company Free Speech Systems, the parent of his conspiratorial media outlet Infowars, testified in bankruptcy court Wednesday that Jones withdrew about $62 million dollars from the company over 14 years, of which about $30 million was paid to the IRS.

And the accountant testified that Infowars had received about $9 million in cryptocurrency donations and that “they went directly to Mr. Jones.”

The decision to punish Jones in such terms also comes at a seismic moment in American society, where the lies and conspiracy theories have flourished in recent years.

The jury’s decision, while far lower than what the plaintiffs’ attorneys had asked for, sends a message to those who propel lies into the public conversation, whether for political power or financial gain, that there can be consequences for such behavior.

“Speech is free, but lies you have to pay for,” the Sandy Hook family attorneys argued to the jury during their opening statements and closing arguments.

During the trial, Heslin and Lewis offered emotional testimony, telling the jury that the lies pushed by Jones stained the legacy of their son Jesse and tormented them for years.

Fighting back tears at times, Heslin told the jury that Jones, through his conspiratorial media organization Infowars, “tarnished the honor and legacy” of his son. Heslin said that he couldn’t “even begin to describe the last nine-and-a-half years of hell” he has endured because of Jones, and described in detail how he fears for the safety of himself and his family.

In a remarkable moment in court, Lewis spoke directly to Jones, saying she wanted to address him to his face.

Lewis told the jury she feels monetary damages were appropriate in the case because she doesn’t believe Jones would otherwise ever stop his behavior.

“There has not been a sincere apology,” she said. “But if there was, ever, I liken it to being in a car accident and you run over someone and cause tremendous bodily damage and you look at that person lying on the ground and say, ‘I’m so sorry, I’m so sorry, I’m not accountable for any of the damage I just caused. But I’m sorry.’ That’s how I see it.”

Lewis also reflected on what it meant that the trial had to ever take place.

“It seems so incredible to me that we have to do this,” Lewis told Jones. “That we have to implore you — not just implore you, punish you — to get you to stop lying…It is surreal what is going on in here.”

The trial in Texas is one of three that is expected to play out over the next couple of months.

A different group of Sandy Hook families sued Jones in Connecticut. Those families also won a default judgment against Jones and a trial was scheduled to begin in September. But jury selection was suspended the same day it started earlier this week and the trial could be delayed because of a bankruptcy filing from Free Speech Systems.

Attorneys representing some Sandy Hook families have accused Jones of having drained Free Speech Systems of assets in recent years as part of an effort to protect himself from potential judgments he may be ordered to pay.

One of the attorneys, Avi Moshenberg, told CNN on Tuesday that the bankruptcy filing made by Free Speech Systems indicated that $62 million in assets had been withdrawn from the company in 2021 and 2022.

“If you look at the bankruptcy filing, leading up to the declaration of bankruptcy, Alex Jones, the sole owner [of Free Speech Systems], took $62 million in draws in 2021 and 2022,” Moshenberg told CNN. “Just straight up draws. That’s why the company has few assets.”