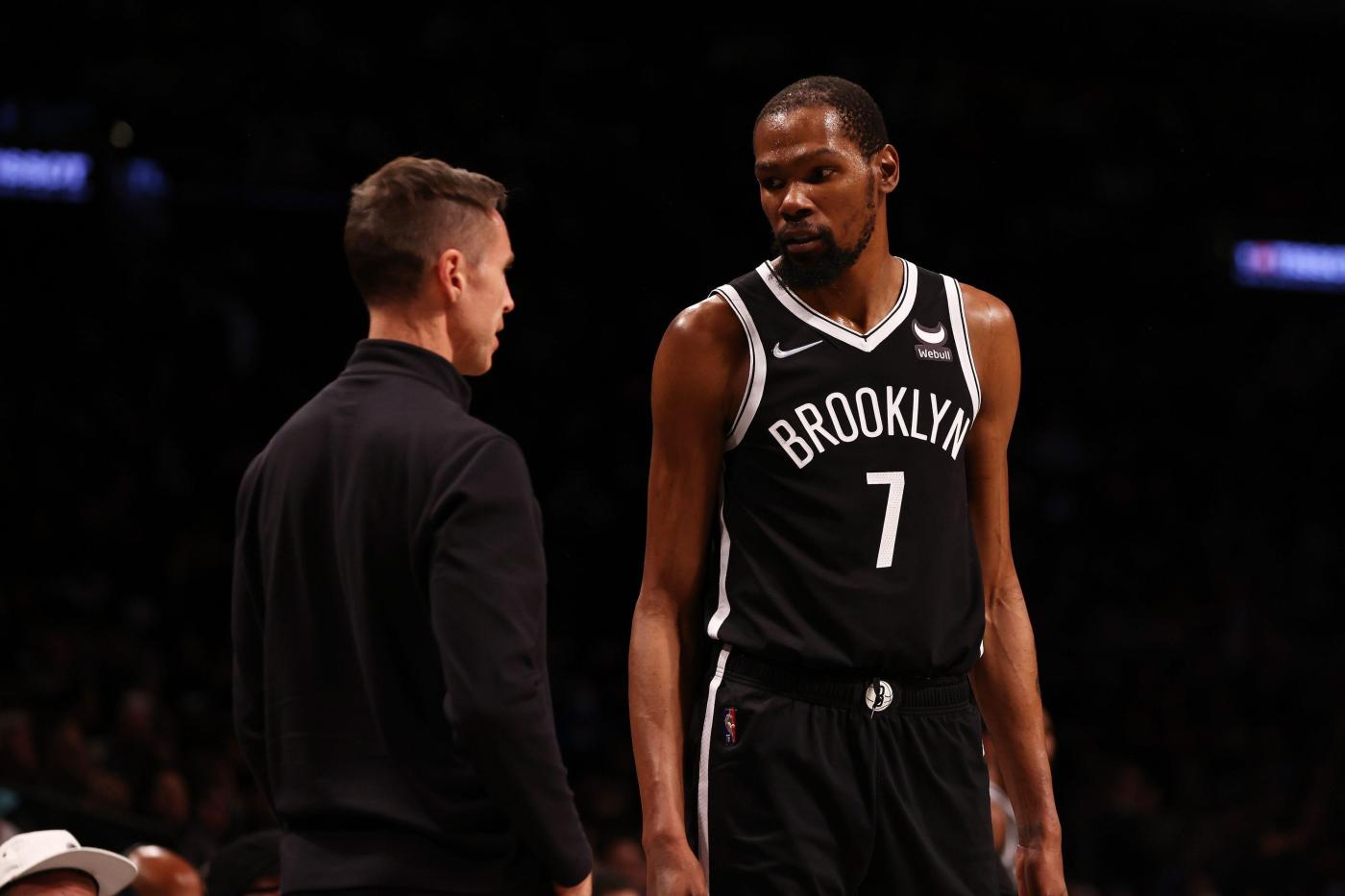 Kevin Durant has given Nets owner Joe Tsai an ultimatum: Tsai must decide between Durant, a 12-time All-Star universally regarded as one of the best basketball players in NBA history, and the pair of Brooklyn’s general manager Sean Marks and head coach Steve Nash.

Durant and Tsai met in London over the weekend, according to The Athletic, where Durant told Tsai he has lost faith in the team’s direction. And now Tsai must make a decision.

He must choose what type of ship he wants to run. In reality, that decision should have been made years ago.

The Nets should have known once they signed Durant and Kyrie Irving to contracts in the summer of 2019 that this was the stars’ show, not the other way around. It’s the sacrifice an organization makes to compete for championships every season with these particular players: Sure, Irving is going to miss a few games for personal reasons, and sure, Durant is going to send a tasteless DM that is going to be made public, but the Nets are going to be one of the most watched teams in all of basketball. The ceiling is going to be through the roof.

Every NBA superstar is unique. The way Steph Curry deals with his team will not be the way Jimmy Butler deals with his, or LeBron James and Kawhi Leonard theirs. Do Durant and Irving present unique, perhaps even exacerbating challenges to an organization? Sure. But that was entirely knowable walking into the arrangement. When Durant and Irving chose the Nets, and the Nets said “yes,” Tsai and Marks failed to read the terms and conditions.

The Nets’ rivals a train ride away, however, knew exactly how to play the game.

The Philadelphia 76ers made their pursuit of James Harden public by hiring his former Rockets GM Daryl Morey to the top executive role in Philly. They floated his former head coach Mike D’Antoni as a candidate to replace Doc Rivers. They ultimately traded for Harden last season, and this summer, they signed his two close friends – PJ Tucker and Danuel House – as free agents. They just might hire Harden’s stylist to make a point, too.

The Sixers have willingly handed the keys to their kingdom over to both Harden and Joel Embiid because they know the NBA is a star-driven league and keeping their stars happy gives them their best shot at competing for championships every year until the wheels fall off. Keeping their stars happy keeps their fans happy, and happy fans pay the premium for season tickets.

Keeping their stars happy is also far better than the alternative: Hoping one day a star wants to come to your organization, or praying on the ping pong balls to bounce in your favor, both of which are forms of NBA purgatory. Just ask the Indiana Pacers.

Yet here are the Nets, looking a gift horse in the mouth. They dismissed Adam Harrington, Durant’s longtime shooting coach. They hired Nash as head coach, even though he had zero qualifications for the job and leapfrogged a long list of candidates with experience on championship contenders. They also let go assistant coach Eli Carter, one of Irving’s friends, because of his decision not to get vaccinated against COVID-19, according to Bally Sports. And they traded Harden for Ben Simmons – who never played a game last season and just got back surgery this summer – Andre Drummond, who left for Chicago after one season; Seth Curry, and two first-round picks, one of which was used to acquire Royce O’Neale from the Utah Jazz. The trade destroyed any odds of the Nets making a playoff run and they were swept out of the first round by the Boston Celtics.

Meanwhile, Durant and Harden are still tight. They were videotaped celebrating artist Travis $cott after his performance in London over the weekend.

Given the Nets’ decision to entrust their eggs to Durant and Irving’s baskets, it would have been wise to treat the two like royalty. That’s not what happened when Irving exercised his personal (but unpopular) right not to get the COVID-19 vaccine, which would not have hindered his ability to play in any other city except Toronto and San Francisco. The Nets ostracized Irving from that moment, barring him from both playing in road games and participating in home practices. Who knows whether Irving and Harden would have built a better rapport if the Nets would have allowed Irving to play in the 16 road games he missed before re-incorporating him into the fold after a league wide COVID-19 outbreak?

That’s also not what happened a week after Irving said he wanted to “co-manage the franchise” alongside Marks and Tsai, when Marks came out and said he wanted players on the team who wanted to be full-time, a direct shot at Irving’s lack of availability last season.

Which brings us back to Durant’s ultimatum, an unenviable position for any team owner to face.

Tsai tweeted a short statement Monday evening, after the report had circulated: “Our front office and coaching staff have my support. We will make decisions in the best interest of the Brooklyn Nets.”

Should Tsai do Durant’s bidding and part ways with both GM and head coach? He claims both have his support, but again, it depends on what kind of ship he wants to run. It appears the Nets want to run a Spursian ship, which makes sense given Marks’ background with four years in San Antonio before taking the Nets job in 2016. The Spurs have been running the same ship for decades, but if their recent record is any indication, it’s talent that wins championships.

If you need proof, think about how their championship window slammed shut: The Spurs couldn’t appease their new-era superstar Kawhi Leonard, who forced his way out in a trade to the Toronto Raptors and went on to win a championship the very next season.

If the Nets wanted to run a Spursian ship, they should have done it with D’Angelo Russell, Caris LeVert, Spencer Dinwiddie and Jarrett Allen. They traded that away for Irving and Durant, failed to read the terms and conditions, and now their future hangs in the balance.

It’s either a future that includes Durant and Irving, or one built around Simmons, Marks and Nash.