Kim Kardashian showed off her flawless complexion while advertising her SKKN skincare line on Saturday.

The reality TV beauty, 41, went topless for the occasion, gazing into the camera over her shoulder, and wore her platinum tresses slowing down her back.

The savvy businesswoman also shared a behind the scenes look of her latest pajama collection that was officially launched for her SKIMS brand earlier Saturday. 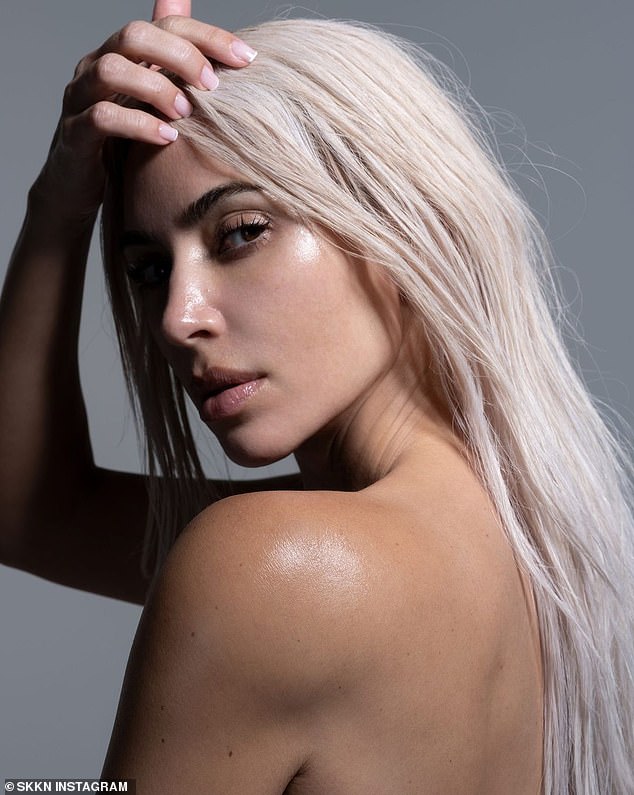 Flawless: Kim Kardashian went topless as she showed off her flawless complexion while advertising her SKKN skincare line on Saturday

The Keeping Up With The Kardashians star flaunted a few sets from the new ‘drapey’ pajama collection which she shared onto her Instagram story.

The businesswoman shared a few short clips onto her Instagram stories for her 330 million fans and followers to promote her new SKIMS collection.

The TV personality shared a video of a paper that showcased a visual of what the pajamas looked like.

‘I want you guys to see our drapey sleep, like what it looks like on a mannequin. It is so comfy,’ she explained in a voiceover, adding that the material is ‘comfy’ and feels like ‘cotton.’

The camera than panned away from the piece of paper to the items on hangers in a spacious room.

The set includes a ‘wrap top’ with long sleeves, and can be secured at the waist with a belt of the same material. The bottoms include long pants with an elastic waistband. 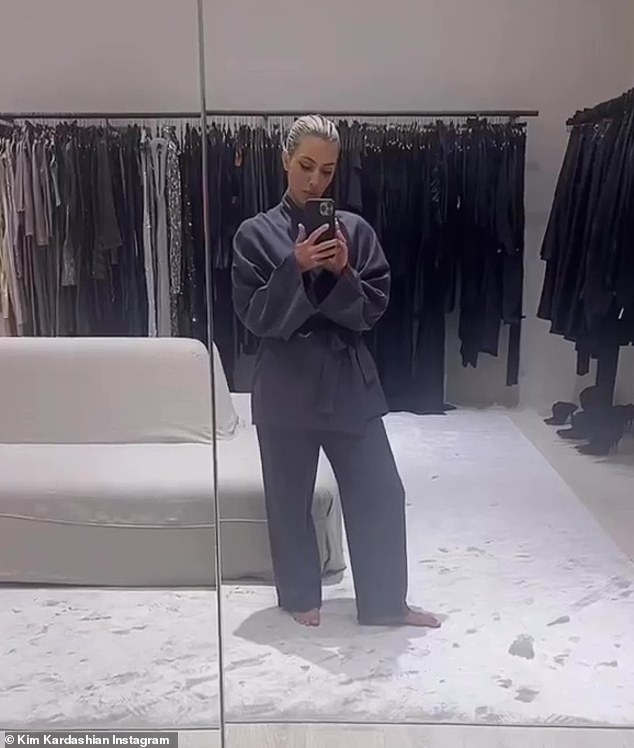 Stylish: The reality star appeared to be excited to talk about her latest collection which recently launched 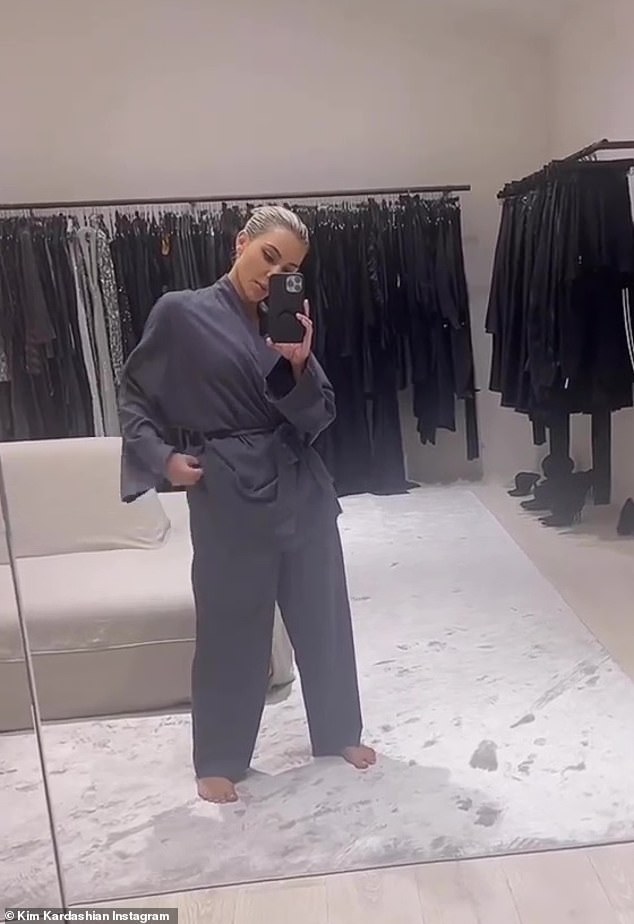 Stylish: Kim expressed that her new drapey pajamas set is very ‘comfy’ and also very ‘chic’ which she explained during a video on her Instagram story

Another clip switched to Kim holding her phone camera in the direction of a floor to ceiling mirror, to capture her reflection as she modeled both an ivory and ash-colored pajama SKIMS set.

Her blonde hair was slicked back into a tight, sleek bun to keep her hair from falling into her face.

The reality star could be seen standing on a soft, white rug with a large couch positioned behind her.

Numerous pieces of clothing could be seen hanging around her in what looked like a walk-in closet.

‘I am loving this style pajamas,’ Kim said out loud. ‘It’s like the same material as our Hotel SKIMS and it’s like a cropped pant with a pocket.’ She also revealed that the pajamas feel incredibly ‘soft.’ 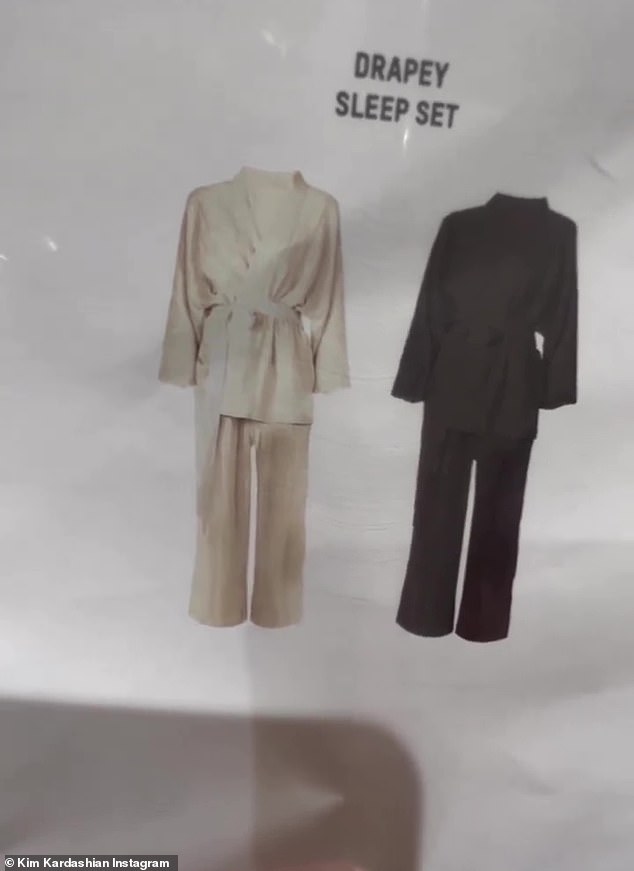 Behind the scenes look: Kim shared a sneak peak video onto her Instagram story of what the SKIMS pajama sets look like, including the ash and ivory colors that are available

To conclude the assortment of videos, Kim added that the set is not only ‘comfy’ but also very ‘chic.’

The new collection launched on the SKIMS website on Saturday, and is available in two colors which include an ash black and an ivory cream. The sets can be purchased at $128, according to the brand’s official website.

The entrepreneur has been busy and on-the-go, and recently returned to sunny Los Angeles after spending time in Milan.

The beauty not only debuted her Ciao, Kim collection at the Dolce & Gabbana runway show at the end of last month in September, but has also been pictured leaving photo shoot sets in the city. 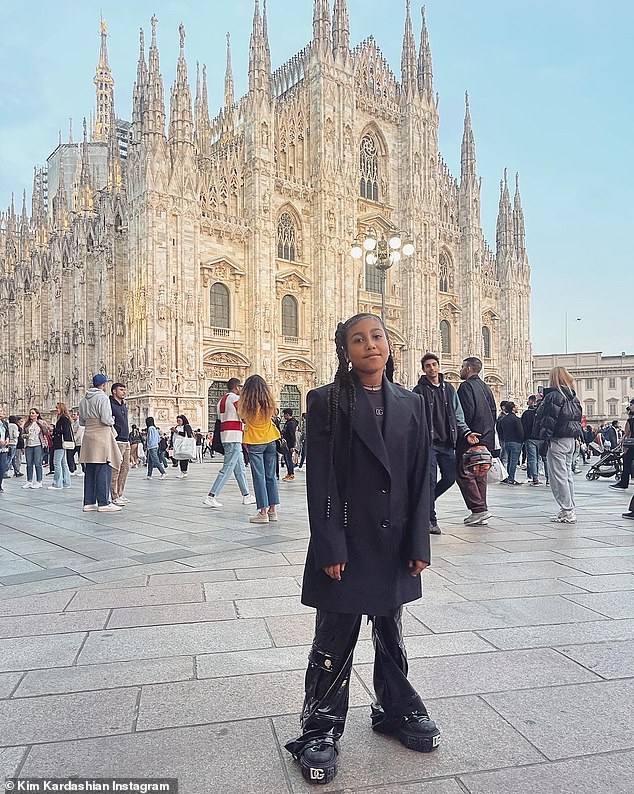 Wow! The SKIMS founder uploaded an adorable photo series onto her Instagram page showcasing her daughter, North, also enjoying some sites in Milan 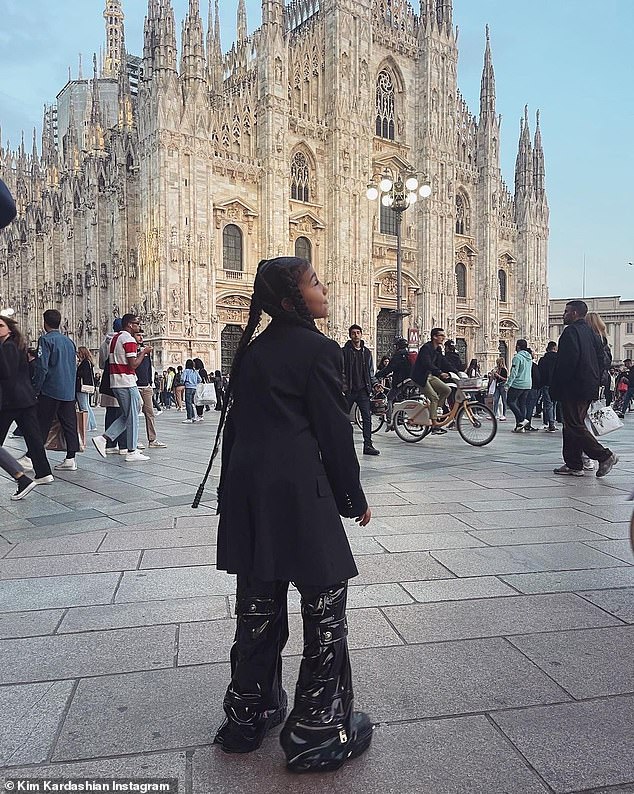 In the caption of the post, Kim typed out, ‘Site seeing.’ In the first snap, North could be seen posing in front of a main tourist destination in Milan called the Duomo di Milano, which is a gothic style cathedral.

The nine-year-old wore an all-black ensemble, which comprised of a long-sleeved black coat and pleather pants. She also wore a Dolce & Gabbana black shirt along with platform sneakers also from the luxurious Italian brand.

Another picture captured North inside the crowded Galleria Vittorio Emanuele II, which is an ornately structured building full of shops and cafes.

After a lavish and successful trip to Milan, Kim is back to work and launching new collections for her SKIMS brand while simultaneously studying to acquire a law degree. 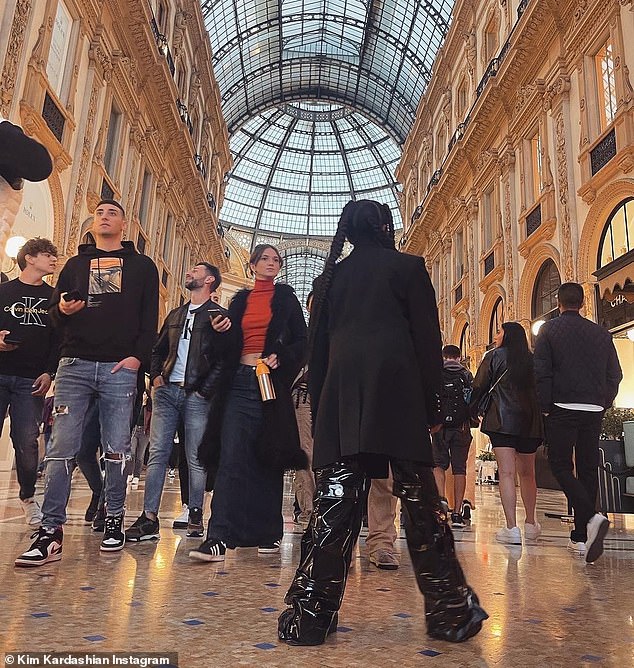 Posing: Kim’s daughter appeared to be having a blast as she posed for the camera as she enjoyed spending time in Milan