Alex de Minaur can’t forget this US Open beating fast enough after being sent packing from Flushing Meadows in a third-round shocker.

It was a cruel end to his tennis match against Pablo Carreno Busta, with the Spaniard pulling out the ‘tweener’ shot made famous by Nick Kyrgios to beat de Minaur on match point.

The Aussie was fighting to take the match to a decisive fifth set with a wave of momentum behind him after dropping the opening two sets 6-1, 6-1.

After bravely clawing his way back into the match, de Minaur could only smash his racquet into the court in frustration as he got beaten by a party trick that sailed just an inch too high for him to reel in.

The result ends a golden chance for de Minaur to go deep into the tournament where he has enjoyed his greatest success. The world No.20 reached the quarter finals in 2020 and the fourth round in 2019.

To be fair to his opponent, de Minaur probably shouldn’t have got as close as he did.

The aggressive service game of the big-hitting Spaniard netted 36 winners, five breaks of serve and a brutal two set advantage before he collected a back or adductor issue that slowed him down. 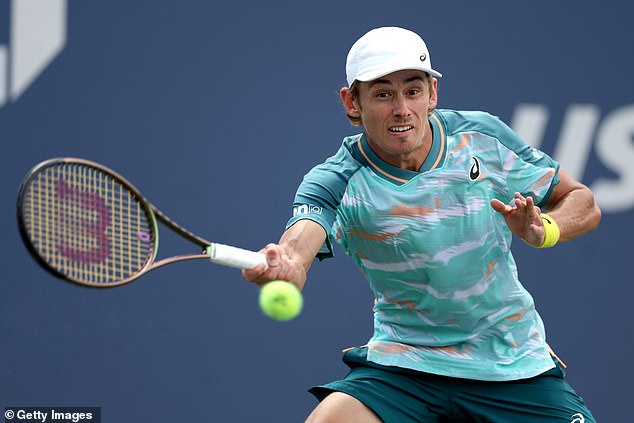 ‘Happy and extremely proud of the fight that I showed considering my level today.

‘At times, I found it very hard to make the court at all.

‘But I could have easily been into a fifth set right now just due to fighting and my attitude.’

De Minaur indeed threatened a famous fightback after winning the third set and taking the fourth to a tiebreaker.

Carreno Busta, the 12th seed, a two-time US Open semi-finalist and recent winner of the Montreal Masters, gave him hope after taking a medical time-out before the fourth set to have treatment for an apparent adductor or back issue.

The stoppage and gear change initially appeared to do the trick, with Carreno Busta holding serve to love immediately upon the resumption. 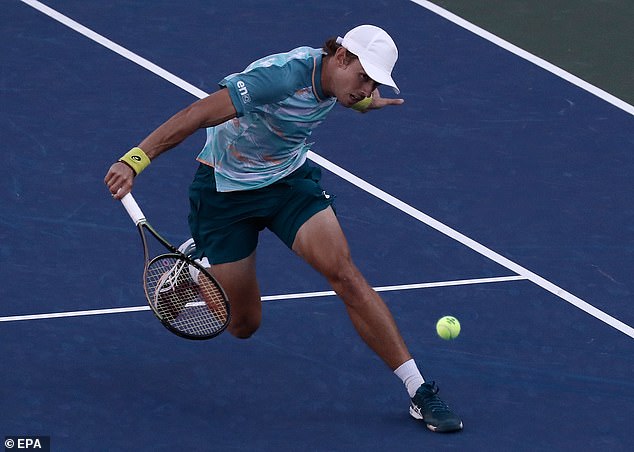 De Minaur’s confidence grew, though, and the match seemed headed towards a deciding fifth set before the Spaniard won a remarkable match point.

After being lobbed, Carreno Busta didn’t look a hope of reaching the ball but somehow managed to play a tweener over de Minaur’s head.

De Minaur could only manage to get a frame to the ball before throwing his racquet down in anguish at losing the match.

De Minaur’s best grand slam results have consistently come in New York, with the world No.20 reaching the quarter-finals in 2020, the last the year before and the third round on two other occasions.

But Carreno Busta ultimately had too much firepower. 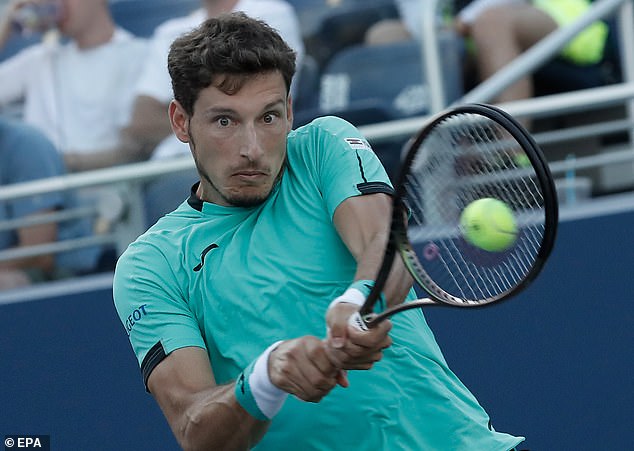 The big-hitting Spaniard bludgeoned 36 winners, broke de Minaur five times and dropped serve only once to progress to the fourth round in three hours and 33 minutes.

‘Look, honestly, I didn’t even give him a chance to miss. That’s where I see it,’ a disgusted de Minaur added.

‘I was finding it hard to make a ball in the court and that’s something that I can’t give a reason for. It was just one of those days.

‘I’ll just try to put this behind me as quickly as I can and be ready for the next events.’