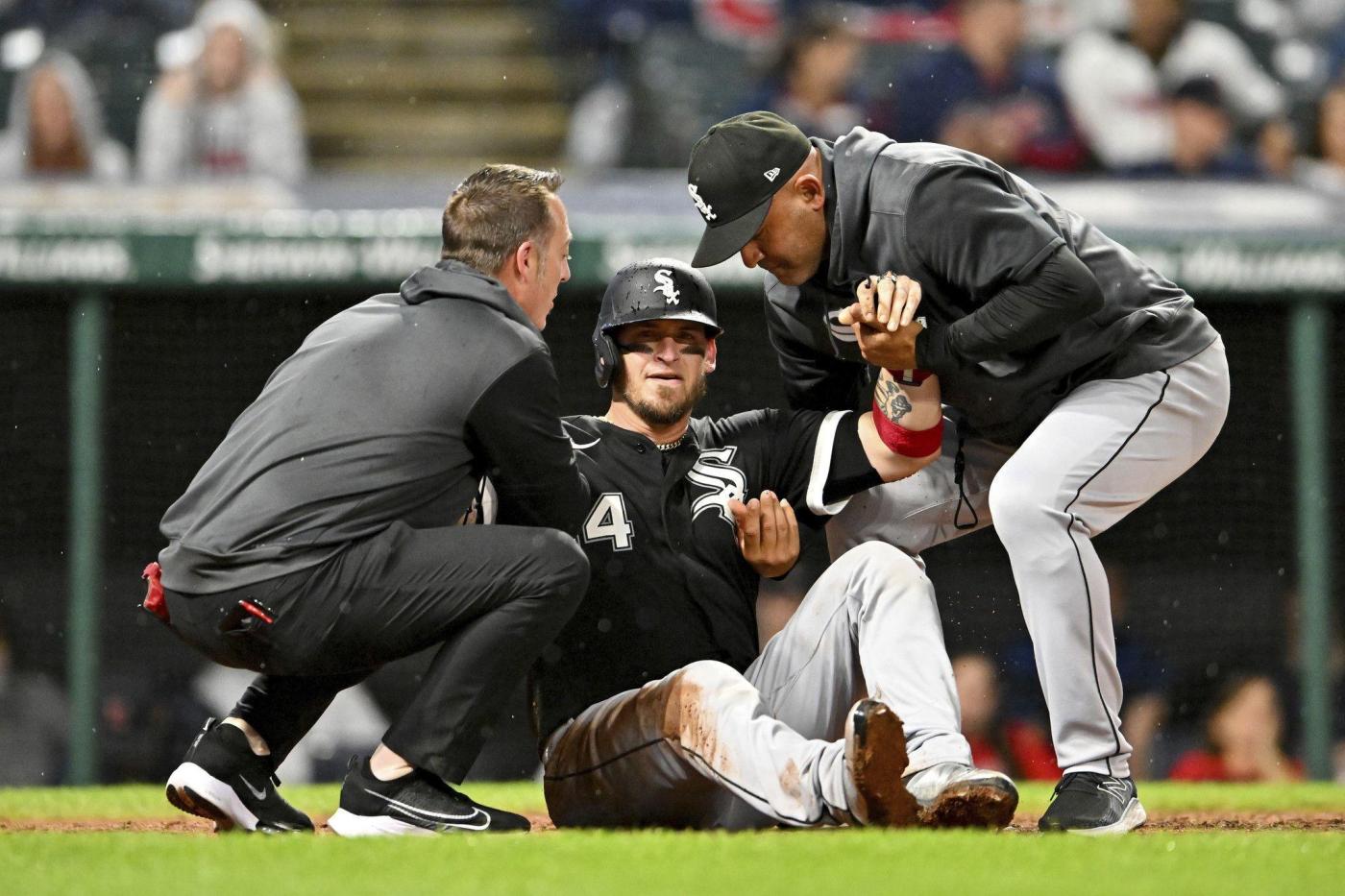 Yasmani Grandal singled to left to begin the seventh inning for the Chicago White Sox against the Cleveland Guardians Saturday at Progressive Field.

He advanced to second on a wild pitch and attempted to score when Elvis Andrus singled to center, but was out at the plate. Grandal, in trying to avoid the tag, grabbed his left knee and fell to the ground. He had to be helped off the field.

The Sox will be without the catcher after placing him on the 10-day injured list with a left knee strain, one of three roster moves announced Sunday.

The Sox also selected the contract of catcher Carlos Pérez from Triple-A Charlotte and transferred pitcher Kyle Crick to the 60-day IL. Crick has been on the injured list since June 14 with right elbow inflammation.

An examination of Grandal’s left knee revealed no acute damage to the ligaments, tendons or cartilage around the knee, the Sox said. He is dealing with inflammation caused by the hyperextension of the knee and will progress as tolerated.

Grandal is preliminarily projected to return to play in 10-14 days.

He has a .203 batting average with five doubles, three home runs and 21 RBIs in 74 games. This is his second time on the IL this season. He was out June 12-July 22 with lower back spasms.

With Grandal unavailable, Seby Zavala steps into the starting role behind the plate. Zavala is slashing .279/.326/.395 with nine doubles, two homers and 18 RBIs in 41 games.

“When he came up in (last) season, you could tell he’s got talent but he was kind of new,” Sox manager Tony La Russa said. “(The) start of (this) spring training, he was a different guy. The experience really benefited him. He’s got hits, he really relates to pitchers, he’s quick with the release.

“He’s got a nice career ahead of him.”

“I’m so happy,” Pérez said. “Working hard every day trying to get here. I’ll try to do my best here.”

Pérez said he picked up a lot from previous interactions with Grandal.

“He worked in spring training with me and couple of weeks when he rehabbed in Charlotte,” Pérez said. “Good man, I like him.”

La Russa did not have any issue with third base coach Joe McEwing waving in Grandal.

“I know at least five of us, we all saw Yasmani got a great break (from second), we all saw the break,” La Russa said. “We saw where the ball was hit. We have had trouble getting the run home from third. We all said send him. What happened was he looked back. So he lost steps and then he made a turn. I don’t think you can blame Joe.

“If you are having trouble scoring runs, you should lean to more aggressive not less aggressive — I’m not talking without sense. So in that case there, as soon as that ball is hit, (Grandal) is moving. That’s what Joe saw. He made the right call. It just turned out with an injury.”