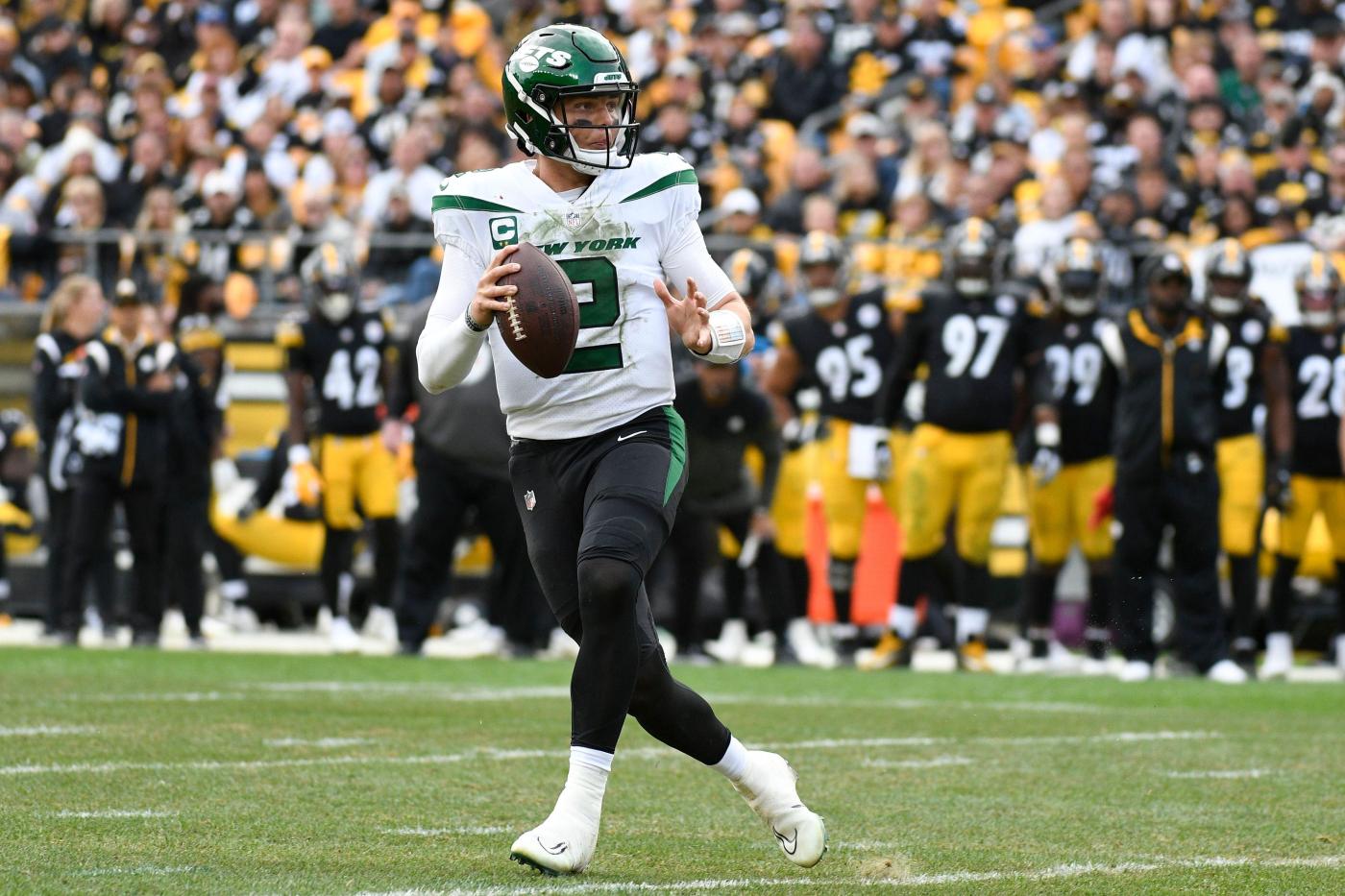 PITTSBURGH — Down 20-17 with 3:34 left in the fourth quarter, Jets quarterback Zach Wilson had a simple but straight-to-the-point statement for his team in the huddle as the drive started.

“Let’s score a f’ing touchdown,” Jets running back Breece Hall said after the game. “So that was our whole mentality.

“We weren’t really flustered or nervous. We just felt like we have to take one play at a time and we did that.”

The Jets certainly did that as Wilson and the Jets were once again the best when the chips were down and the stakes were high in the fourth quarter. Wilson completed only 8 of 24 passes for 124 yards and two interceptions during the first three quarters.

In his first game back seven weeks after suffering a bone bruise and a meniscus tear, the second-year quarterback completed 10 of 12 passes for 128 yards and a touchdown during the game’s final 15 minutes.

After being down 20-10 midway through the fourth quarter, Wilson led the Jets 91 yards, ending with a five-yard touchdown pass to receiver Corey Davis.

Then in the final drive, Wilson was a perfect 5-for-5 which helped get the Jets into Steelers’ territory within three minutes. That set up Hall’s one-yard touchdown run with 16 seconds left as he just crossed the plane of the end zone.

“He doesn’t flinch,” Jets coach Robert Saleh said. “There were a couple of plays that I’m sure he wishes he had back. The young man doesn’t flinch.

“He got us out of a lot of bad situations with his mobility. I thought he played a pretty good game for his first game back.”

It took a while for it to manifest, but Wilson gave the Jets’ offense something it had been lacking the first three weeks of the season. Not only did Wilson show poise to evade defenders when pressure was coming his way, but he also kept a cool, calm demeanor, something that wasn’t always evident at times last season.

As a rookie, Wilson sometimes forced passes into coverage and tried to put the game on his back instead of allowing his teammates to help him. Although Wilson showed rustiness and displayed some of those same rookie mistakes, he was able to overcome his errors to help the Jets come back from 10 points down in the fourth quarter for the team’s second comeback victory of the season.

“He balled out,” Michael Carter told the Daily News. “He’s been balling, he was showing out.

“I think the thing that I’m most proud of today is his calmness in the pocket. Everybody knows what he’s capable of, but you still have to go out there and do it and that’s not the easiest thing in the world.

“He showed some composure today.”

Now unlike two weeks ago, the Jets are hoping the return of Wilson and another come-from-behind win will help catapult them as the season goes on. Gang Green has a challenging five games before its bye week.

The Jets are still trying to find their identity offensively, especially with Wilson back from injury. With backup Joe Flacco starting the last three weeks, the team averaged 52 pass attempts a game. That was not the case with Wilson back as Gang Green relied more on the rushing attack as well as the pass as evident by Hall’s 66 yards on 17 carries.

The jury is still out on if Wilson is the Jets’ answer at the quarterback position. However, if he can continue to show signs of maturity along with leadership qualities, the team will continue to have confidence that they can come back from any deficit.

“I thought this was probably the most comfortable I’ve ever felt from a pregame standpoint coming into a game,” Wilson said. “Of course, my expectation was that nothing is going to be perfect because it’s not. It never is.

“I felt like I had the right mentality and I felt like everybody else did as well. I feel like emotions, the ups and downs of the game.

“I spent a little time throwing with the guys and got on the same page. Second year, having a little bit of experience and knowing what to expect.”