Australian captain Lleyton Hewitt has lashed out at Davis Cup organisers for not allowing his team to play the final on home soil as Canada took the title with a comprehensive win on Sunday in Spain.

First, Thanasi Kokkinakis was put to the sword by Denis Shapovalov before Alex de Minaur got shredded 6-3 6-4 by Felix Auger-Aliassime as Canada lifted the men’s World Cup of tennis for the first time in the competition’s 122-year annals.

But Australia’s frustrating 19-year wait for a 29th title goes on after their courageous, unexpected run to the final in Malaga ended with the searing quality of two top-20 stars proving too much for Lleyton Hewitt’s battlers.

‘I’m gutted for the boys. They’ve put in the commitment and the work and done absolutely everything right all year,’ said Hewitt.

‘They left it all out there once again; we came up slightly short, but I couldn’t be prouder – and all of Australia should be proud.’

Earlier, Hewitt lashed out at organisers for putting Australia at a disadvantage before the final even started.

Changes to the competition’s format have done away with five-set matches and switched to neutral venues for finals. 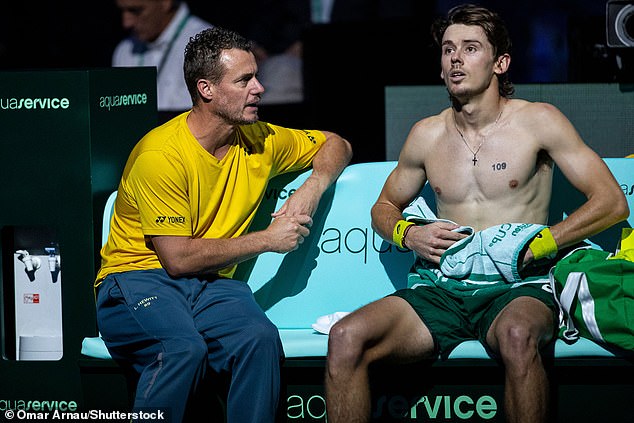 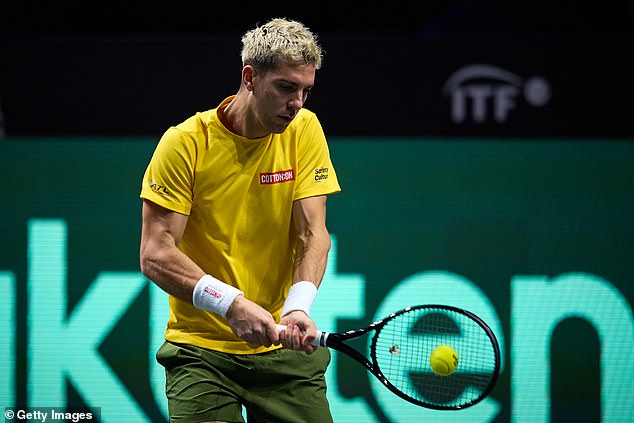 Thanasi Kokkinakis (pictured) branded himself ‘pretty much useless’ after falling to Denis Shapovalov in straight sets, 6-2 6-4

‘When it [the Cup] changed to this format, it was only ever going to be twice a year, so we have added on another week. It’s been a bloody long year for everyone, and we are a long way from home, too. Don’t forget that.

‘I don’t like the chances of this final series ever being played in Australia.’

It was such a comprehensive win – the most one-sided of the entire finals week – that there was no need for a deciding doubles, which would have featured the Aussie pairing of Jordan Thompson and Max Purcell against Auger-Aliassime and Vasek Pospisil.

No team without a top-20 player has won the title since Argentina in 2016 and that lack of an Australian world-beater was glaring on Sunday (Monday AEDT) as they missed out on a first triumph since 2003.

After a dejected Kokkinakis was left scolding himself for being ‘pretty much useless’ in his 6-2 6-4 shredding by an inspired Shapovalov, the never-say-die Australian No.1 de Minaur knew he’d need a potentially career-defining win over Auger-Aliassime.

The big names were out in force among the 9500 crowd at the Palacio de Deportes Jose Maria Martin Carpena in the Spanish resort, with Novak Djokovic bringing his son along to watch and soccer star Gerard Pique, overlord of the new-look Davis Cup, in the VIP tribune.

And they were all wowed by Auger-Aliassime, who looked every inch the future grand slam winner that has long been seen as his tennis destiny. Maybe even in Melbourne in January?

‘It’s a dream come true,’ beamed the 22-year-old, who’d won the junior Davis Cup title with Shapovalov in 2015 in a partnership that could now go on to dominate the senior competition after two finals in three years. 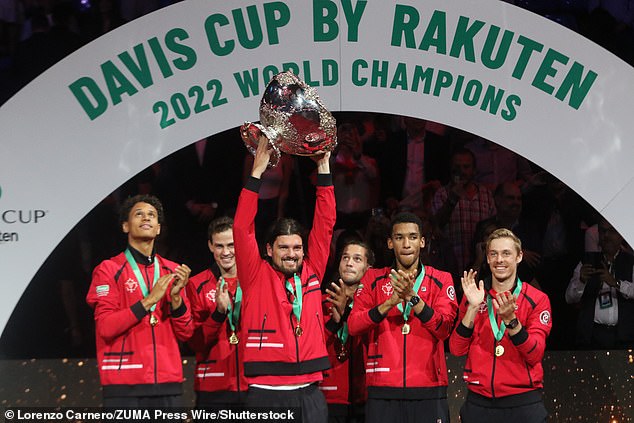 ‘It’s a special team. Hopefully, this generation will be able to bring this very far.’

De Minaur was a picture of misery after the world No.6’s languid power eventually overwhelmed his defiance.

The Canadian’s brilliance makes him look a good bet at the Australian Open next year, but even in the final game, as he dug out an incredible backhand counter-punch to move 30-0 ahead on Auger-Aliassime’s serve, de Minaur just wouldn’t surrender.

‘It’s tough, but so many Australian Davis Cup players have followed our journey throughout the whole year every step and were riding this roller coaster with us. It just shows what a family this Australian Davis Cup team is,’ said Spanish-based de Minaur, whose family turned out to cheer. 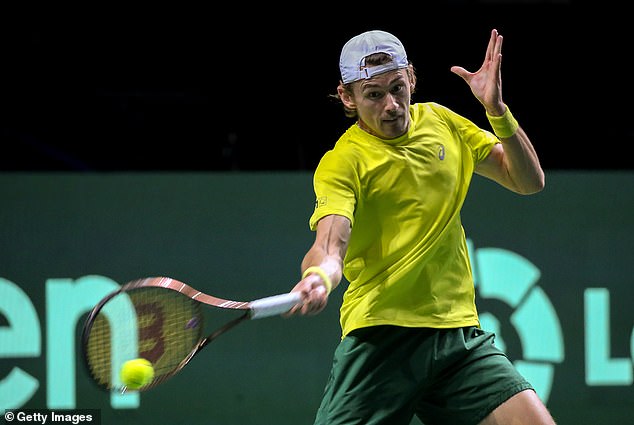 Shapovalov, who’d had a mixed week in Malaga and struggled with a back problem his semi-final loss on Saturday, chose the perfect time to display his full repertoire of knifing skills against the outclassed Kokkinakis.

Whether Kokkinakis, who’d lost his semi-final rubber with Croatia’s Borna Coric, should have been chosen rather than Thompson, who’d won his quarter-final singles rubber, was debatable – and, in truth, probably neither could have coped with Shapovalov in this mood.

Kokkinakis, who hadn’t played a tour singles match for eight weeks before Malaga, struggled against the world No.18, who sprayed 23 winners in all with rapier-like shots off both wings in an 89-minute lesson.