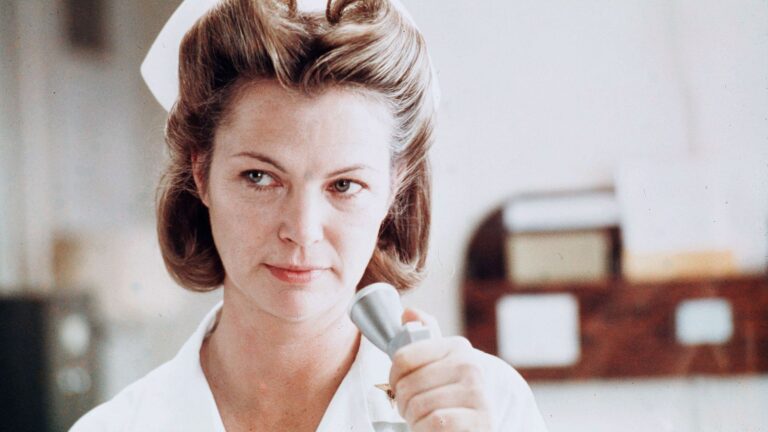 Louise Fletcher, the Oscar-winning actress known for her portrayal of Nurse Ratched in One Flew Over The Cuckoo’s Nest, has died aged 88.

Fletcher’s agent said she died at her home in France.

The actress set a new standard for screen villains when she played opposite Jack Nicholson in the 1975 movie, for which she would win the Academy Award for best actress, a BAFTA and a Golden Globe.

The daughter of deaf parents, the Alabama native was taught to speak by her aunt and from an early age showed an interest in acting.

She made her professional debut in 1958, but she was relatively unknown in Hollywood when she took on the role of Nurse Ratched – she was in her early 40s and had just returned to acting following an 11-year break to raise her two children.

Director Milos Fletcher chose the late-blooming star after many more prominent stars – including Angela Lansbury and Ellen Burstyn – turned down the role.

She made one of the most touching acceptance speeches in Oscar history when she became the first person to use sign language – using the moment to speak directly to her parents from the stage.

“I want to say thank you for teaching me to have a dream,” she said while signing. “You are seeing my dream come true.”

Prior to her Oscar’s success, Fletcher’s career was often hampered by her height. At 5 feet 10, she would be dismissed from an audition immediately because she was taller than the leading man.

But following One Flew Over The Cuckoo’s Nest, she would work steadily for the rest of her life, including guest spots on TV shows that saw her nominated for two Emmys.

The actress had an extensive and varied set of credits and was well known for her recurring role as a villain in Star Trek: Deep Space Nine.

Paying tribute to her on Twitter, the Star Trek account said: “With the passing of Louise Fletcher, the world has lost a truly lovely woman, who made us all deeply love to hate her.”

She was married to Hollywood literary agent Jerry Bick – who died in 2004 – but the pair divorced in 1977.

She is survived by two sons, John Dashiell Bick and Andrew Wilson Bick.