The man who was arrested after grabbing the Royal Standard flag draped over the Queen‘s coffin at her lying in state did so because ‘he did not believe she was dead’.

He was allegedly going to write to members of the Royal Family and if he did not hear back, he had planned to try and go and speak to the Queen himself.

When the 28-year-old was asked what he would do if he was unsuccessful, he revealed to the court that he would continue to trespass for ‘as long as he was living’.

Khan, appearing at Westminster Magistrates’ Court today, left the queue in Westminster Hall on Friday night as he rushed at the coffin while the late monarch was lying in state.

The court heard that he was suffering from delusions and believes that King Charles has something to do with the Queen’s death.

The live feed which was showing the thousands of mourners filing through Westminster Hall was briefly cut away as the man was tackled to the ground by police officers.

Khan was arrested at the scene and appeared at court today, charged under Section 4A of the Public Order Act.

Prosecutor Luke Staton said that Khan was among 250,000 mourners who filed through the hall between 5pm Wednesday until early Monday morning as members of the public travelled from far and wide to pay their respects to the Queen before her State funeral. 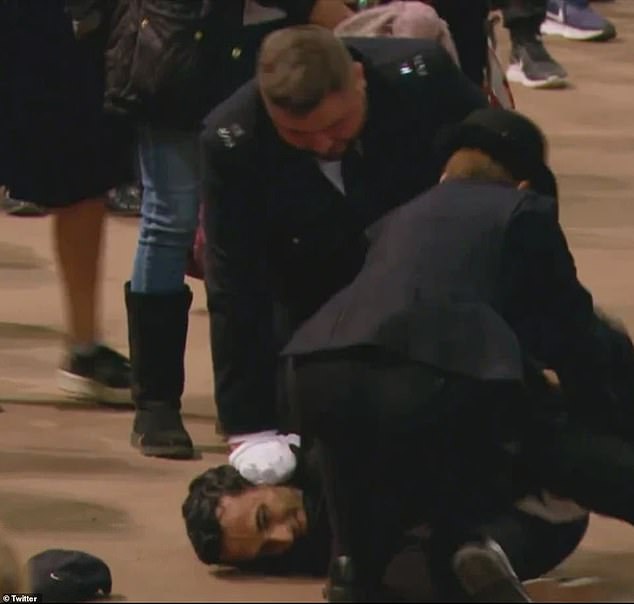 Muhammad Khan, 28, approached the Queen’s coffin because he did not believe she was dead, a court heard. Officers quickly detained him during his attempt 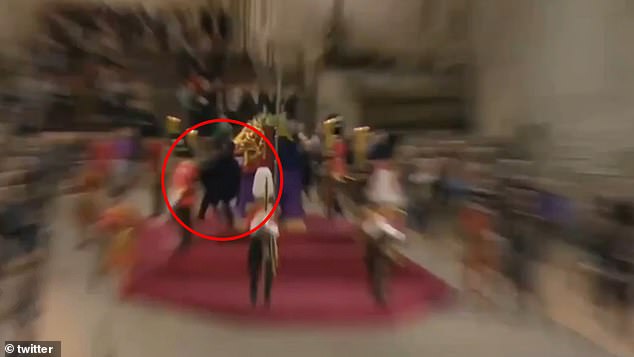 A video grab posted to Twitter shows the moment of the incident at Westminster Hall. Police officers are tackling the man, circled, as he lifts the Royal Standard off the Queen’s coffin

‘The defendant had reached Westminster Hall. He was then seen by officers, who were present, to approach the coffin,’ he said.

‘He stepped off the carpet in the direction of the catafalque, then grabbed hold of the Royal Standard flag draped over the coffin with both of his hands.’

The court heard that Khan was quickly detained, arrested and interviewed by police.

‘The defendant did express the idea that the Queen is not dead and that he approached the coffin because he wanted to check for himself,’ said Mr Staton.

‘He did say, prior to the state funeral, he was planning on going to the funeral.

‘He planned to write to the royal family and if they did not reply he planned to go to Windsor Castle, Buckingham Palace and Balmoral to try to speak to the Queen.’ 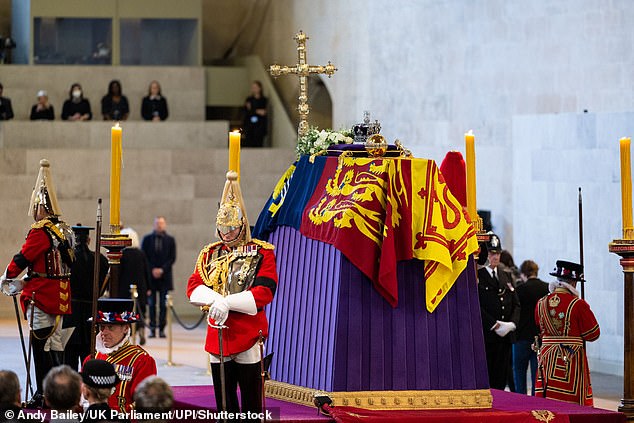 The Queen had been lying in state at Westminster Hall as around 250,000 mourners filed past 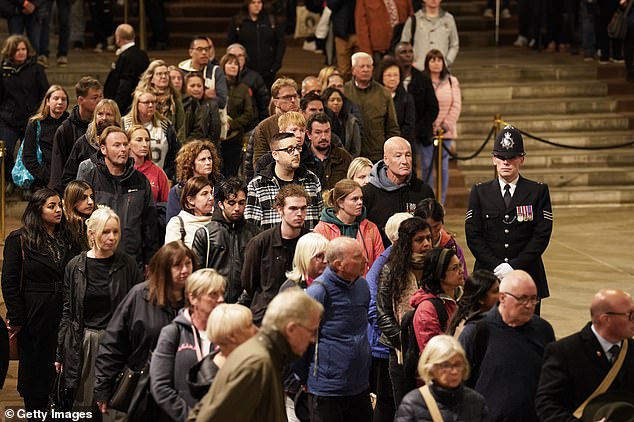 The court heard Khan said if he was unsuccessful: ‘I would have to trespass in order to try and make contact,’ and when asked how many times he would try, replied: ‘As long as I’m living.’

District Judge Michael Snow did not ask Khan, who was not represented by a lawyer, after doctors had assessed him as not fit to take part in proceedings.

The court heard he was suffering from delusions and the judge told him: ‘At the time when you were in Westminster you didn’t accept that the Queen was dead and that was the reason you were moving towards the coffin to satisfy yourself that she was.’

He added: ‘He is delusional still and thinks the Queen is not dead, thinks King Charles has something to do with it and may go to Windsor Castle to pay his respects but also because he still thinks she is alive.’

Khan spoke to confirm his name, date of birth and that he was staying at a friend’s address in Wood Green, north London, during the hearing.

The judge granted him bail on condition he remains in an east London mental health hospital until his next appearance at the same court on October 18. 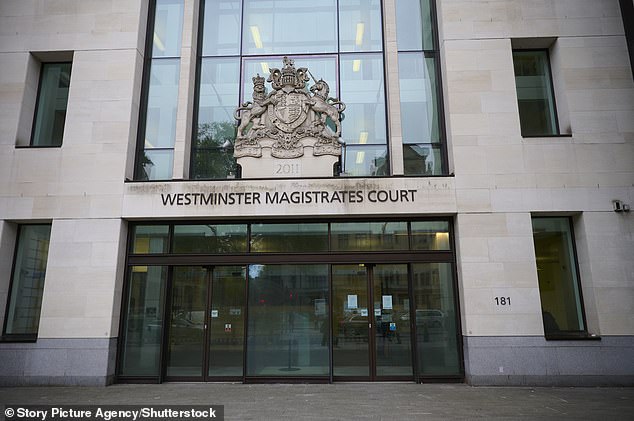 It comes after Mark Hague, 52, admitted a charge under Section 5 of the Public Order Act on Monday after he was escorted from the queue in Victoria Tower Gardens on Saturday morning.

A mourner raised the alarm after Hague was heard to say: ‘I will tell her to get out of her f****** coffin because she’s not dead.’

Westminster Magistrates’ Court heard Hague was arrested after he became abusive to police officers and members of the public as he was led away from the scene.

Hague was fined £120, which was deemed served because of the time he had spent in custody, but fined a further £120 as he was the subject of a conditional discharge for a previous assault on an emergency worker.

He allegedly exposed himself and pushed into mourners from behind as they waited in the line at Victoria Tower Gardens on Wednesday.

Adeshine is said to have gone into the River Thames in an attempt to evade police before coming out and being arrested.