Masks are back on BART, in agency’s fourth flip-flop since April 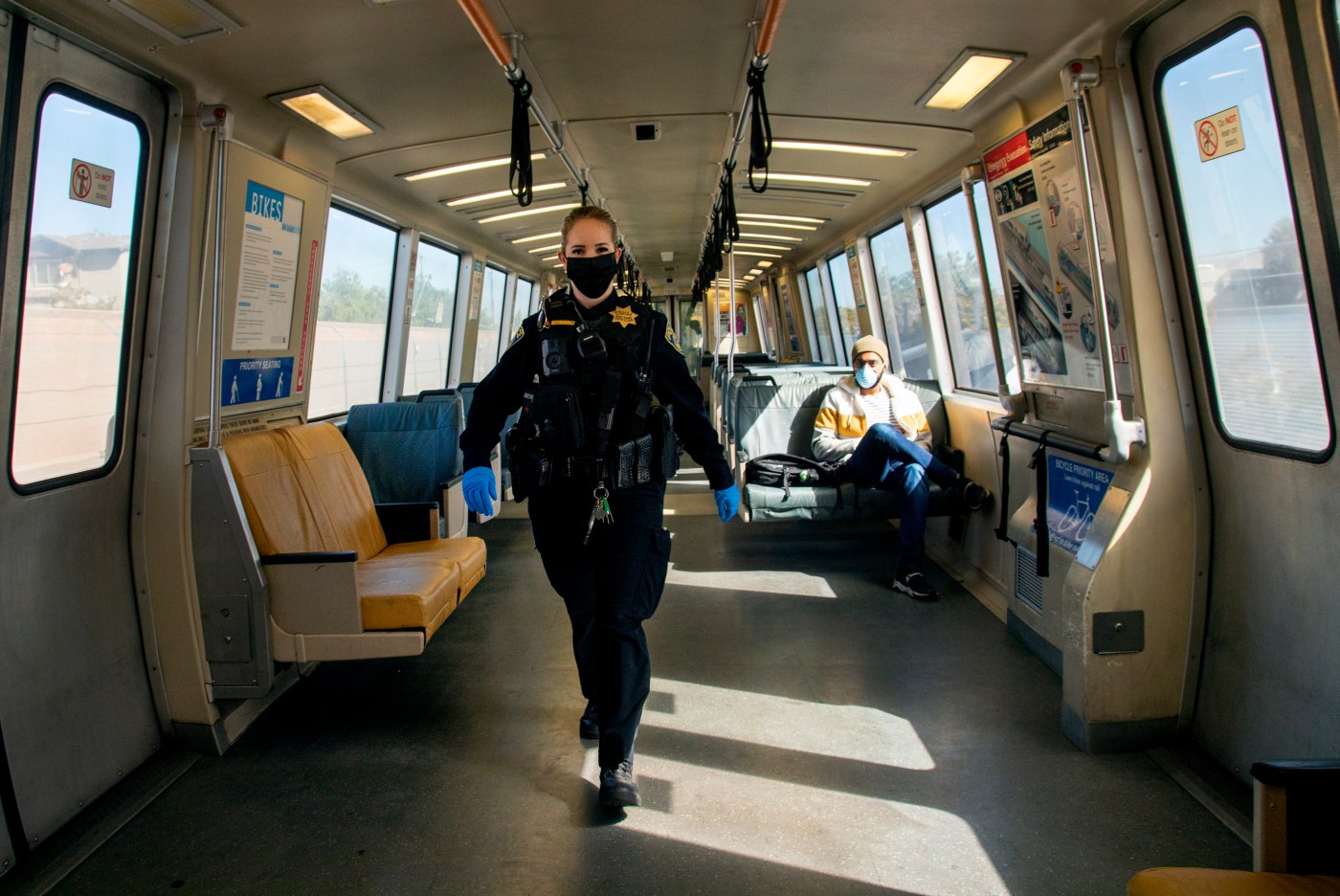 After a two-week lapse of its mandatory mask policy, BART riders are required to mask up once again, effective immediately, after the transit agency’s board of directors voted Thursday to reinstate a face covering requirement through September.

The six to two BART board vote, which impacts the system’s 50 stations, puts BART at odds with county health officials who have largely rescinded their mask mandates months ago even as the entire Bay Area is within the CDC’s highest tier for COVID-19 transmission risk.

Only one other Bay Area transit agency — East Bay’s AC Transit — still requires masks. Los Angeles County was expected to renew its indoor mask mandate this week, but officials ended up going back on that plan, citing a downward trend in COVID cases and hospitalizations.

Rebecca Saltzman, BART’s board president, said the agency has been disappointed by a lack of transparency from the counties in which BART operates, leading the rail operator to stake out its own mask policy.

“The counties haven’t even shared what their measures will be to reinstitute requirements,” Saltzman said before the meeting. “We know cases are high right now. If this isn’t enough to trigger a mandate – what does?”

BART Director Debora Allen voted against renewing the mandate, citing concerns that BART police’s limited enforcement is eroding riders’ trust. So did Director Robert Raburn, stating that he would not support such a policy until the public health departments endorsed it. Director Lateefah Simon was absent.

BART’s masking policy is among the most erratic in the Bay Area. It has changed four times since April, including a two-week pause in mandatory masks that started on July 18.

The agency’s board has been grappling with decisions over mask mandates since a Florida court voided President Joe Biden’s federal mask requirement. That allowed transit agencies across the country to drop face-covering rules and led to scenes of airline attendants discarding masks midflight.

While airports and nearly every other transit agency in the Bay Area have ditched masks, a majority of the the BART board has been receptive to calls from advocates to protect their elderly and immunocompromised riders.

“Public transit is an essential public service and unlike a lot of other places, it’s just not optional,” said Raia Small, a community organizer with Senior and Disability Action.

Nearly two-dozen people called into BART’s virtual board meeting Thursday, the vast majority of whom were in favor of reinstating the transit agency’s mask mandate. Mark Chekal said he lives in Berkeley and commutes to his job as an essential worker in San Francisco. Though he has been driving, he’ll have to go back to riding BART in the next few weeks, when he will lose his parking spot at his job. Chekal said he caught COVID-19 recently, despite being vaccinated five times, and got “pretty sick.” As someone who is immunocompromised — he takes medication for rheumatoid arthritis that reduces his ability to fight infections — having a mask mandate on BART is important to him.

Jordan Davis, on the other hand, objected to continuing the mandate in the face of widespread adoption of COVID vaccines.

“I’m sick and tired of mandates, and most of the rest of the country is too,” she said. “There may have been a time when mandates were necessary, but those days have passed.”

Although the Bay Area’s COVID rates dropped in recent days, the Bay Area’s public health metrics are worse than when BART renewed its mask policy in April. The new policy does not include children younger than 2 and people unable to wear masks due to medical conditions.

BART’s board will reconsider the mask rule during a Sept. 22 board meeting, but Saltzman said the agency cannot “keep mask requirements forever” unless there is some support from public health officials. Saltzman cited declining face mask compliance on trains. According to BART data tracking mask wearing from 7:00 am to 8:30 pm, 89% of people donned a face covering in June, down from 97% in January.

Riders also complain that people often don’t wear masks at night, and passengers without face coverings face little repercussions. At a board meeting in April, Ed Alvarez, the BART police chief, said seven people were issued mask citations since the start of the pandemic. On Thursday, Alvarez said BART police will continue focusing on educating riders and handing out free masks, only issuing citations or removing people from BART as a last resort.

Saltzman on Thursday recognized the awkwardness of BART becoming one of the only agencies in the country to require masks. She acknowledged that as a transit agency, BART is not the one that should be making these decisions. But, she said, public health officials have failed to act. BART reached out to county officials to ask whether they planned to reinstate mandates, and received few responses, she said.

“We’re left in this tremendously difficult situation,” Saltzman said, “where we are not the best people to do this, but we are the only ones left because other decision makers have failed us.”