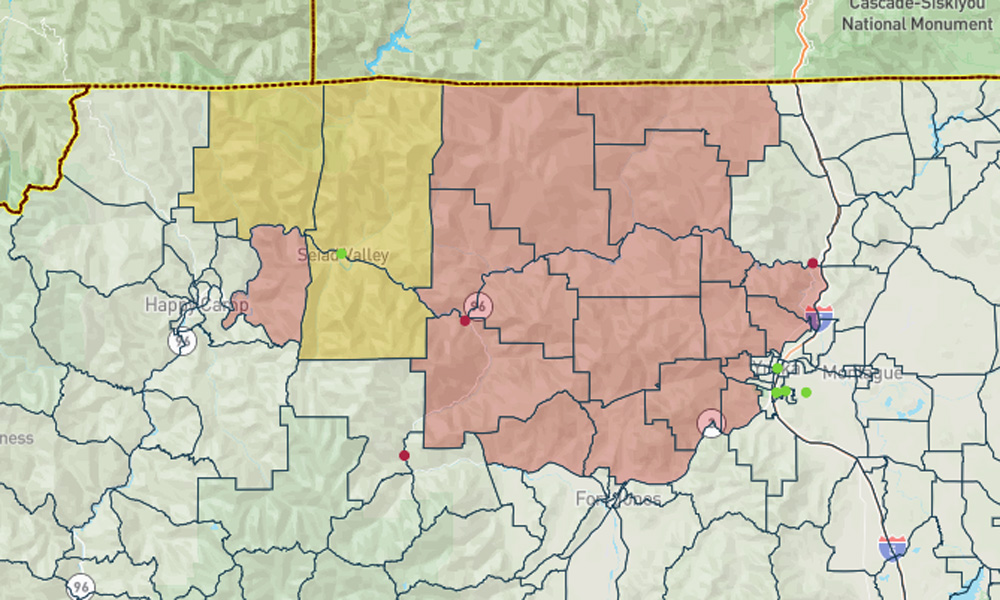 By JULIE WATSON and REBECCA BOONE

SAN DIEGO (AP) — Wildfires in California and Montana exploded in size overnight amid windy, hot conditions and were quickly encroaching on neighborhoods, forcing evacuation orders for over 100 homes Saturday, while an Idaho blaze was spreading.

In California’s Klamath National Forest, the fast-moving McKinney fire, which started Friday, tore across an estimated 47 square miles (122 square kilometers) by Saturday in a largely rural area near the Oregon state line, according to fire officials.

Meanwhile in Montana, the Elmo wildfire doubled in size to more than 6 square miles (about 16 square kilometers) near the town of Elmo and Flathead Lake. Roughly 200 miles (320 kilometers) to the south, Idaho residents remained under evacuation orders as the Moose Fire in the Salmon-Challis National Forest charred more than 67.5 square miles (174.8 square kilometers) in timbered land near the town of Salmon. It was 17% contained.

As fires raged across the West, the U.S. House on Friday approved wide-ranging legislation aimed at helping communities in the region cope with increasingly severe wildfires and drought — fueled by climate change — that have caused billions of dollars in damage to homes and businesses in recent years.

High temperatures, excessive wind and low humidity levels along with a significant build-up of vegetation in the region were feeding the McKinney fire, said Tom Stokesberry, a spokesman with the U.S. Forest Service for the region.

“It’s a very dangerous fire — the geography there is steep and rugged, and this particular area hasn’t burned in a while,” he said.

A small fire was also burning nearby, outside the town of Seiad, Stokesberry said. With lightning predicted over the next few days, resources from all over California were being brought in to help fight the region’s fires, he said.

McKinney’s explosive growth forced crews to shift from trying to control the perimeter of the blaze to trying to protect homes and critical infrastructure like water tanks and power lines, and assist in evacuations in California’s northernmost county of Siskiyou.

Deputies and law enforcement were knocking on doors in the county seat of Yreka and the town of Fort Jones to urge residents to get out and safely evacuate their livestock onto trailers. Automated calls were being sent to land phone lines as well because there were areas without cell phone service.

Over 100 homes were ordered evacuated and authorities were warning people to be on high alert. Smoke from the fire caused the closure of portions of Highway 96.

“We’re asking residents all over the area to be ready,” Siskiyou County Sheriff’s Office spokesperson Courtney Kreider said. “Last night we were pushing out evacuations about every hour, and there are large portions of the county that are in warning areas.”

Moments later, she said, “Oh — we just added another zone to the evacuation warning.”

The Pacific Coast Trail Association urged hikers in western Siskiyou County to get to the nearest town and alerted them that the U.S. Forest Service had closed a 110-mile (177-kilometer) section of the Pacific Crest Trail from the Etna Summit to the Mt. Ashland Campground in southern Oregon.

In western Montana, the wind-driven Elmo fire forced evacuations of homes and livestock as it raced across grass and timber, according to The National Interagency Fire Center, based in Idaho. The agency estimated it would take nearly a month to contain the blaze.

Smoke shut down a portion of Highway 28 between Hot Springs and Elmo because of the thick smoke, according to the Montana Department of Transportation.

Crews from several different agencies were fighting the fire on Saturday, including the Confederated Salish and Kootenai Tribes Fire Division. Six helicopters were making drops on the fire, aided by 22 engines on the ground.

The Lake County Sheriff’s Office said Saturday morning that additional homes were in “pre-evacuation” status, and residents were being asked to monitor information from area agencies in case the weather shifts and more evacuations are needed.

In Idaho, more than 930 wildland firefighters and support staff were responding to the Moose fire Saturday.

A red flag warning indicating that the weather could cause extreme fire behavior was in effect for the area, with “dry thunderstorms” — generally causing lightning and wind without rain — expected.

Firefighters were working to protect homes, energy infrastructure and the Highway 93 corridor, a major north-south route.

Meanwhile, crews made significant progress in battling another major blaze in California that forced evacuations of thousands of people near Yosemite National Park earlier this month. The Oak fire was 52% contained by Saturday, according to a Cal Fire incident update.

The legislative measure approved by federal lawmakers Friday combines 49 separate bills and would increase firefighter pay and benefits; boost resiliency and mitigation projects for communities affected by climate change; protect watersheds; and make it easier for wildfire victims to get federal assistance.

The bill now goes to the Senate, where California Democratic Sen. Dianne Feinstein has sponsored a similar measure.