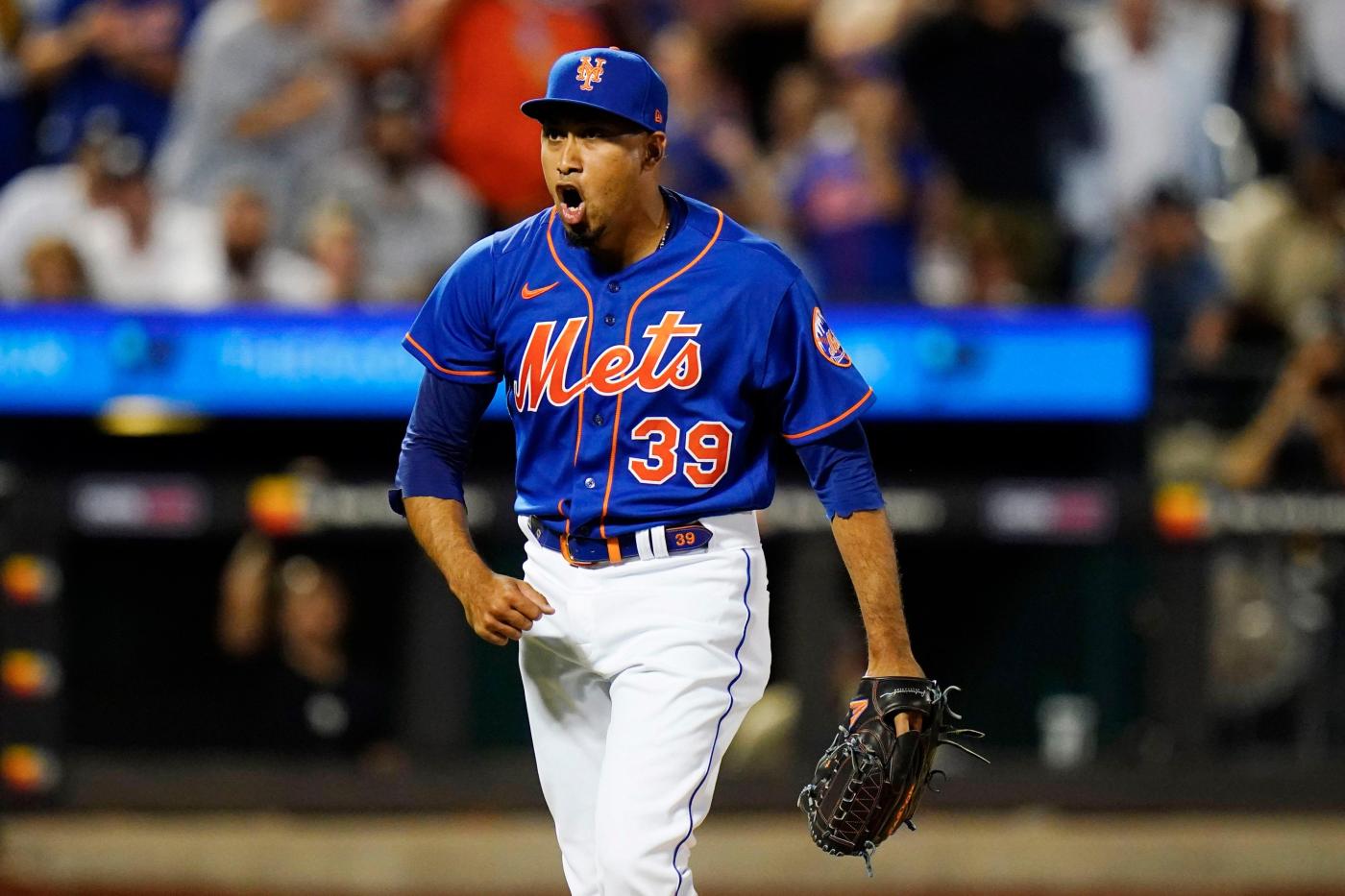 The first game of the 2022 Subway Series hit all the notes one would expect.

Fans of both teams displaying behavior that should probably get them institutionalized? You bet.

“Was that under three [hours?],” Mets manager Buck Showalter joked in his postgame presser.

In the end, the Mets won 6-3. They got a four-out save from Edwin Diaz — who has struck out more than half of the batters he’s faced this year — and an encouraging showing from their starting pitcher.

Taijuan Walker, who figures to be a load-bearing beam in the Mets’ rotation down the stretch, overcame a brutal first inning to turn in a gutty performance. Walker went six innings for his ninth consecutive start, the longest streak of his career.

“After the fourth inning, I was able to settle down and really get in there,” Walker assessed. “In between innings, Max [Scherzer] came up to me and said ‘Just reset.’ That’s what I did.”

His first inning began with a 104 mile per hour comebacker, which he snared on a bounce to throw out DJ LeMahieu. Then Aaron Judge sliced a ball over the right-center field fence to give the guests an early lead, and before the Yankee fan contingent could sit down, Anthony Rizzo followed suit with an opposite field smash of his own.

After that, the only hard contact the Yankees managed off Walker was a grounder from Josh Donaldson and another deep shot by Rizzo, but this one fell gently back to earth and into Brandon Nimmo’s waiting glove. Walker, making his 17th start of the year and first since the All-Star break, allowed seven hits and three earned runs. While nothing from his stat line will appear super impressive, the overall performance was laudable. The Mets’ offense seemed to agree, banding together to make Walker’s early hiccup nothing more than that.

Facing the normally steady Jordan Montgomery, the Mets came back with four runs in their half of the first. Starling Marte matched his opponent in the two-hole with a solo homer of his own, tucking a curling line drive just inside the left field foul pole. Francisco Lindor came up next and blooped a double into right field, then Pete Alonso split the left and center fielders to bring Lindor in. The big exclamation point came from perhaps the most unlikely source, the eternally struggling Eduardo Escobar.

Escobar came into the game as one of three players in Major League Baseball this season to have made at least 350 plate appearances and have a batting average under .220, an on-base percentage below .275 and a slugging percentage of .400 or worse. With a two-run homer to cap the Mets first inning, though, Escobar briefly threw all those stats out. The first episode of the Subway Series needed someone to leave their mark, and it was the Mets’ disappointing third baseman.

“It honestly felt like a World Series home run,” Escobar said through team translator Alan Suriel. “I’ve never played in an environment like that.”

A chaotic start (Walker picked off Kiner-Falefa in the second, Gleyber Torres was hit by a pitch that might have got him in the head if his arm didn’t get in the way, a run scored when Lindor was earholed by a throw to first while trying to beat out a grounder) gave way to a mellow ending.

Neither team scored a run from the fifth inning on. The Yankees were presented a grand opportunity in the seventh, but a bizarre decision to double steal cost them an out when Rizzo was gunned down at second. Sure, Judge made it safely to third on the play. But with reliever Adam Ottavino — who was excellent in his 1.2 innings of work — only needing one more out at that point, Torres’ infield pop up abruptly ended the inning.

“I think the biggest thing for our team is that we don’t care what’s going on earlier in the game or what happened right before,” Escobar said. “We know what we’re capable of doing and we go out there and play hard every single day. That’s the most important thing for us.”

The Yankees are now 5-9 in their last 14 and searching for answers. With the trade deadline looming, this once impenetrable team is starting to fray a bit. In the long run, they will most likely be fine, and will still glide into the postseason. But Josh Donaldson is inviting questions about the efficacy of playing him every day in the playoffs, and while the Yankees have downplayed it the whole way, Giancarlo Stanton’s injury is still in the Achilles tendon, a frightening area for any athlete. Add that to the pre-existing questions about their injured bullpen, and the next week becomes even more compelling.