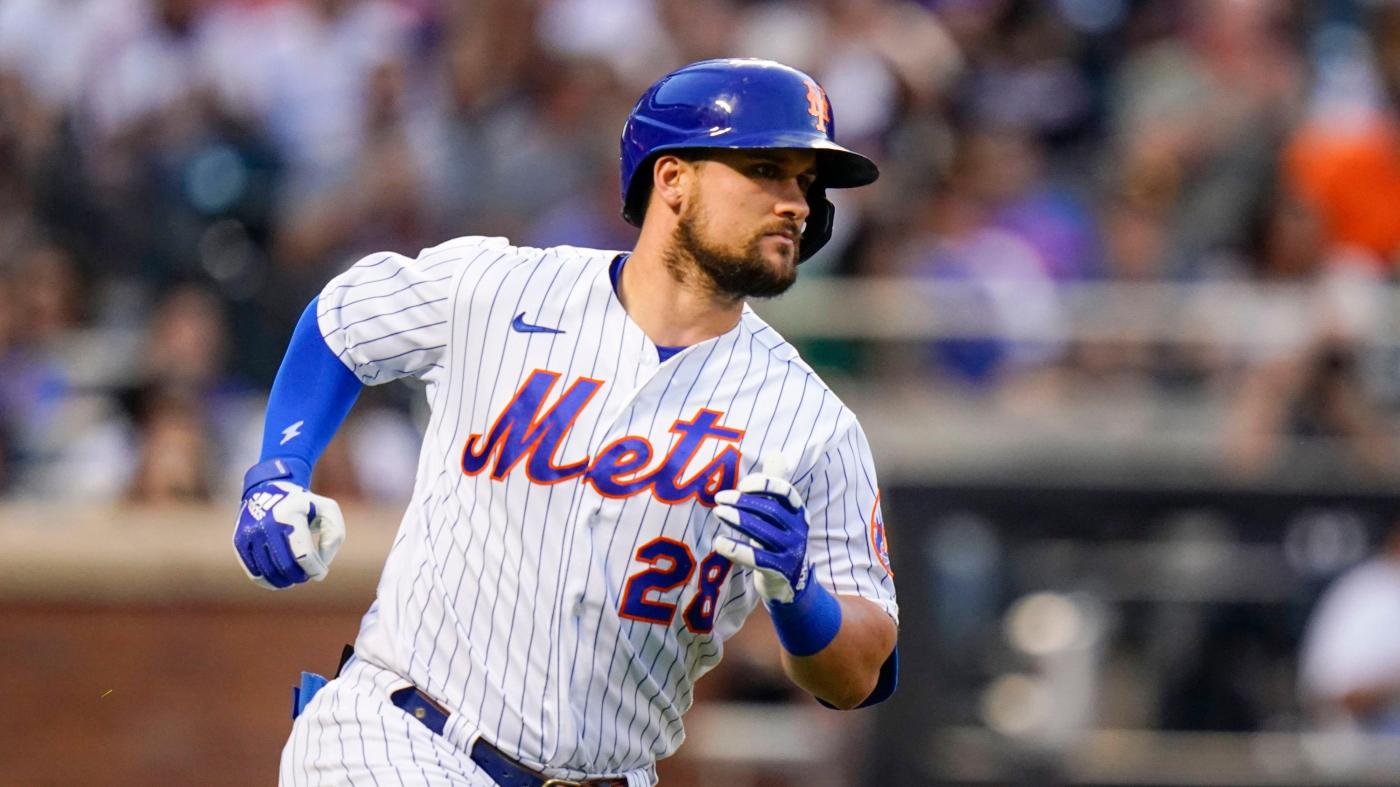 WASHINGTON, D.C. — The endless speculation and theorizing can finally come to an end. On Tuesday, just hours before the trade deadline, the Mets sent third baseman/DH J.D. Davis and three prospects to the San Francisco Giants.

“I’m excited, but I’m also a little upset and sad that I have to say goodbye to some of these guys,” Davis said before being whisked out of Nationals Park on Tuesday evening. “[The Giants] are a very successful organization, they’ve had some bumps in the road [this year], but they’ve got a lot of good guys.”

In return, the Mets receive Darin Ruf, a designated hitter who sometimes moonlights as a corner outfielder or first baseman. The Mets expect him to join the team on Wednesday in Washington. Ruf, 36, is hitting .216/.328/.373 (.701 OPS) for San Francisco this season. More relevant for the Mets, though, he has an .886 OPS against lefties. With him handling DH duties against lefties and Daniel Vogelbach getting the starts against righties, the Mets are essentially trying to create one above-average DH out of two players.

“It’s good for everybody,” Mets’ manager Buck Showalter expressed. “They got a good player and we got a good player. It’s one of those things that I think will work out for both clubs. J.D. has been a good teammate and done some good things for us.”

“It’s a little unfortunate,” Davis, who is from Elk Grove, CA, said of leaving a Mets team that’s playing so well. “But selfishly, a little bit, I’m excited for the opportunity to play over there, especially since it’s so close to home.”

The players going to San Francisco are Thomas Szapucki and High-A pitchers Nick Zwack and Carson Seymour. Neither Zwack nor Seymour are considered top 30 prospects in the team’s system according to MLB.com, though FanGraphs’ rankings has Zwack in the 17th spot. Szapucki, who appeared in one MLB game for the Mets in 2021 and another in 2022, had a 3.38 ERA in 64 Triple-A innings this year, striking out 12.23 hitters per nine innings.

With Davis now officially out of the picture, the Mets are moving on from both a long-discussed trade chip and a perennially underperforming hitter. He heads to San Francisco with 10 extra base hits in his last 154 plate appearances. Davis spoke about how difficult it was to find his footing at times given that he only got regular at-bats when the other team had a left-hander on the mound.

“Having a good game, then not playing, that was part of the system here,” Davis said. “That platoon system. In the beginning of the year, that was part of the system. Buck said, ‘Put your ego to the side.’ This team was on a mission to win a championship. When you don’t play every day, especially with how good this league is nowadays, it’s really hard to get your rhythm going. You have a four-hit game or hit a home run, then you’re not in the lineup the next day or the next three days. It’s definitely difficult to get things going. At the same time, I try to do my best to just be a good teammate and help out other guys.”

“I think everybody is happy for him,” Showalter said. “But we’re also excited about Darin’s addition.”

After hitting .285 in an injury-plagued 2021 season— he was hit by a pitch in the hand, which he says created “lingering pain” —Davis hit .238 for the Mets in 2022 with -0.1 Wins Above Replacement and never quite figured out same-handed pitchers, striking out 31.6% of the time he faced them. Combined with his subpar defense at third base, the Mets finally decided it was time to move on for good.

Conversely, Showalter sees Ruf as someone who can spell Pete Alonso at first base when the MVP candidate needs a day off or just a day without playing the field.

“Every time you have your name in trade rumors you get a little bit of a roller coaster rush where you don’t know what’s going to happen,” Davis said. “This time around, I wasn’t too nervous or anxious about it. If it happened, it happened.”

It happened, and now Davis will suit up for the team he and his family used to despise.

“My parents, growing up, were Dodger fans,” Davis sheepishly revealed. “I don’t know if I’m allowed to say that.”

Showalter was asked which thing he’s more excited about: watching Jacob deGrom pitch or not having to answer any more questions about when he will pitch.

MAY BACK ON WEDNESDAY

The Mets will get a healthy Trevor May back on Wednesday. The right-handed reliever has not pitched for the Mets since May 2 due to a stress reaction in his arm.

“I’m not going to say it’s any given,” Showalter said of May being an immediate difference maker. “I think some of his inconsistencies early on were due to this [injury]. We hope we’ve got that solved.”