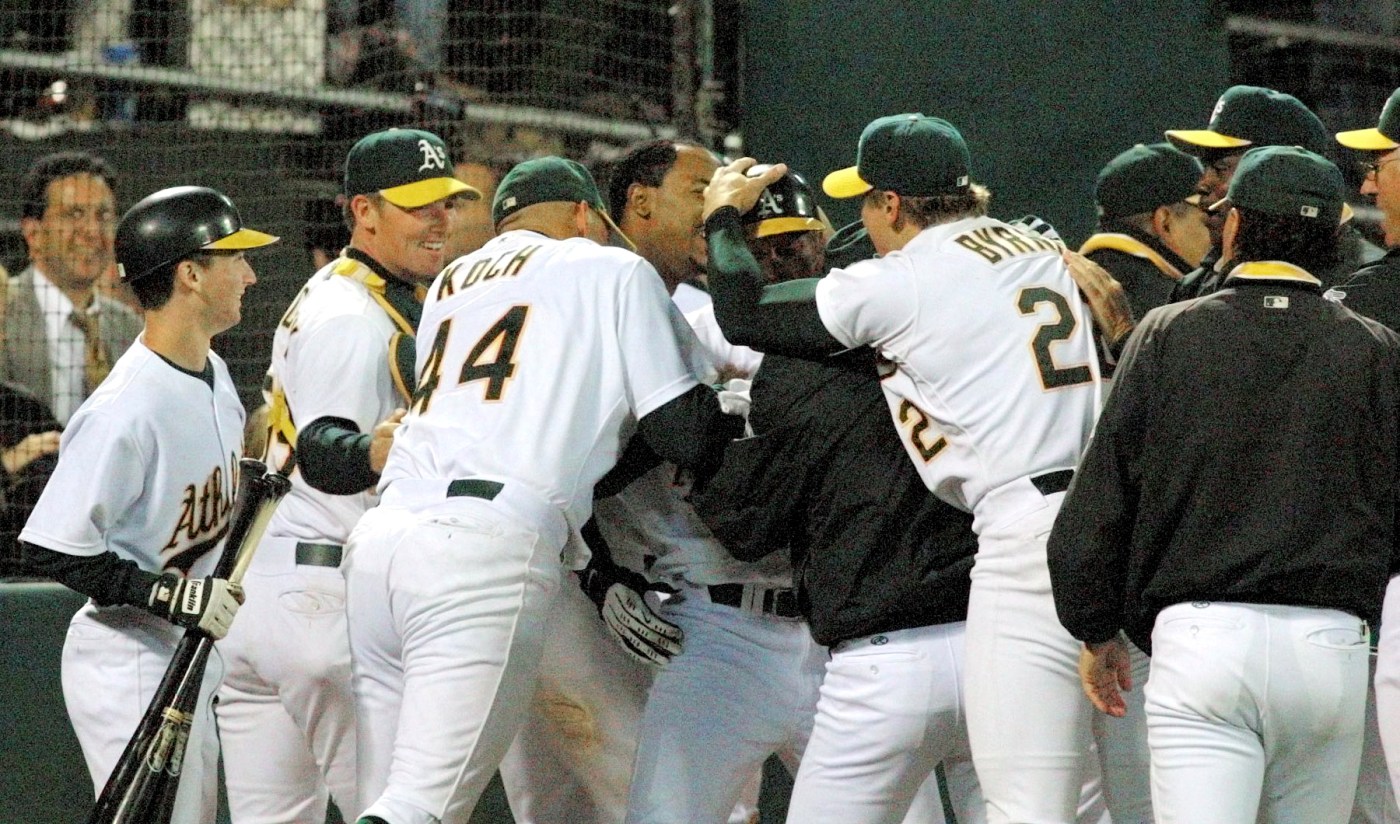 The Oakland A’s unveiled their plans for the 20th-anniversary celebration of the 2002 team that won a then-American League record 20 consecutive games and later captured the AL West title.

More than a dozen players from the 2002 team, plus then-manager Art Howe and members of his staff will be in attendance at the Coliseum for Sunday’s event, which begins at 10 a.m. with a Q and A session with season ticket holders.

The on-field ceremony will begin at approximately 12:15 p.m., roughly an hour before the start of the A’s game with the New York Yankees.

Howe and Scott Hatteberg, who on Sept. 4, 2002, hit the walk-off home run against the Kansas City Royals for the A’s 20th consecutive win, will address the crowd, a “20” banner will be dropped from Mt. Davis, and Miguel Tejada will throw the ceremonial first pitch to Hatteberg.

Attending on the behalf of Cory Lidle, who died on Oct. 11, 2006, in a plane crash in New York, is his wife Melanie and their son Christopher. Lidle was a member of the Yankees at the time of the tragedy.

The A’s 20-game win streak in 2002 began on Aug. 13 of that year with a 5-4 home win over the Toronto Blue Jays. The A’s then beat Toronto again the next day, then swept a three-game series with the Chicago White Sox to close out a homestand.

Then, on a 10-0 road trip, Oakland swept a four-game series with Cleveland and took three from both Detroit and Kansas City.

The A’s returned home to sweep a three-game series with Minnesota, capped by Tejada’s walk-off three-run homer off Eddie Guardado in the ninth inning for a 7-5 Oakland win.

The next day, in the first game of their series with Kansas City, Tejada did it again, singling to center field in the bottom of the ninth to score Greg Myers and gave the A’s a 7-6 walk-off win. The A’s 19th straight victory matched the AL record shared by the 1947 Yankees and the 1906 White Sox.

Cleveland established a new AL record with 22 straight wins in 2017.

BOLT TO IL: Prior to their game with the Yankees on Friday, the A’s placed outfielder Skye Bolt on the 10-day injured list with a right knee patella subluxation.

Bolt was hit by a Greg Weissert pitch in the bottom of the seventh inning and then threw his bat down in frustration. He remained in the game for the time being but was replaced by Cal Stevenson for the top of the eighth inning.