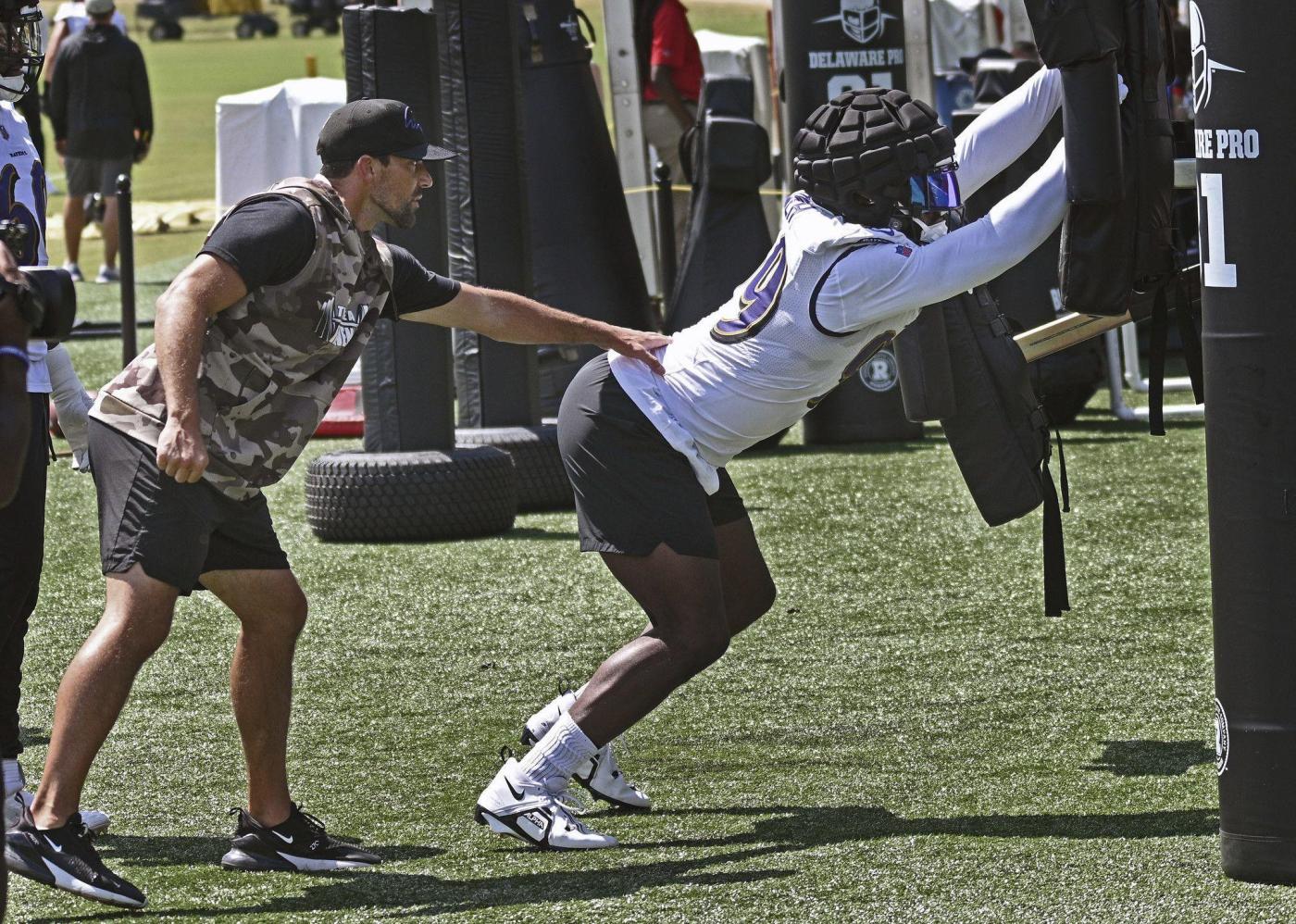 The Ravens could be without rookie outside linebacker David Ojabo for at least the first half of the season as he recovers from a torn Achilles tendon, but second-year player Odafe Oweh seems prepared to pick up the slack.

Oweh, an outside linebacker and first-round selection out of Penn State in 2021, finished last season with five sacks and 33 tackles while playing in 15 games, including two starts.

He spent most of last season trying to figure out the NFL and, most importantly, develop more pass-rushing moves than relying on his sheer speed on the outside.

Through more than three weeks of practice, Oweh has had an impressive training camp. The offseason work on his speed, hand usage and leverage has been noticeable.

This could be his breakout season as Ojabo, a second-round pick from Michigan, heals.

“You’re constantly building, and the answer is again, just reading his keys, trusting what he is looking at and hitting it over and over again so he can play fast,” Ravens outside linebackers coach Rob Leonard said. “Trust his instincts. I talk with Odafe a lot about matching his upper body violence with the violence of his legs.

“He had God-given ability to run, and he can take off. So, working his hands, and all those types of things is a big part of his progression.”

Quarterback Lamar Jackson and kicker Justin Tucker routinely do such freakish things in practice that it’s become the norm.

On one play Tuesday, Jackson rolled to his right, stutter-stepped a defender, changed direction and rolled back to his left. He then threw across his body to the other side of the field for a 20-yard touchdown strike to tight end Mark Andrews.

Minutes later, Tucker kicked a 62-yard field goal that hit the crossbar and fell short. On the next attempt, he made it with about 5-to-10 yards to spare.

Just another day at the office.

I’ve been to most of the team’s training camp practices and Tuesday was the first time I saw a player — second-year outside linebacker Daelin Hayes — beat guard-tackle Tyre Phillips in a one-on-one pass protection drill.

Phillips has been outstanding, but so was center Trystan Colon on Tuesday as he filled in for injured rookie starter Tyler Linderbaum. He’s not going to supplant the first-round pick out of Iowa, but at least the Ravens have versatility and depth up front.

And so is the D-line

Speaking of depth, the defensive line might have the most after the secondary.

The Ravens will start Michael Pierce at nose tackle flanked by Calais Campbell and Justin Madubuike. Rookie Travis Jones will push Pierce for playing time, and Broderick Washington, Isaiah Mack, Brent Urban and Aaron Crawford will be a part of the rotation.

I’ve been keeping an eye on rookie receiver Shemar Bridges, especially after the strong game he turned in Thursday night against the Tennessee Titans (four catches for 62 yards, one touchdown).

He gets better every day at running routes, especially with one-on-one attention from the assistant coaches, but he still has to keep working on his hand placement and extending his arms while catching the ball.

That T-Rex approach won’t work in the NFL. He’ll see quite a few pass attempts get into his body and bounce off his pads.

As for second-year receiver Rashod Bateman, he dropped more passes than Bridges on Tuesday.

I keep reading all these stories about how the Pittsburgh Steelers might finish last in the AFC North because quarterback Ben Roethlisberger retired at the end of last season.

That might be true if the Steelers didn’t have coach Mike Tomlin. He is one of the most competitive and feared coaches in the NFL with a career record of 162-94-2 (.632).

He is like Belichick. Every time you write his teams off, they find a way to win and stay in contention.

It makes no sense for the Jets to put a second-year quarterback out there after having recent knee surgery. It’s not worth the risk.

Will we see the Flacco of old or an old Flacco? He’s 37 years old, so you know the answer, but Flacco will welcome the challenge.

The Ravens released quarterback Brett Hundley and placed outside linebacker Trent Harris on injured reserve ahead of the NFL’s 4 p.m. deadline Tuesday for 85-man rosters.

Harris was signed Saturday but had to be helped off the field Monday with an apparent injury.

“Let’s leave that for a couple more days,” he said.

Rookie offensive tackle Daniel Faalele left the field Tuesday under his own power about 75 minutes into practice and did not return. It’s unclear what might’ve caused the fourth-round pick’s departure. Harbaugh, who did not speak Tuesday, is scheduled to address reporters after practice Wednesday.