Netflix has reached a deal to end its legal dispute with Georgian chess champion Nona Gaprindashvili, who said she was defamed in an episode of Queen’s Gambit.

The two sides informed the court on Monday that they had reached a deal in the case over the Emmy-winning series, based on a 1983 novel by the same name.

Queen’s Gambit tells the story of orphan Beth Harmon (portrayed by Anya Taylor-Joy in the show) who rose to the top of the chess world in the 1960s, defeating Russia’s best players at a renowned chess tournament.

Gaprindashvili, 80, took specific issue with a moment in the show in which a commentator references her, saying she ‘never faced men’ – and filed a $5 million defamation lawsuit against the streaming giant.

Speaking about the character Harmon, the commentator says: ‘The only unusual thing about her, really, is her sex. And even that’s not unique in Russia. There’s Nona Gaprindashvili, but she’s the female world champion and has never faced men.’

The chess legend argued in the lawsuit that by the year the episode is set, 1968, she had already competed against 59 men – beating 28 of them simultaneously. 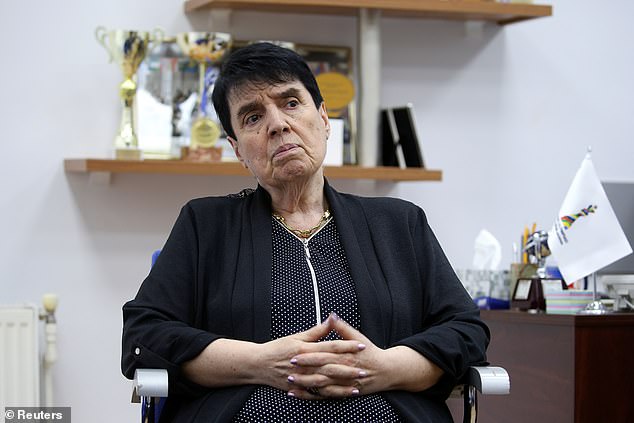 Nona Gaprindashvili, 80, will be allowed to sue Netflix for defamation after the show falsely claimed the chess champion was Russian and had never competed against men

Gaprindashvili had competed against ‘at least ten Grandmasters of that time, including Dragolyub Velimirovich, Svetozar Gligoric, Paul Keres, Bojan Kurajica, Boris Spassky, Viswanathan Anand and Mikhail Tal. The last three were also world champions during their careers,’ the lawsuit states.

The suit also contends that Taylor’s character is an Americanized and fictionalized version of the real-life female Georgian prodigy. It also points out that the show referred to her as being from Russia, instead of Georgia.

‘Netflix brazenly and deliberately lied about Gaprindashvili’s achievements for the cheap and cynical purpose of “heightening the drama” by making it appear that its fictional hero had managed to do what no other woman, including Gaprindashvili, had done,’ the 25-pages long lawsuit said.

‘Thus, in a story that was supposed to inspire women by showing a young woman competing with men at the highest levels of world chess, Netflix humiliated the one real woman trail blazer who had actually faced and defeated men on the world stage in the same era.’

Gaprindashvili claims she contacted Netflix after the show was released and noted that ‘multiple news outlets and various individual internet users commented on the inaccuracy of the line.’

She said she asked for a retraction and apology, but was dismissed by the company and her complaint was called ‘innocuous.’ 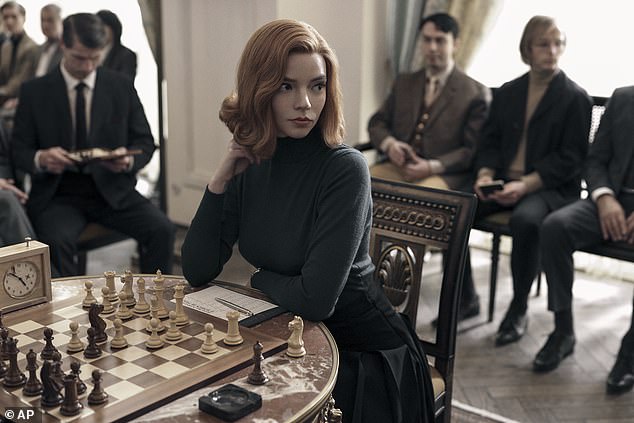 Gaprindashvili claims Beth Harmon, a fictional character from The Queen’s Gambit, (pictured) is an Americanized and fictionalized version of her

Gaprindashvili’s lawyers claimed the mistake had been streamed to ‘millions of viewers worldwide’ and ‘tarnished (her) personal and professional reputation’.

Netflix had argued that ‘no reasonable viewer would have understood the line to convey a statement of fact’ as the series was presented as ‘an entirely fictional work,’ according to legal documents obtained by the Press Association.

The company also tried to argue that its viewers would need ‘knowledge of competitive Soviet chess in the 1960s’ to grasp the alleged defamatory remark, the documents said. However, a California Central District Court denied a motion to dismiss a US defamation lawsuit.

In January, the judge ruled that the streaming giant can be sued for defamation citing that ‘the fact that the series was a fictional work does not insulate Netflix from liability for defamation if all the elements of defamation are otherwise present,’ legal documents said.

The judge also noted that there had been no evidence of any cases ‘precluding defamation claims for the portrayal of real persons in otherwise fictional works.’

Netflix appealed against the ruling to the 9th U.S. Circuit Court of Appeals. Before it was settled, the court had agreed to review the case.

Alexander Rufus-Isaacs, a representative of Gaprindashvili, told The Hollywood Reporter that he was ‘pleased that the matter has been resolved’.

The Queen’s Gambit became one of Netflix’s most popular shows and set a record for the most viewers ever for a scripted limited-run series in the first 28 days after it premiered on October 23, 2020.

It went on to win 11 Emmys last year, including one to Anya Taylor-Joy for Outstanding Lead Actress in a Limited or Anthology Series or Movie.

The show follows a fictional character named Beth Harmon, played by Taylor-Joy, a child prodigy who grows up in a Kentucky orphanage in the 1950s and goes on to become a chess legend.

The character, based on a 1983 novel, beats even the most impressive Russian players of the time.

Gaprindashvili, from the former Soviet Republic of Georgia, is a pioneer of women’s chess and the first woman to be earn the title of International Chess Grandmaster.

Throughout her career, she won many championships and beat some of the best male chess players in the world. 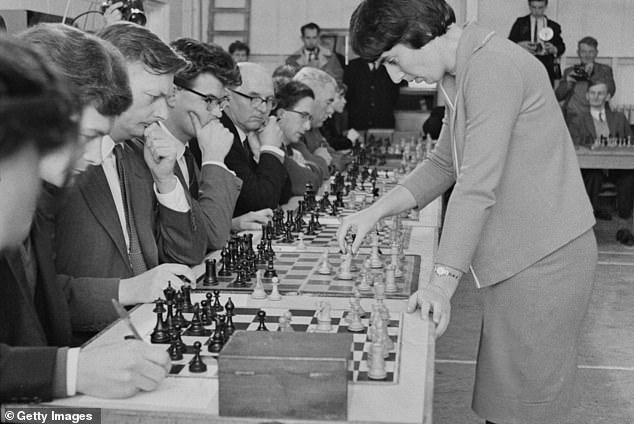 Gaprindashvili is a Soviet pioneer of women’s chess from Georgia and the first woman to earn the title of International Chess Grandmaster  (Pictured: Nona Gaprindashvili playing against 28 men at once in Dorset, UK, January 1965) 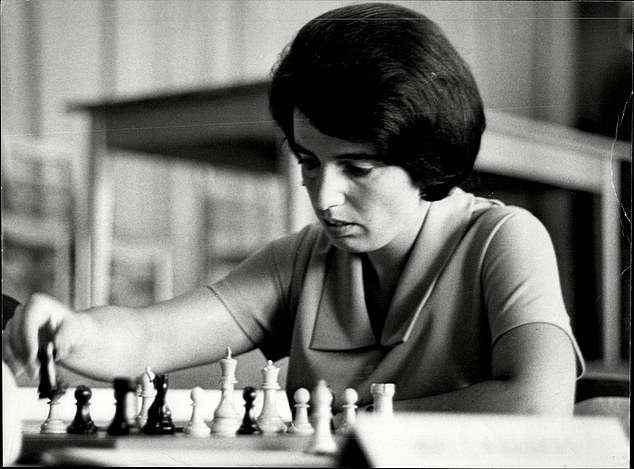 The international chess star has won many championships and beat some of the best male chess players in the world (Pictured: Nona Gaprindashvili competing in the Ladies International Chess Tournament in Romford, Essex) 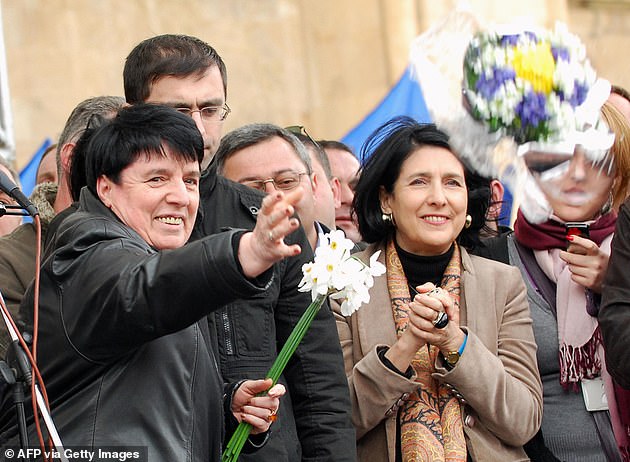 She started playing chess at the age of 13, much like Taylor-Joy’s character, and at age 20, became the female World Champion. Gaprindashvili won 25 medals, including eleven team goal medals and nine individual gold medals.

The lawsuit claims: ‘She encountered severe prejudice because she was a woman —and often the only woman — competing amongst men.’

Gaprindashvili’s ‘life-long career is in the world of competitive chess, in which she remains an active leader, role-model, and competitor and contends that the line cuts to the heart of her hard-won standing in her profession.’

The international icon, who lives in the Georgian capital of Tbilisi, still plays chess and has won several senior world championships.

‘The professional reputation and brand of Gaprindashvili was inextricably bound up with her courageous efforts to face and defeat estimable male opponents when chess was overwhelmingly a man’s world.’