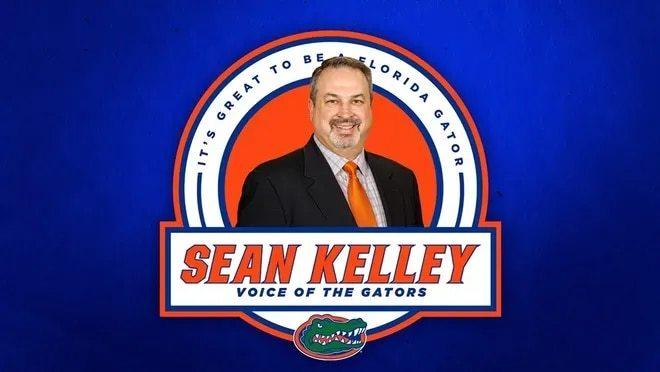 Which is why college football radio play-by-play broadcasters rarely leave their jobs.

It’s why Gene Deckerhoff just retired at Florida State after nearly 50 years at the school. It’s why Mick Hubert just hung up his microphone after 33 years at the University of Florida. It’s why Marc Daniels has been calling games at UCF for 28 years and Joe Zagacki has been doing Miami Hurricanes football play-by-play for 25 years.

And it’s why Sean Kelley just left a prestigious gig as a national broadcaster for ESPN Radio to replace Hubert as only the fourth radio voice at UF in the last 81 years.

Kelley, who starts at UF on Aug. 1, took time out a few days ago to talk with me about the allure of the Gators radio job, his prior life as a firefighter, once doing radio play-by-play of Santa Claus scoring a touchdown and a variety of other topics.

Here are some excerpts from our conversation:

MB: You’ve done a lot in your career — Tulane football, former NBA play-by-play broadcaster for the New Orleans Pelicans, national NBA games, Major League Baseball games and the last three years as the lead play-by-play voice for college football on ESPN Radio. Why was the Florida job appealing to you?

SK: “First of all, the University of Florida is an elite program and a destination job for anyone in the radio business. Also, it was the idea of getting back to my roots and being a part of a team. Not just being a radio voice for the program but an ambassador of the university and becoming part of the fabric in a community like Gainesville. That’s the sort of thing that inspired me get into the business growing up in St. Louis where Jack Buck was the voice of the Cardinals and Dan Kelly was the voice of the St. Louis Blues.

“I love doing the national stuff, but when you’re part of a team it’s just different. When you’re part of a team and things don’t go well, everybody on the bus is mad, the food doesn’t taste as good and you think about the game all night. When you’re doing national games, you just take off your headset and say, ‘Well, we’ll see you next time.’ You’re not invested. I missed being invested. I like wearing team colors. You still want to be somewhat objective, but having a broadcast that’s really slanted toward a team, a school and a fan base — that’s what I’ve enjoyed for most of my career.”

MB: The Gators have had only three radio voices in the last 80-plus years (Otis Boggs for 40 years. David Steele for 8 years and Mick Hubert for 33 years). What does that say about the job?

SK: (Laughing) “To be humorous for a moment, it says that if I don’t screw this up, I might have a job for a long time. Seriously, though, it’s really humbling and an honor to be part of that legacy of broadcasters. We’re talking about Hall-of-Famers and gentlemen who have been tied to generations of Gator fans. I hope in 20 years I have somebody come up to me and say, ‘When I was a kid growing up, I listened to you on the radio and you’re one of the reasons I became the Gator fan I am today.’ That would bring much joy to my heart.”

SK: “We were coming out of a commercial timeout when I saw something out of the corner of my eye and I decided to channel my inner Kevin Harlan and do play-by-play of Santa on the field. I normally don’t highlight or talk about anybody who is rude or stupid enough to run onto a playing surface from the stands, but I couldn’t help myself.”

MB: Did Santa get hauled off the jail after that?

SK: “Yes, I think Santa spent the night in the pokey with his fellow elves.”

MB: So tell me about your five or six years as a firefighter.

SK: “It was an interesting time in my career. I was doing the NBA [in New Orleans] at the time and I had chunks of my schedule during the offseason where I couldn’t sit still. I’d always had an interest in being a firefighter so I started off being a volunteer and then it evolved into being a paid firefighter. It satisfied some of my needs as far as stimulating me in a new way and allowing me to be part of the community in a unique way. I miss the fire service in some ways, but there were things I saw and went through that I would never want to go through again. It was a cool, unique hybrid career experience and, as far as I know, I’m the only broadcaster/firefighter in the radio industry.”

MB: How has being a radio play-by-play broadcaster changed in today’s world with fans now being able to watch almost every game on TV?

SK: “It’s certainly evolved in a lot of ways, but I still think there’s something romantic about listening to a game on the radio with the broadcaster sharing the game and audibly painting a picture for the fan who isn’t in the stadium. I don’t think that goes away, especially in the SEC. But I also believe that being the ‘Voice of the Gators’ has to be different than just being the radio announcer. I have a 22–year-old son and his generation is not consuming games on the radio or sometimes not even on television. They’re consuming it on their cell phone or computer. So, yes, I want to be the ‘Voice of the Gators’ in the traditional sense by broadcasting games on the radio, but I also need to be the ‘Voice of the Gators’ to the younger demographic that’s not consuming the game in the romantic, traditional way. It’s my job to be a Swiss army knife and tell the story of the Gators in a variety of ways — on the radio, on social media and on other digital platforms.”

MB: The first national college football game you did on ESPN Radio was the Florida-Miami game in Orlando three years ago in late August. What do you remember from that game?

SK: “I just remember how sweltering hot it was at Camping World Stadium that night. It was so hot and humid that I can still feel my clothes sticking to my skin.”