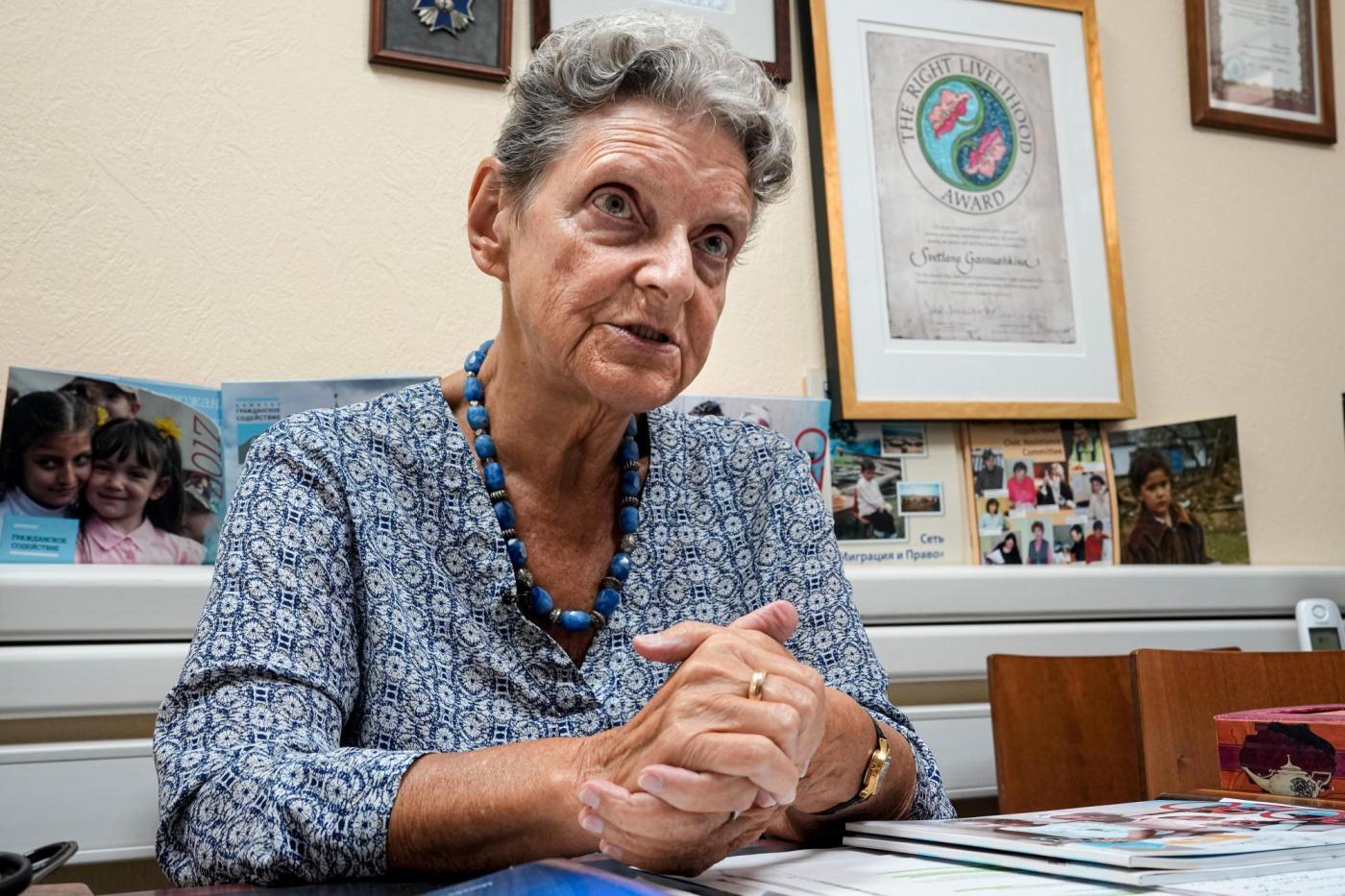 “Through their consistent efforts in favor of human values and anti-militarism and principles of law, this year’s laureates have revitalized and honored Alfred Nobel’s vision of peace and fraternity between nations, a vision most needed in the world today,” she told reporters in Oslo.

Bialiatski was one of the leaders of the democracy movement in Belarus in the mid 1980s and has continued to campaign for human rights and civil liberties in the authoritarian country. He founded the non-governmental organization Human Rights Center Viasna and won the Right Livelihood Award, sometimes referred to as the “Alternative Nobel,” in 2020.

Bialiatski was detained following protests that year against the re-election of Belarus’ President Alexander Lukashenko, a close ally of Putin. He remains in jail without trial.

Despite tremendous personal hardship, Mr Bialiatski has not yielded one inch in his fight for human rights and democracy in Belarus,” Reiss-Andersen said, adding that the Nobel panel was calling on Belarusian authorities to release him.

She said the Nobel Committee was aware of the possibility that by awarding him the prize Bialiatski might face additional scrutiny from authorities in Belarus.

“But we also have the point of view that the individuals behind these organizations, they have chosen to take a risk and pay a high price and show courage to fight for what they believe in,” she said. “We do pray that this price will not affect him negatively, but we hope it might boost his morale.

Belarus exiled opposition leader Sviatlana Tsikhanouskaya, visiting Paris, told The Associated Press that the award would further increase the spotlight on Belarusian political prisoners and said she felt “honored and delighted” that Bialiatski was among the laureates, calling him a “famous human rights defender in Belarus and in the world” and a “wonderful person.”

“For sure, it will attract more attention to (the) humanitarian situation in our country,” she said of the award.

Tsikhanouskaya, whose husband is also imprisoned, said Bialiatski “is suffering a lot in punishment cells” in prison in Belarus.

“But there are thousands of other people who are detained because of their political views, and I hope that it will raise awareness about our country and practical steps will have been done in order to release those people who sacrificed with their freedom,” she told the AP.

Memorial was founded in the Soviet Union in 1987 to ensure the victims of communist repression would be remembered. It has continued to compile information on human rights abuses in Russia and tracked the fate of political prisoners in the country.

“The organization has also been standing at the forefront of efforts to combat militarism and promote human rights and government based on the rule of law,” said Reiss-Andersen.

Asked whether the Nobel Committee was intentionally sending a signal to Russian President Vladimir Putin, who turned 70 on Friday, Reiss-Andersen said that “we always give a prize for something and to somebody and not against anyone.”

“This prize is not addressing President Putin, not for his birthday or in any other sense, except that his government, as the government in Belarus, is representing an authoritarian government that is suppressing human rights activists,” she said.

“The attention that Mr. Putin has drawn on himself that is relevant in this context is the way a civil society and human rights advocates are being suppressed,” she added. “And that is what we would like to address with this prize.”

The Center for Civil Liberties was founded in 2007 to promote human rights and democracy in Ukraine during a period of turmoil in the country.

“The center has taken a stand to strengthen Ukrainian civil society and pressure the authorities to make Ukraine a full fledged democracy, to develop Ukraine into a state governed by rule of law,” said Reiss-Andersen.

Following Russia’s invasion of Ukraine in February, the group has worked to document Russian war crimes against Ukrainian civilians.

“The center is playing a pioneering role with a view to holding the guilty parties accountable for their crimes,” said Reiss-Andersen.

A representative of the Center for Civil Liberties, Volodymyr Yavorskyi, said the award was important for the organization, because “for many years we worked in a country that was invisible.”

“This is a surprise for us,” he told The Associated Press. “But human rights activity is the main weapon against the war.”

The award follows a tradition of highlighting groups and activists trying to prevent conflicts, alleviate hardship and protect human rights.

Last year’s winners have faced a tough time since receiving the prize. Journalists Dmitry Muratov of Russia and Maria Ressa of the Philippines have been fighting for the survival of their news organizations, defying government efforts to silence them

They were honored last year for “their efforts to safeguard freedom of expression, which is a precondition for democracy and lasting peace.”

The prize carries a cash award of 10 million Swedish kronor (nearly $900,000) and will be handed out on Dec. 10. The money comes from a bequest left by the prize’s creator, Swedish inventor Alfred Nobel, in 1895.

Follow all AP stories about the Nobel Prizes at https://apnews.com/hub/nobel-prizes