One pass to Ray-Ray McCloud shows why 49ers took him 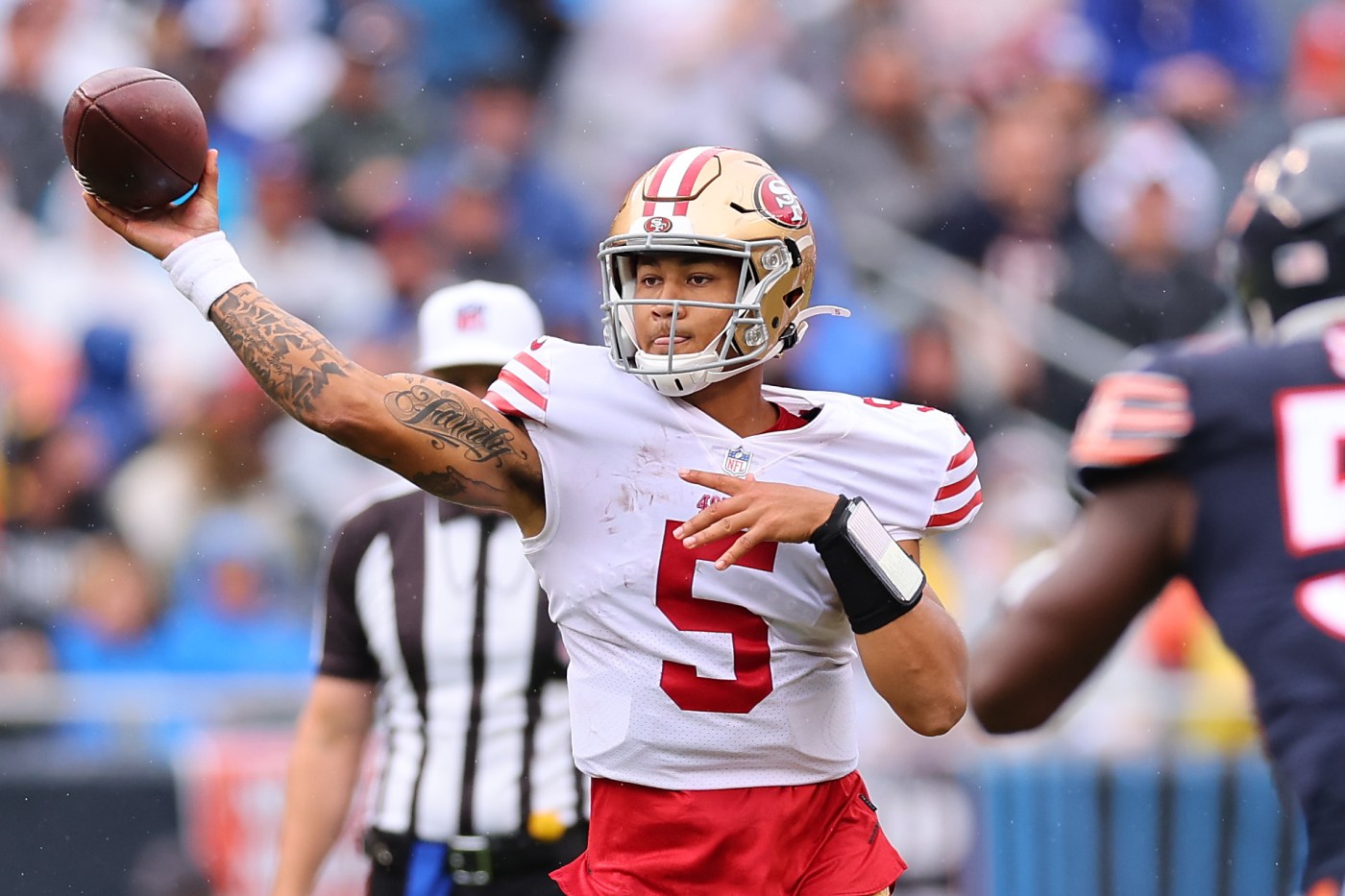 Trey Lance’s season debut, albeit a losing one, showcased one of the most mesmerizing throws by a 49ers quarterback in recent memory.

It was a daring downfield pass through triple coverage, and it exemplified an aspect of why the 49ers ushered out the Jimmy G era.

That 20-yard completion to Ray-Ray McCloud did not make the NFL’s game-day highlight reel, nor it did produce a touchdown, which was the case with Lance’s 27 other passes in that 19-10, rain-soaked defeat at Chicago.

Perhaps what helped make that play stand out on a rainy doomsday were Lance’s struggles on other throws, specifically short and quick passes, the kind that Jimmy Garoppolo excelled at with his quick release and veteran knowledge.

Those passes could be in heavy demand Sunday when rainstorm 2.0 greets the 49ers in their home opener against the Seattle Seahawks. So, another rain game, and another likely without tight end George Kittle, whose groin injury is keeping him out of practice this week.

To better grasp what that second-quarter completion to McCloud, let’s delve into the interpretations and observations from those in the know:

Shanahan was subdued in his praise of Lance’s pass, and that is certainly understandable after a terrible loss. Plus, his young quarterback isn’t in need of an attaboy greeting card.

“It was the exact same pass he threw to (Brandon) Aiyuk the series before, just a high cross and he was open,” Shanahan said Wednesday. “Did a good job hitting him in stride, so …”

Both passes – to Aiyuk and to McCloud – were on target as the receivers approached Soldier Field’s left-side numbers.

But Aiyuk’s closest defender was 5 yards from him. McCloud’s ball arrived only after it safely soared over retreating linebacker Roquan Smith, zipped by the facemask of safety Eddie Jackson, and then hit McCloud well in front of cornerback Jaylon Johnson.

Perhaps Shanahan wanted Lance to throw earlier. In Lance’s self-critique, he wishes he had a quicker trigger.

“Going back and watching the tape, I could have thrown on one hitch instead of two, which would’ve made it look a lot easier,” Lance said Wednesday.

From the Bears’ 46-yard line, Lance took the snap under center and faked a handoff to Elijah Mitchell while Deebo Samuel went in “orbit” motion behind them. Then, after a five-step drop and the help of a Charlie Woerner block, Lance enjoyed a few seconds to set and reset his feet.

Added Lance: “He made a great catch. It’s the same throw I threw to B.A., another high cross on the first drive.”

Lance then remarked about his receivers’ trustworthiness and the consistency of their routes in reaching their landmarks at the right angle.

“It makes it easier for me,” Lance added.

McCloud’s first and only catch in his 49ers debut was that 20-yarder, on second-and-4, to the Bears’ 46-yard line. It was the biggest gain on the 49ers’ lone touchdown drive, which ended five plays later on Deebo Samuel’s 6-yard run.

“It’s something we’ve been practicing – being on time,” McCloud said. “It’s why (route) depth is so important, so the quarterback can put the ball in a place only we can get it, without throwing so hard.”

Lance did not pitch a high fastball to blaze it into that tight window for McCloud.

“It was actually more of a layered ball,” Lance said, “and the ball was a little heavy at that point (from the rainwater), but it wasn’t too bad. Like I said, it was one of those throws that we made that I needed to make more of in the first half.”

Although the NFL tracks various data points, NextGen Stats did not have permission to publicly share statistical details about Lance’s completion to McCloud. The NFL’s Next Gen Stats charted Lance’s targets, including 2-of-6 passing to his left behind the line of scrimmage, and 2-of-7 down the hashmarks over the middle.

ANALYSTS HAVE THEIR SAY

On Fox’s broadcast call of Lance-to-McCloud, Joe Davis noted how Lance threw a “perfect dime” to the “second level.”

Fox analyst Daryl Johnston added: “Boy this is a heck of a throw by Trey Lance. Watch, he’s got to get it over the linebacker. This is what Kyle Shanahan saw. You take that running quarterback style, but then the arm talent to make those type of throws. Now it’s just getting the consistency in the passing game.”

Such consistency was harped on by other longtime analysts.

.@49ers @957thegame be on tomorrow morning talking about this throw and others at 7:30 with Bonta & Shasky. The talent from @treylance09 is evident. He just needs to keep playing and working #BaldysBreakdowns pic.twitter.com/EA6AnlvGD8

“He’s more comfortable with throwing the ball down the field,” NBC Sports’ Chris Simms said on his Unbuttoned podcast. “That’s one thing I’ll say if Shanahan is listening: ball down the field, ball outside the numbers — he looks more comfortable. He’s more consistent throwing those type of throws than the short and intermediate passes, where accuracy and precision are more important.

“There’s less room for error on those,” Simms continued. “People think, ‘Oh, it’s a shorter pass.’ No, it’s usually in a tight hole, a tight window, and the receiver has a little bit of alligator arms, ‘Is he going to put it in the right place?’ ”

Tune in Sunday to the 49ers’ home opener for the next episode of Where The Trey Lance Pass Goes.