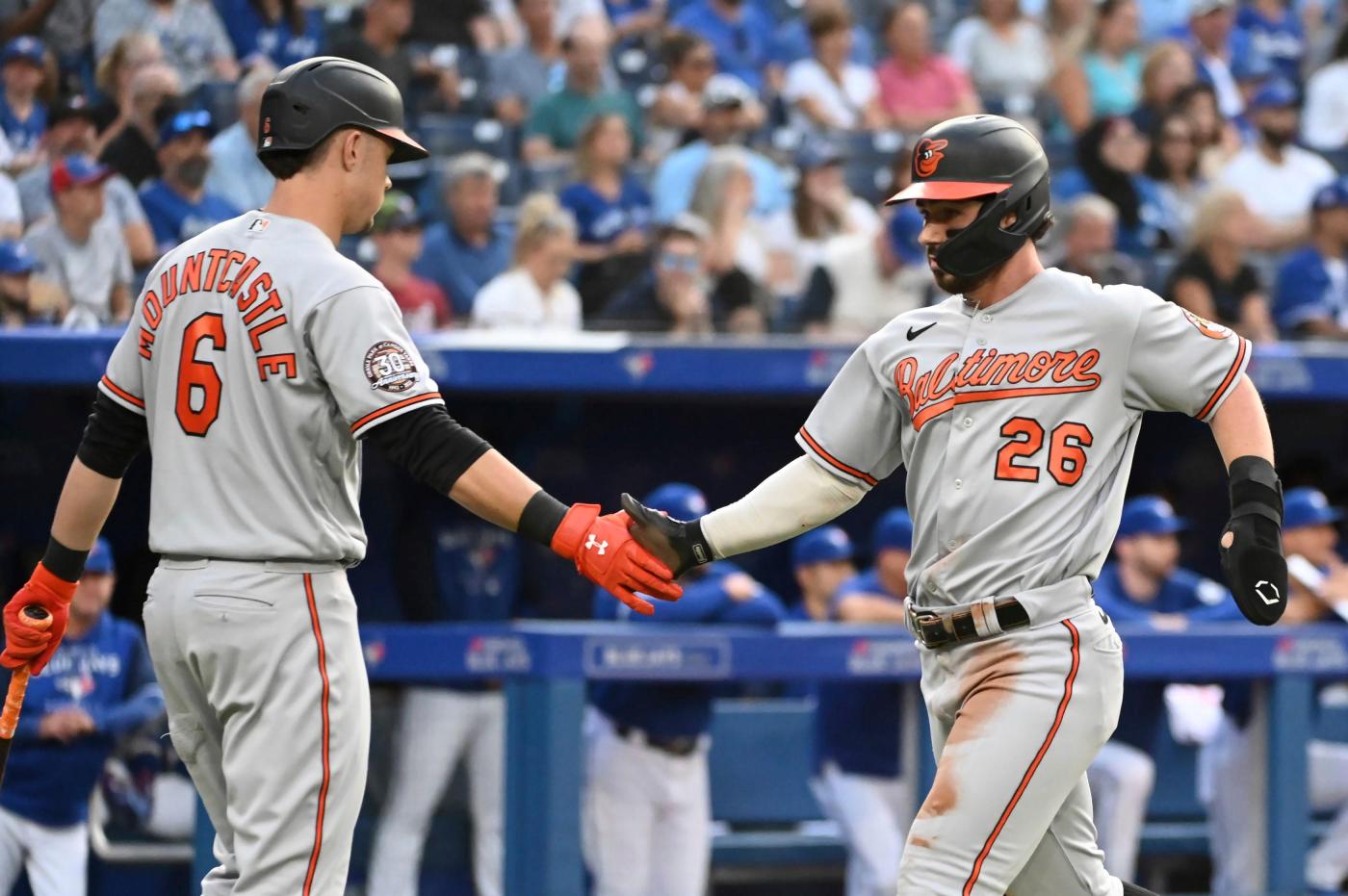 The fate of the Orioles’ season might well come down to how they perform against the Toronto Blue Jays. If the next two months are anything like the past week, they’ll do well in that regard.

Coming off a disappointing series loss to the Tampa Bay Rays in which they nearly went without a baserunner in the series finale, the Orioles’ offense busted out a 7-3 victory to begin a three-game set with the Blue Jays, their third win in eight days against the American League wild-card leaders. Including the final two games of this series, 12 of Baltimore’s final 47 games are against Toronto.

Although the Tampa Bay Rays’ win over the New York Yankees keeps the Orioles (60-55) 1 1/2 games out of a playoff spot, they ended their game Monday trailing by that much for any of the league’s three wild-card spots; the Seattle Mariners didn’t begin their game with the Los Angeles Angels until late Monday.

After going into the ninth without a walk or hit Sunday against the Rays, Baltimore got on the board early. Batting leadoff in place of center fielder Cedric Mullins for the third straight time the Orioles have faced a left-handed starter, Ryan McKenna blooped a double over first baseman Vladimir Guerrero Jr. to open the evening. A batter later, right fielder Anthony Santander, who missed the Orioles’ previous visit to Toronto because he was not vaccinated against COVID-19, grounded a single up the middle to provide a 1-0 lead.

“We had a tough series in Tampa,” manager Brandon Hyde said. “It was a tough last two games there, and there’s a lot of disappointment, and for us to score right away in the first inning, for me, that was big.”

That advantage expanded in the third when first baseman Ryan Mountcastle continued terrorizing Blue Jays pitching with his fifth home run through 26 at-bats against Toronto this season. Mountcastle, who missed Sunday’s game with a bruised left hand and played through swelling Monday, has a 1.164 OPS off Blue Jays pitchers in his career, the highest OPS against a single opponent in Orioles history.

Toronto answered with a pair of runs in the inning’s bottom half off rookie starter Kyle Bradish, though he induced a double play to strand the tying run at third.

With one out in the fourth, speedster Jorge Mateo beat out an offline throw from shortstop Bo Bichette, advanced to second on a nine-pitch walk from Terrin Vavra, then reached third after an errant pickoff attempt from Yusei Kikuchi. With the infield in, Tyler Nevin smacked a grounder to Bichette as Mateo broke for home, but Toronto’s shortstop was once again unable to nab one of the game’s fastest runners. Vavra then came home on a second McKenna double, with Adley Rutschman adding a sacrifice fly in the frame to make it 6-2.

Mountcastle walked to open the fifth, giving him only his second game with multiple walks this season. He eventually scored on a bases-loaded sacrifice fly by Vavra.

With the victory, the Orioles reached the 60-win mark for the first time since 2017.

With Kikuchi knocked from the game in the fifth, the Orioles did not add to their lead. But their bullpen behind Bradish didn’t allow Toronto to rally.

Bradish allowed a home run to Guerrero in the fifth and a pair of singles before being pulled with two outs, marking the first time in four starts off the injured list he didn’t finish five innings. Bryan Baker, who closed for Toronto’s Triple-A team in 2021, stranded Bradish’s two runners then struck out two in the sixth to earn the win.

Dillon Tate worked around a leadoff single in the seventh and combined with Cionel Pérez for a clean eighth. Félix Bautista put two Blue Jays on in the ninth but got Guerrero to hit into a double play to end the game.

With 4 1/3 shutout innings, the Orioles’ bullpen lowered its collective ERA to 3.06, entering the day third in the majors in that measure.

>> Mullins was out of the lineup with the Blue Jays starting Kikuchi. Mullins, who has put up a .568 OPS against lefties this year, has been out of the lineup or dropped from the leadoff spot in five of Baltimore’s past seven matchups with a left-handed starter. Asked whether he has any concerns about Mullins facing left-handers, manager Brandon Hyde said, “Not right now.”