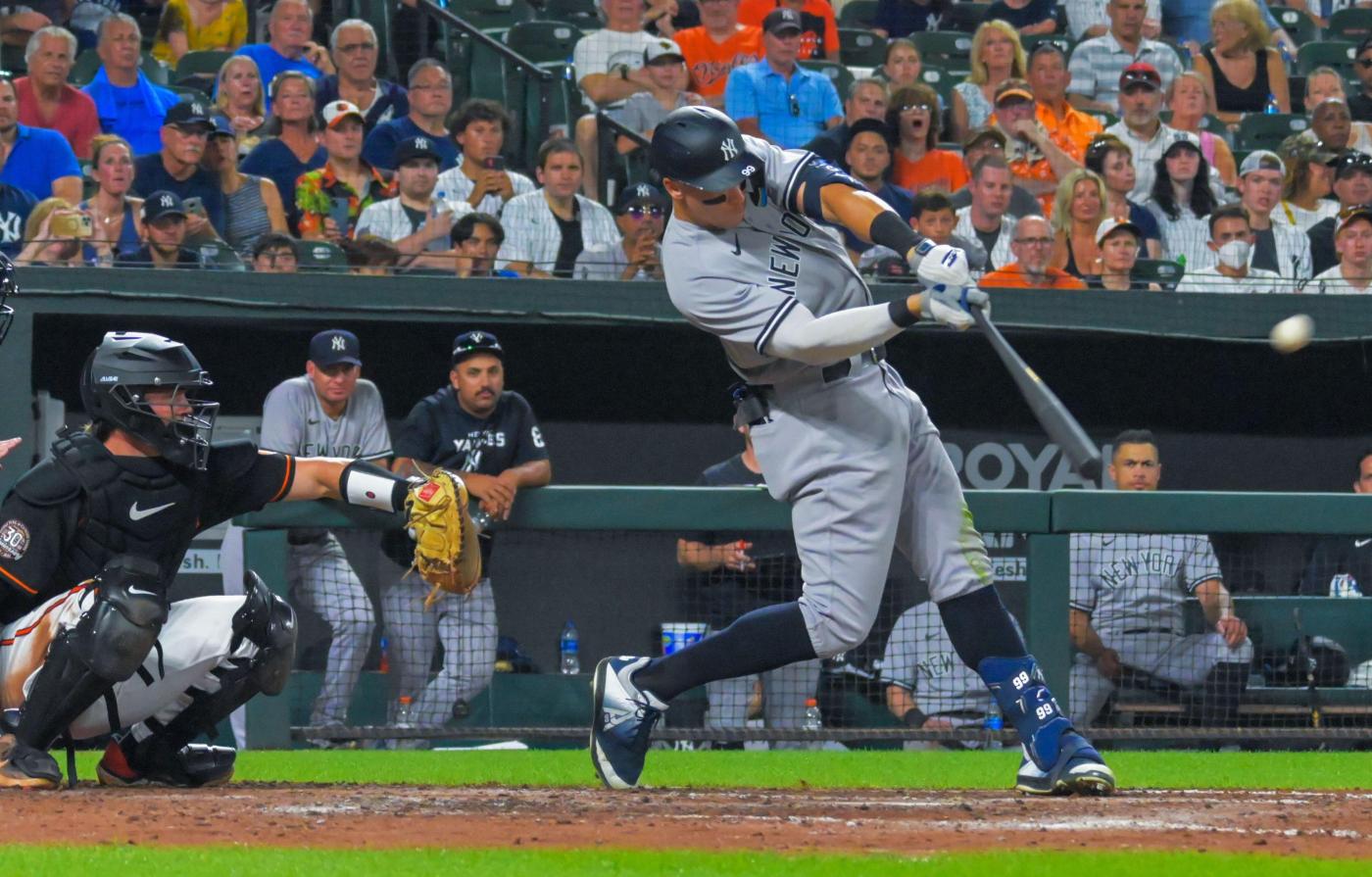 The second ball Aaron Judge smoked to left-center field went even farther than his first, almost clearing the visitor’s bullpen entirely on its way to the statue plaza at Camden Yards before a ricochet sent it back down toward the celebrating New York Yankees relievers.

They were nearly identical swings, the two home runs from Judge off Orioles right-hander Tyler Wells. First came his three-run shot in the third inning, as he jumped on a fastball and sent it 436 feet at 108.6 mph. The second was a solo shot, leaving the Orioles in a hole and pumping up the pro-Yankees crowd.

The second blast, against a changeup left over the strike zone, sailed off Judge’s bat at 113.5 mph and traveled 465 feet, making it the fourth-longest homer at Camden Yards since Statcast began tracking in 2015. And as Judge, Wells and the rest of the announced 28,468 onlookers craned their necks to follow the titanic shot through the night, the Yankees were well on their way to a 7-6 victory to open the second half of the season.

It wasn’t routine, however, not with the three-run homer from Anthony Santander in the seventh. The leisurely trot around the bases for Santander following his 16th homer of the season showed that while the first half of the season ended, the never-quit mentality that carried Baltimore through it remained.

But it wasn’t enough. The loss starts a seven-day stretch for the Orioles that carries significance on several fronts, most notably dropping Baltimore (46-47) one game under .500 again. With six more games upcoming against American League East opponents — two against New York followed by four against the Tampa Bay Rays — Baltimore’s record could decide the course executive vice president and general manager Mike Elias will follow before the Aug. 2 trade deadline.

The Orioles had gone on a run before the All-Star break, including a 10-game winning streak that propelled them above .500 this late in the season for the first time since 2017. But two losses to the Rays dampened the mood slightly entering the break, and another defeat Friday leaves Baltimore teetering.

There’s still time to return to form. Rattling off wins in the next six games would go a long way in proving this team has earned a chance to compete for a wild-card spot rather than face a veteran sell-off. The first of those key contests took a turn in the third inning, however.

With a 1-2 count against Joey Gallo — who sported a .162 batting average — Wells couldn’t spot his pitches. He walked Gallo with two outs, then gave up a single. That walk proved costly, bringing Judge to the plate in position to hit the three-run blast.

Doubles from Josh Donaldson and Jose Trevino plated another run before Judge’s fifth-inning homer, leaving Wells with five runs allowed on five hits in five innings — breaking a streak of 17 straight starts with three runs or fewer, an Orioles record. A solo homer from Gallo and RBI single from Isiah Kiner-Falefa

Baltimore responded to that first Judge homer with two runs in the bottom of the third, as Jorge Mateo’s double scored Ramón Urías and Cedric Mullins’ single scored Mateo, all with no outs. But with the bases loaded, Austin Hays popped out. A groundout from Urías in the sixth scratched across another run.

The blast from Santander turned it into a game again, even if Baltimore couldn’t fully get over the hump of Judge’s league-leading 35th and 36th long balls of the campaign.

The momentary speculation regarding another injury for a highly ranked pitching prospect nearing his major league debut was quelled Friday night when the Orioles announced the one-inning appearance from left-hander DL Hall was planned.

Hall, who ranks as Baltimore’s third-best prospect according to Baseball America, left his start for Triple-A Norfolk after allowing one run on two hits in his one inning. He struck out another two batters, bringing his total across his last five appearances to 42. Hall could be with the Orioles as soon as next week, but there are no guarantees.

The worry around Hall’s early absence stemmed in part from right-hander Grayson Rodriguez’s departure earlier this season as he approached a promotion to the majors. Rodriguez initially felt what appeared to be shoulder discomfort, but what was eventually diagnosed as a lat muscle strain has shelved Baltimore’s top prospect since early June.

Hall appears to be ready for the majors. The 23-year-old experienced a spell of pitch tipping in June, allowing nine earned runs between two starts. But his July has been strong for the Tides, with just two earned runs against him in 21 2/3 innings.

>> Manager Brandon Hyde said the All-Star break “came at the right time” for Hays. Still nursing a sore wrist entering the break, Hays’ wrist felt as good as it has for some time Friday, Hyde said.

>> Three Orioles minor leaguers were named to the Dominican Summer League All-Star game on Sunday: infielder Aron Estrada and right-handers Harif Frias and Eris Rodriguez. Estrada, 17, has hit .371 with three homers in 89 at-bats. The 21-year-old Frias has struck out 37 batters in 22 1/3 innings and Rodriguez, 20, has a 2.55 ERA in nine games.