Over-the-counter supplements that claim to boost a person’s memory and cognitive function may be useless, experts warn, and while there are little direct harm from the pills themselves they may lead to people delaying seeking out medical treatment for potential issues.

Experts warn that while the supplements often contain an amalgamation of vitamins, minerals and other nutrients that are great from brain health, the pills themselves do not translate to any benefit.

The contents of the pills are safe, though. Many of the ingredients are in common foods a person would be eating anyways. A person who feels that they are suffering symptoms of a cognitive issue may turn to the pills instead of a physician, though, and not seek out care early enough that intervention could slow down issues.

While these supplements are sold in many stores and on popular online retailers like Amazon, they are rarely approved by the Food and Drug Administration and are held to an extremely low standard compared to prescription drugs. 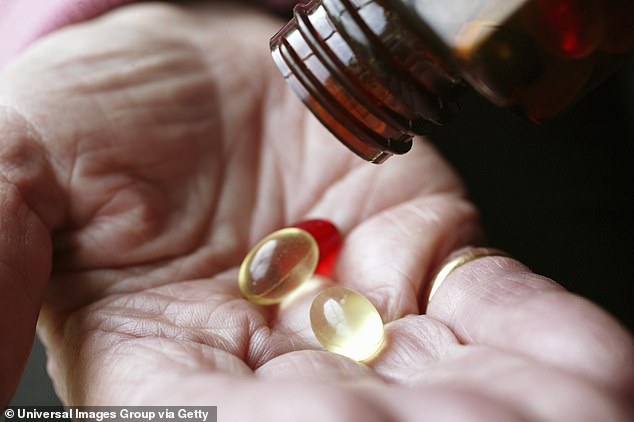 Experts warn that supplements that claim to boost cognitive function are generally useless, and could prevent a person from seeking real medical care for early stage cognitive issues (file photo)

‘People have been using supplements for memory boosting for hundreds of years, and some are so common you find them for sale in a grocery store,’ Dr Douglas Scharre, a neurologist at Ohio State, told UPI.

‘The truth is, for some people, these products may provide some benefit, but for most they do not.’

These supplements can be both a waste of time and money.

The AARP warned in 2019 that 25 percent of adults aged 50 and older took the supplements.

As a result, the age cohort spends around $93 million each month – over $1 billion every year – on the pills that rarely if ever do anything beneficial.

‘Supplements for brain health appear to be a huge waste of money for the 25 percent of adults over 50 who take them,’  Sarah Lenz Lock, senior vice president for policy at the AARP said.

She added: ‘These people taking these pills are spending between $20 and $60 a month and flushing dollars down the toilet that could be better spent on things that actually improve their brain health.’

These pills are not highly regulated either, meaning there is not clinical backing behind the claims of effectiveness that they make.

‘The market is so large they get by without rigorous documentation of the efficacy of their products,’ Ronald Peterson, director of the Mayo Clinic Alzheimer’s Disease Research Center, said in an AARP release.

The organization notes that the supplement industry thrives on the lack of regulation, and current major players have no reason to change their standard of operation unless forced to do so.

Supplements sold over-the-counter do not contain controlled substances – if they did then the FDA would pull them from shelves – and are generally safe.

Doctors are still scared that some are turning to these practically-useless pills instead of seeking out medical care to treat the early signs of cognitive issues.

‘Memory loss has always been a concern for people as they age,’ Dr Anne Hume, a professor of pharmacy practice at the University of Rhode Island , told UPI.

‘Lots of people are taking these supplements because they want to prevent Alzheimer’s and dementia.’