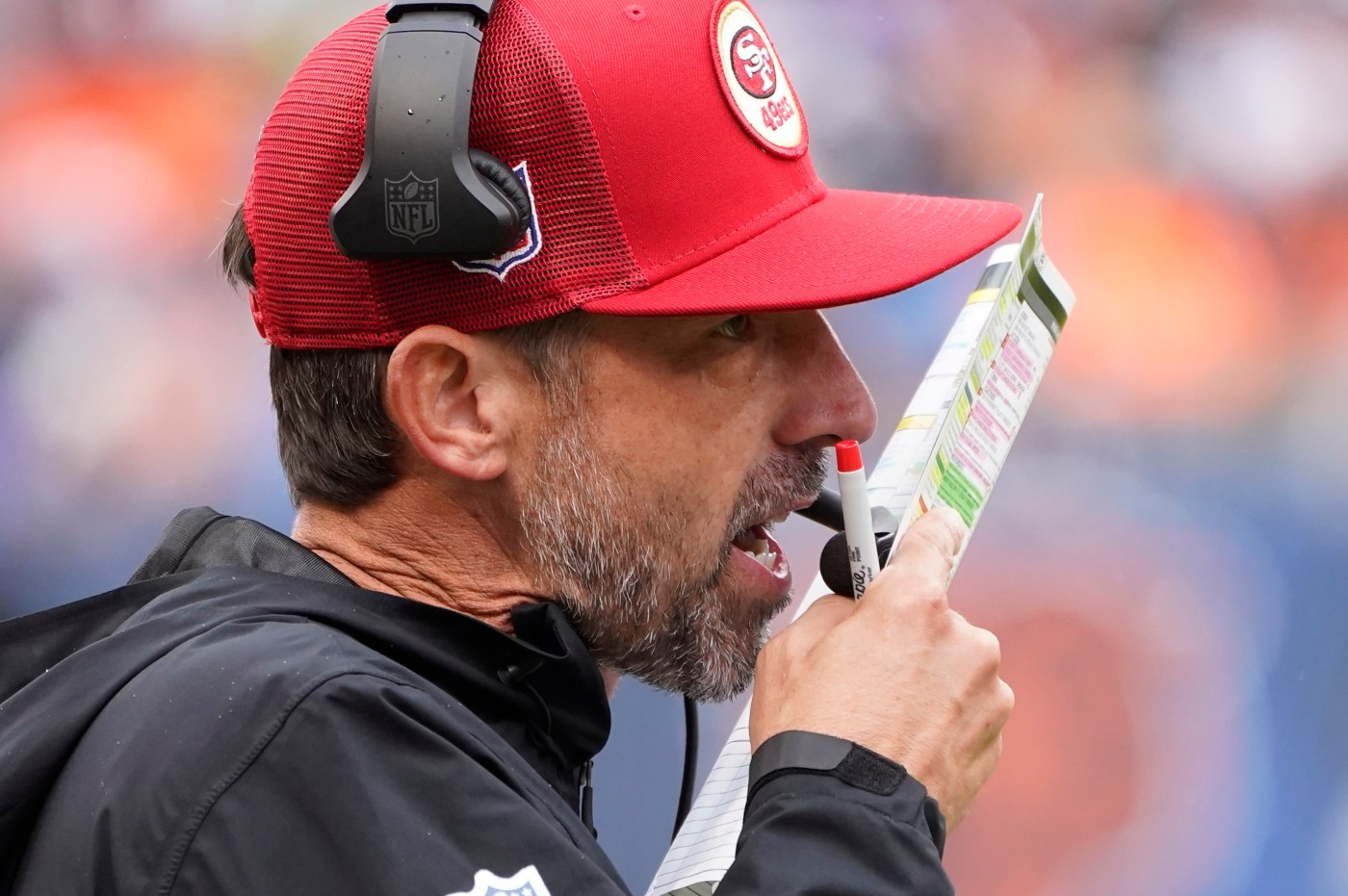 CHICAGO — Here is how the 49ers graded in Sunday’s 19-10 season-opening loss to the Chicago Bears:

Obviously the rainy weather made passing difficult, but it’s not why Trey Lance had a fourth-quarter pass intercepted on a drive in which the 49ers needed to answer the Bears’ go-ahead touchdown. Lance said his eyes didn’t trick safety Eddie Jackson long enough on that failed attempt to Jauan Jennings. Now, Lance did throw one of the mystical darts in a long time by a 49ers quarterback when he zipped a 20-yarder through multiple defenders and into Ray-Ray McCloud’s mitts. Long completions to Jennings (40 yards) and Brandon Aiyuk (31 yards) also were encouraging. But Lance and Shanahan mourned an overthrow of a potential touchdown to Tyler Kroft, who, remember, was making his 49ers debut in place of the injured George Kittle. Mike McGlinchey aptly scolded himself for a first-half sack that prevented a field-goal attempt, and Brandon Aiyuk had a catch wiped out for pass interference. Lance’s passer rating: 50.3 (13-of-28, 164 yards).

Deebo Samuel’s first-series fumble aside, the rushing attack started promisingly. There was a nice mix of Samuel, Lance and Elijah Mitchell. Then Mitchell got hurt in the second quarter. Then the rushing game bogged down, other than Lance desperately rushing to move chains. The option attack offered some creative looks, and the 49ers finished with an average of 4.8 yards per carry (37 for 176 yards). Three false-start penalties didn’t help matters.

Third-down sacks by Samson Ebukam and Nick Bosa set an early tone … that Justin Fields eventually changed with his scrambling ability. Coverage snafus also arose, especially on the 51-yard bomb to 49ers castoff Dante Pettis that ignited the Bears’ comeback. Fields was just 8-of-17 for 121 yards, and he had a pass intercepted by Talanoa Hufanga. But the 49ers should have pinned him in more, and too often there was an escape hatch up the middle for him to run or throw.

The Bears stubbornly kept giving the ball to David Montgomery (17 carries, 26 yards) to run into a pile of bodies at the line of scrimmage. Khalil Herbert found more success and scored their final touchdown. But what really wrecked this unit were penalties, questionable ones or not. Dre Greenlaw and Azeez Al-Shaair both knew Fields liked to slide at the last second, yet both linebackers got penalized for hitting the quarterback after he surrendered with a slide. Worse than that, Greenlaw drew a facemask penalty — he insisted he only brushed the facemask and didn’t grab it — to nullify a third-down stop.

Well, the 49ers wanted to improve in this category this season, and Ray-Ray McCloud didn’t botch any punt or kickoff that he fielded. Robbie Gould only got to attempt (and make) one field goal and one point-after kick; his counterpart missed two point-after attempts. Mitch Wishnowsky pinned 3-of-4 punts inside the 20, including one that Pettis foolishly fielded inside the 10.

Blowing a 10-point lead to a talent-starved Bears team with a first-year coach? Ooph. This was a disaster created by a dozen penalties, a couple of turnovers and a second-half freefall.