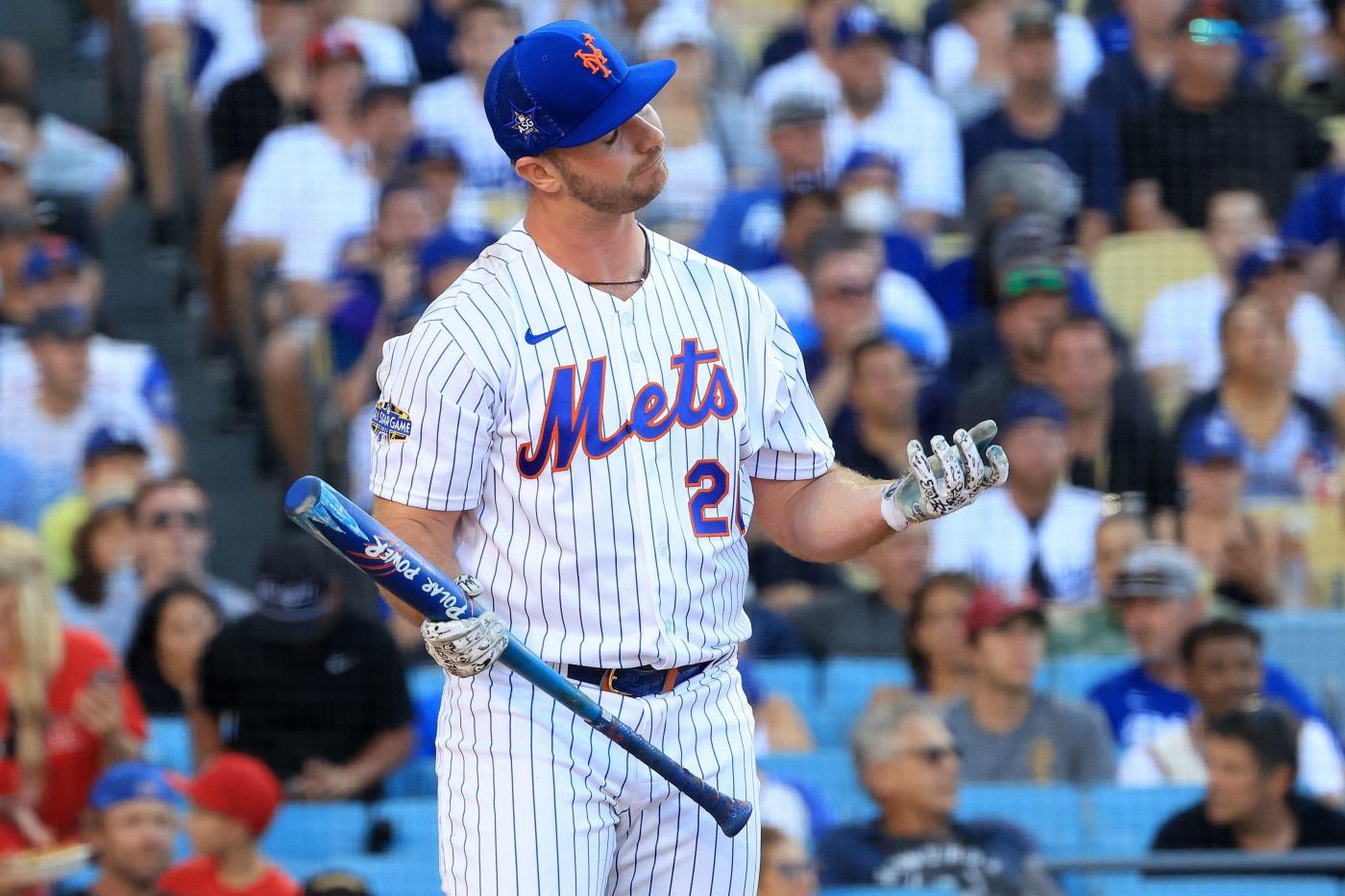 The reign of terror is over.

There was no three-peat, or three-Pete, at the Home Run Derby. Mets’ first baseman Pete Alonso chased his third straight victory at the event and came up short. Mariners’ phenom Julio Rodriguez proved too big of a roadblock, beating Alonso in the semifinals before Juan Soto took him out in the final round. Soto, 23, became the second-youngest person to ever win the Home Run Derby.

Don’t tell that to Alonso, who takes the Home Run Derby as seriously as anyone ever has. Alonso described himself as “in the zone” during the ESPN broadcast, keeping his interview very short and continually mentioning that he was competing for something “bigger than himself”, saying his winnings would go to the foundation he and his wife founded.

Before things kicked off, Alonso was lifting weights. Between his rounds, the Mets’ burly bro spent his time in the Dodger Stadium batting cage rather than rubbing elbows and swapping smiles with his fellow All-Stars. Everyone else was there for pleasure; Alonso came to Los Angeles for business.

Those minutes of meditation, the time spent visualizing a third straight win, the physical advantage of relaxing in the air-conditioned stadium rather than the sunbaked field. None of it paid off for the two-time defending champ, who has a real gift for this sort of thing, but couldn’t find the mojo that won him the novelty trophy in 2019 and 2021.

Coming into the night as the odds-on favorite, Alonso was seen as the man who simply does not lose in the Home Run Derby. The baseball world may have underestimated Rodriguez, who posted the first back-to-back 30-homer rounds in derby history before running out of gas in the final round.

Alonso got through NL East rival Ronald Acuna Jr. in the first round, topping the Braves’ stud 20 to 19. Going second in that round, Alonso knew exactly how many big flies he needed to move on. The same was true of the second round, but thanks to Rodriguez’s effortless power, the number to advance was 32 instead of 20. That iceberg proved to be too big for the Polar Bear.

Rather than the night belonging to the Mets’ slugger, it was about the future and the past of the sport. Rodriguez is going to be one of the best players in the universe, full stop. He’s already an All-Star as a rookie — an obvious honor for the first player in league history to post 15 homers, 50 RBI and 20 stolen bases through his first 90 career games — and the 21-year-old has now deposed the Home Run Derby champion.

But Albert Pujols slithered his way into the spotlight as well. Twice Rodriguez’s age, the first-ballot Hall of Famer pulled a huge upset in the first round. Facing the number one seed in Kyle Schwarber (who earned the seed thanks to having the most homers of anyone in the field), Pujols out-homered the Phillies’ lefty in their head-to-head battle.

Only added to the NL All-Star roster as a sort of lifetime achievement honoree, and placed in the Home Run Derby to drum up viewership and nostalgia, Pujols ended up sticking around longer than anyone could have guessed. What a surprise for the man currently playing his 22nd MLB season.

Alonso will no doubt receive some ribbing from his Mets’ teammates when he returns to them after the All-Star break. But with the Mets in the best position of Alonso’s career, the importance of his actual baseball schedule should allow for a quick grieving process.

As one Mariner eliminated Alonso, he also prevented the Mets’ towheaded hitter from matching the greatest Mariner of all time. Alonso’s loss means that Ken Griffey Jr. is still the only player to win the derby three times.

If anyone knows that, and is shaken up over it, it’s Pete Alonso. He can still get revenge next year, as the event shifts to Seattle, giving him an opportunity to turn the tables on Rodriguez and Griffey in the city that worships them.