Pope lands in Canada, set for apologies to Indigenous groups 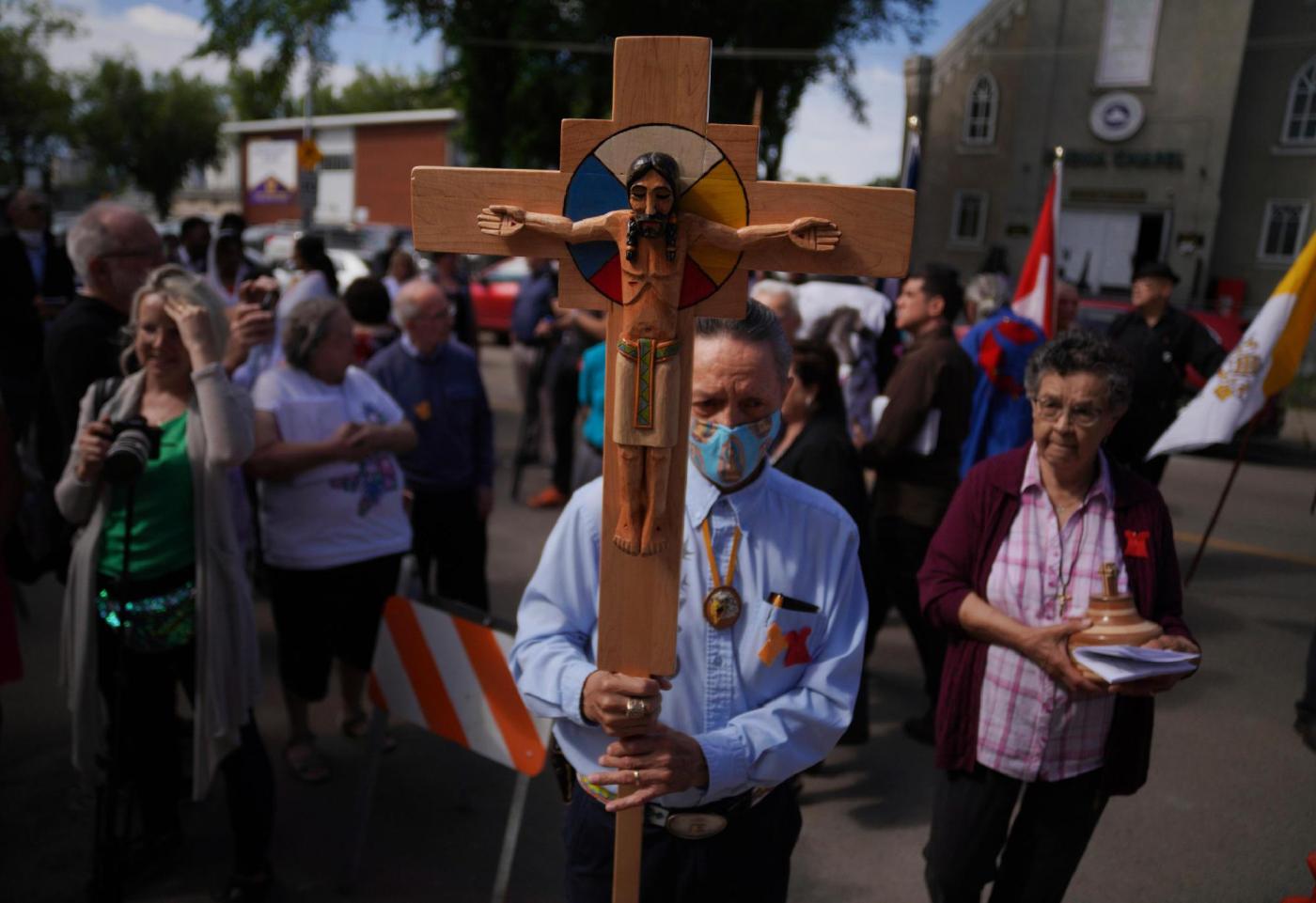 By NICOLE WINFIELD and ROB GILLIES

EDMONTON, Alberta (AP) — Pope Francis began a fraught visit to Canada on Sunday to apologize to Indigenous peoples for abuses by missionaries at residential schools, a key step in the Catholic Church’s efforts to reconcile with Native communities and help them heal from generations of trauma.

Francis flew from Rome to Edmonton, Alberta, where his welcoming party included Canadian Prime Minister Justin Trudeau and Mary May Simon, an Inuk who is Canada’s first Indigenous governor general. Francis had no official events scheduled Sunday, giving him time to rest before his meeting Monday with survivors near the site of a former residential school in Maskwacis, where he is expected to deliver an apology.

Francis, in a wheelchair, exited the back of his plane with the help of an ambulift before being driven in a compact white Fiat to an airport hangar where he was greeted by Trudeau, Simon and other dignitaries.

Indigenous drums and chanting broke the silence as the welcome ceremony began. A succession of Indigenous leaders and elders greeted the pope and exchanged gifts.

Aboard the papal plane, Francis told reporters this was a “penitential voyage” and he urged prayers in particular for elderly people and grandparents.

Indigenous groups are seeking more than just words, though, as they press for access to church archives to learn the fate of children who never returned home from the residential schools. They also want justice for the abusers, financial reparations and the return of Indigenous artifacts held by the Vatican Museums.

“This apology validates our experiences and creates an opportunity for the church to repair relationships with Indigenous peoples across the world,” said Grand Chief George Arcand Jr., of the Confederacy of Treaty Six. But he stressed: “It doesn’t end here – there is a lot to be done. It is a beginning.”

Francis’ week-long trip — which will take him to Edmonton; Quebec City and finally Iqaluit, Nunavut, in the far north — follows meetings he held in the spring at the Vatican with delegations from the First Nations, Metis and Inuit. Those meetings culminated with a historic April 1 apology for the “deplorable” abuses committed by some Catholic missionaries in residential schools.

The Canadian government has admitted that physical and sexual abuse were rampant in the state-funded Christian schools that operated from the 19th century to the 1970s. Some 150,000 Indigenous children were taken from their families and forced to attend in an effort to isolate them from the influence of their homes, Native languages and cultures and assimilate them into Canada’s Christian society.

Then-Prime Minister Stephen Harper issued a formal apology over the residential schools in 2008. As part of a lawsuit settlement involving the government, churches and approximately 90,000 surviving students, Canada paid reparations that amounted to billions of dollars being transferred to Indigenous communities. Canada’s Catholic Church says its dioceses and religious orders have provided more than $50 million in cash and in-kind contributions, and hope to add $30 million more over the next five years.

Canada’s Truth and Reconciliation Commission in 2015 had called for a papal apology to be delivered on Canadian soil, but it was only after the 2021 discovery of the possible remains of around 200 children at the former Kamloops residential school in British Columbia that the Vatican mobilized to comply with the request.

“I honestly believe that if it wasn’t for the discovery … and all the spotlight that was placed on the Oblates or the Catholic Church as well, I don’t think any of this would have happened,” said Raymond Frogner, head archivist at the National Centre for Truth and Reconciliation.

Frogner just returned from Rome where he spent five days at the headquarters of the Missionary Oblates of Mary Immaculate, which operated 48 of the 139 Christian-run residential schools, the most of any Catholic order. After the graves were discovered, the Oblates finally offered “complete transparency and accountability” and allowed him into its headquarters to research the names of alleged sex abusers from a single school in the western Canadian province of Saskatchewan, he said.

While there, he found 1,000 black-and-white photos of schools and their students, with inscriptions on the back, that he said would be valuabe to survivors and their families hoping to find traces of their loved ones. He said the Oblates agreed on a joint project to digitize the photographs and make them available online.

The Inuit community, for its part, is seeking Vatican assistance to extradite a single Oblate priest, the Rev. Joannes Rivoire, who ministered to Inuit communities until he left in the 1990s and returned to France. Canadian authorities issued an arrest warrant for him in 1998 on accusations of several counts of sexual abuse, but it has never been served.

Inuit leader Natan Obed personally asked Francis for the Vatican’s help in extraditing Rivoire, telling The Associated Press in March that it was one specific thing the Vatican could do to bring healing to his many victims.

Asked about the request, Vatican spokesman Matteo Bruni said last week that he had no information on the case.

At a news conference Saturday in Edmonton, organizers said they will do all they can to enable school survivors to attend the papal events, particularly for the Maskwacis apology and the Tuesday gathering at Lac Ste. Anne, long a popular pilgrimage site for Indigenous Catholics.

Both are in rural areas, and organizers are arranging shuttle transport from various park-and-ride lots. They noted that many survivors are now elderly and frail and may need accessible vehicle transport, diabetic-friendly snacks and other services.

The Rev. Cristino Bouvette, national liturgical coordinator for the papal visit, who is partly of Indigenous heritage, said he hopes the visit is healing for those who “have borne a wound, a cross that they have suffered with, in some cases for generations.”

Bouvette, a priest in the Diocese of Calgary, said the papal liturgical events will have strong Indigenous representation — including prominent roles for Indigenous clergy and the use of Native languages, music and motifs on liturgical vestments.

Bouvette said he’s doing this work in honor of his “kokum,” the Cree word for grandmother, who spent 12 years at a residential school in Edmonton. She “could have probably never imagined those many years later that her grandson would be involved in this work.”

Associated Press religion coverage receives support through the AP’s collaboration with The Conversation US, with funding from Lilly Endowment Inc. The AP is solely responsible for this content.