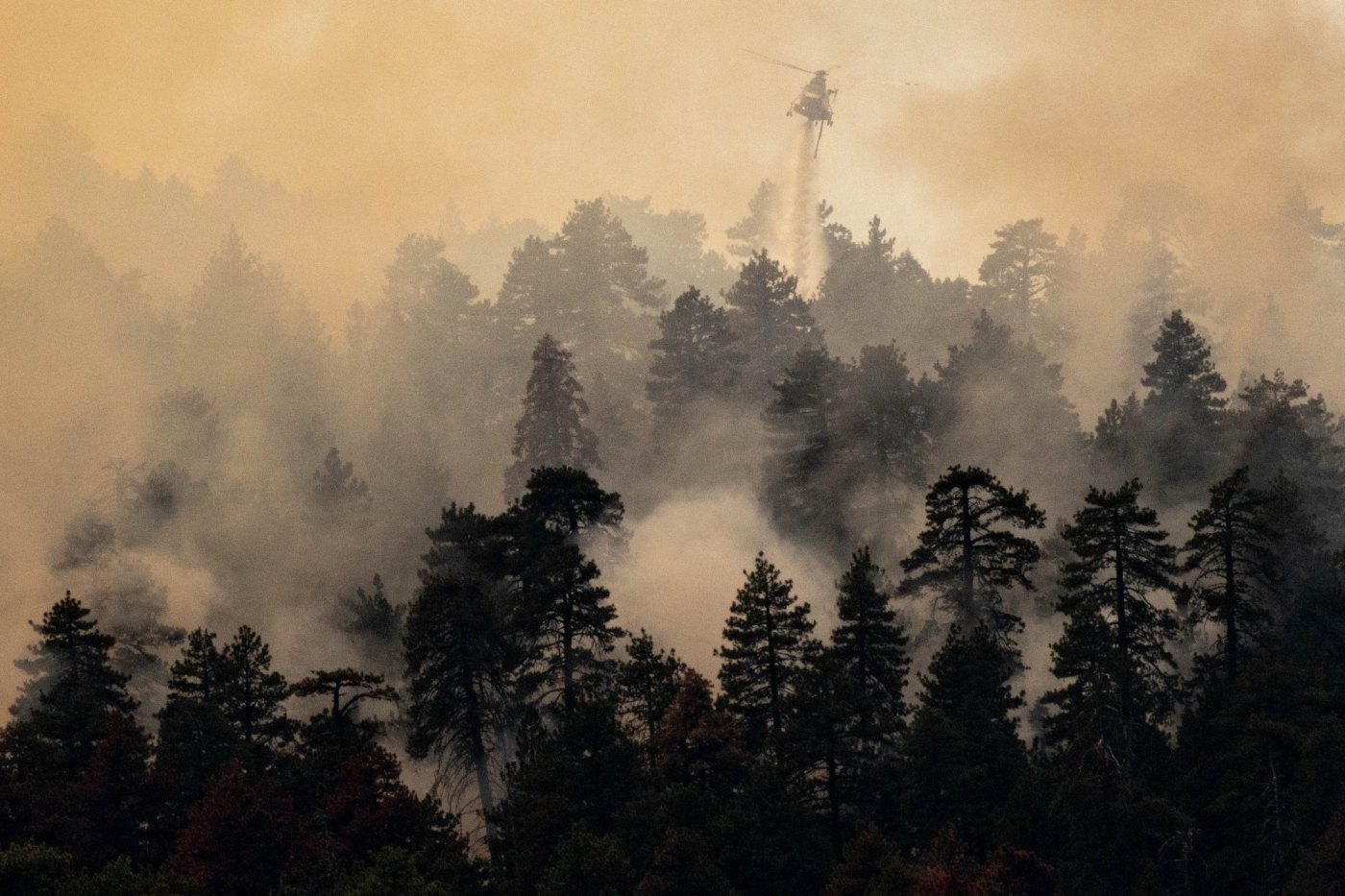 Jake Rodriguez, a spokesman for the San Bernardino National Forest, said Thursday morning, Sept. 8, that more than 630 firefighters were assigned to fight the blaze, which was at 2% containment.

The lack of growth is good news to Troy and Didi Emanuelson — who recalled that on Monday, Sept. 5, when helicopters zoomed overhead, dropping water onto the fire, they knew something serious was happening.

The couple has lived in the Moonridge community, a mile and a half from Bear Mountain, for a little more than four years and own a property-management company. They had never needed to evacuate. When conditions had not improved by Tuesday morning, the couple left.

“We weren’t like, ‘Let’s take a bunch of things from the house.’ We just grabbed a couple little things just to be gone,” Emanuelson said. “There was a lot of anxiety.”

By 9 a.m. Thursday, some residents reported rain in the area, with hopes it could help firefighters extinguish the blaze.

Weather could definitely play into the battle against the fire, but perhaps not in a good way.

“It could present some challenges,” Rodriguez said. “We have the potential for heavy east winds today and tomorrow, possibly up to 50 miles per hour.

“We have heard from some folks out there that they have been getting some rain, but we’re not sure if it’s enough to do anything,” he said. “We’re watching the winds and the way the weather pattern could push or change the fire.

“With east winds, it could push the fire towards the west and there are canyons there that line up north-south, so we could potentially see some northern pushes of the fire.”

No structures had been damaged or destroyed, officials said, but several businesses had closed, leaving sidewalks nearly empty. Only five restaurants, a jerky shop, a tattoo parlor and a liquor store were open Wednesday afternoon.

The Radford fire is south of the Snow Summit ski resort, north of the Barton Flats area. It’s three-quarters of a mile from the nearest residential area, the Moonridge neighborhood, where some of the evacuations have been ordered.

It’s raining in Big Bear! 🥳 Between the heroic efforts of our brave firefighters and volunteers and Mother Nature, hopefully the #RadfordFire has met its match once and for all. https://t.co/Ugkk9mXpU3

The Emanuelsons fled to Agoura Hills and planned to wait out the fire in a hotel. Most of the updates they’ve received about the fire and the conditions of the neighborhood have been word-of-mouth from the tight-knit community.

With a tropical storm anticipated to bring more rain this weekend, they’re hoping they can return home after the weekend.

“We’ve very stressed about our homes up in Big Bear, it’s a scary feeling,” Emanuelson said.

Evacuations remained in place for the Moonridge neighborhood from Summit Boulevard to Club View Drive and Evergreen Drive to the north. Orders were also in place for the area bordered by the Pineknot, Skyline and Castlerock trails and Knickerbocker Road, officials said.

Another order was in place from Glass Road to Fork River Road and warnings were in place for areas east of Club View Drive to Angeles Camp Road and Highway 18 to the north to areas between Deer Canyon and Sand Canyon Road to the south.

Of the 1,394 homes checked within the evacuation order, San Bernardino County sheriff’s deputies made contact with residents in 294, spokeswoman Mara Rodriguez said: 240 of those residences evacuated, while 54 households remained at their homes. At the other homes, no one answered the door.

The fire also led to the evacuation of 56 birds and small mammals and 24 reptiles from the Big Bear Alpine Zoo, county spokeswoman Felisa Cardona said. About 31 larger mammals remained on site with staff.

The cause of the fire, which broke out about 1:30 p.m. Monday, was under investigation.