Ravens rookie TE Isaiah Likely felt ‘like a little kid on Christmas’ during preseason debut vs. Titans – The Mercury News 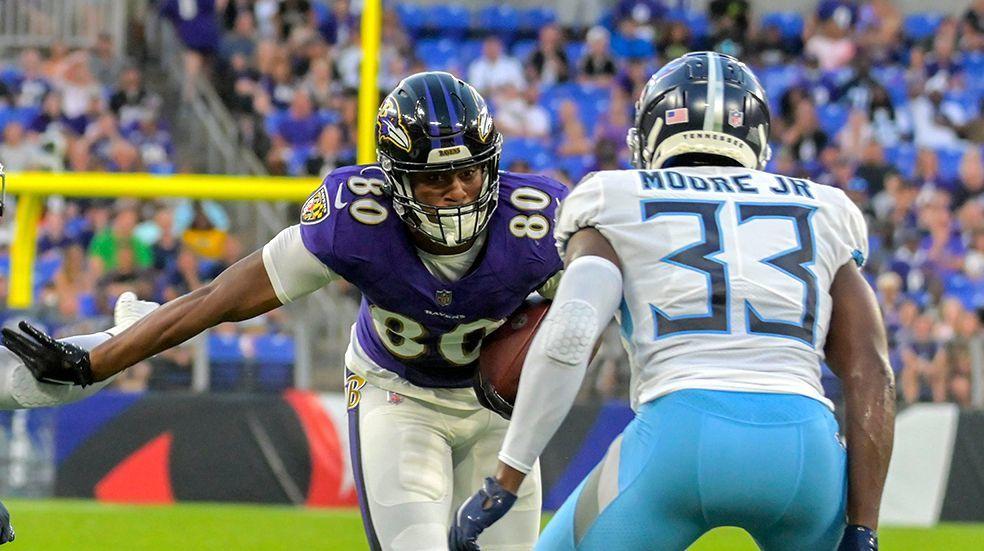 Thursday night might have been just a preseason game for the Ravens, but for rookie tight end Isaiah Likely, he felt “like a little kid on Christmas.”

Baltimore’s 23-10 victory over the Tennessee Titans at M&T Bank Stadium was Likely’s first taste of an NFL game. And even though Likely admitted he had jitters pregame, the former Coastal Carolina standout was able to lock in and show why it might be difficult for the Ravens to keep him off the field this season.

“Just living out my dream and being that superhero to the little kids is always a blessing,” said Likely, who caught four passes for 44 yards.

Likely’s first catch came with eight minutes to go in the first quarter, a simple 3-yard gain that turned into one of several highlight reels of the night. After catching a pass from quarterback Tyler Huntley, Likely shook a Titans defender before making a few more jukes and securing a first down. Coach John Harbaugh joked after the game that while Likely needed the first juke, “the next four were unnecessary.”

“But I told him, ‘It’s good to see you can do them. That was good,’” Harbaugh said jokingly.

Even Likely, a fourth-round draft pick in April, admitted that he made too many jukes during that play, but he said his mind was racing.

Likely moved like a wide receiver in a tight end’s body. When he made an impressive 22-yard catch over Titans linebacker Chance Campbell, a Calvert Hall grad, in the middle of the second quarter — resembling some of the leaping grabs he made during practice — it’s easy to understand why Huntley affectionately called him “a dog.”

“He’s going to prove to a lot of people that he’s here to play football,” Huntley said. “I think he’s a great player. He’s got a lot to learn, but he’s on the right path, for sure.”

There were some rookie moments, too. Likely’s learning curve was evident when he picked up two holding penalties in the first half, one of which negated a long run. Harbaugh mentioned how all of the team’s holding penalties throughout the night were on the edge “where it gets called tighter.”

“You just have to understand that, and he’ll have to learn that,” Harbaugh said. “But, he stepped up and played really well. He has a lot of talent, and he keeps improving every day.”

Said Likely: “It’s just adversity. Coming into your first game, there are a lot of things happening at once, and your excitement level is at an all-time high, especially playing in the National Football League. So, there are just things I’ve got to clean up — myself, in blocking, hand placement — and just keep on building upon them.”

Likely, who totaled 2,050 yards and 27 touchdowns in four seasons in college, has been compared to fellow teammate Mark Andrews, which he called a blessing. He has embraced playing alongside Andrews and star quarterback Lamar Jackson, soaking in as much information as possible.

“I get to literally go to practice and get to pick their brains apart on little details I might see differently or what they might have done differently,” he said. “And [with] Lamar [Jackson], on a route, I might have to speed up; on a block, I might have to seal faster, and just be able to build upon that [to do it in games] the right way.”