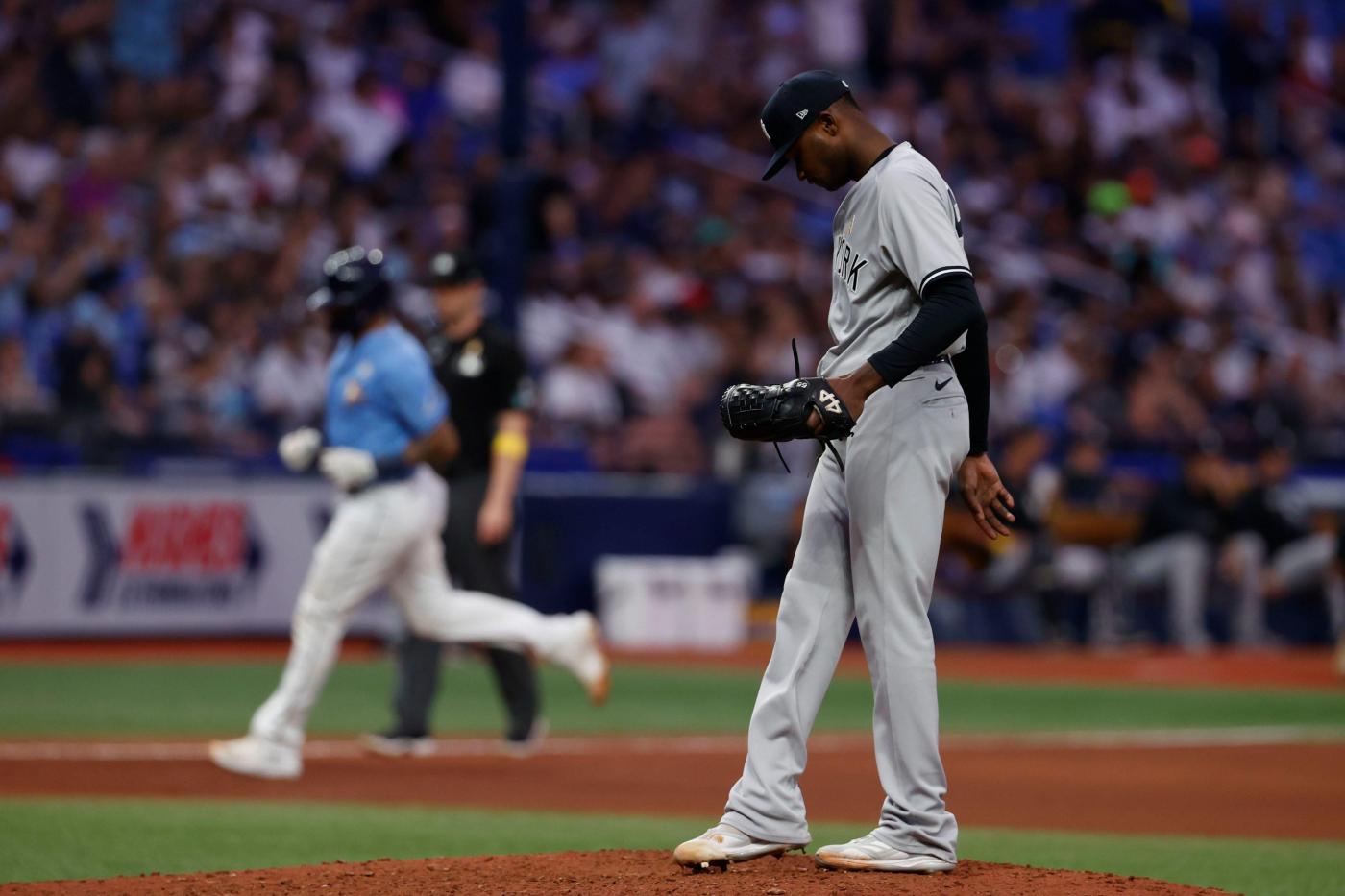 ST. PETERSBURG — It was embarrassing and alarming. The Yankees played sloppy defense behind a solid Domingo German and couldn’t get a run across Friday night as the Rays shut them out 9-0 at Tropicana Field to cut the Bombers’ lead in the American League East to just five games.

“It’s just embarrassing when you get beat like that and you’re going through the struggles you are,” Yankees manager Aaron Boone said. “I’m in charge of this team, what we’re going through right now, I know better than anyone, there’s going to be hard moments and hard times. I do think the effort is there, I think the care is there. But, we’ve set a much better standard in that room that we’ve got to start living up to it.”

The Yankees are now 11 games under .500 since July 2, when this slide began. They are 15-26 since the All-Star break and 8-12 in their last 20 games. The Rays have gone 18-8 since August 3, when the Bombers held a 15-game lead in the American League East. With the win, the Rays closed the gap to five games in the division, four games in the loss column.

“Nobody likes to lose,  but we’re gonna see what this team is made of,” Aaron Judge said when asked if the team was embarrassed and pissed off. “No team has ever coasted into the postseason.  and expect to go out there and win. We got to bring it every single day. So today’s over with, we gotta bring it tomorrow, plain and simple. That’s what it really comes down to pissed off, not pissed off whatever you got to bring it every single day.”

Friday, the Yankees did not bring good at-bats.

The Yankees were shut out for the 12th time this season, the sixth time in the last 25 games. They were shut out six times in the first 107 games of the season. The nine-run margin was their worst loss since Oct. 2, 2021 against the Rays.

They had their chances, but with a depleted lineup, they went 0-for-7 with runners in scoring position. They are without Anthony Rizzo, who had an epidural to try and stop the nagging back pain that has limited him in the second half of the season. They lost Andrew Benintendi, arguably their best contact hitter,  to a wrist injury during the game. DJ LeMahieu is dealing with a toe issue that bothers him when he swings and hasn’t had an extra-base hit since Aug. 6. Giancarlo Stanton is 3-for-26 since coming off the injured list. Gleyber Torres is hitting .189 in the second half. Judge, who went 0-for-2 with a walk, has carried the offense, but it’s easier for teams to pitch around him when nobody else is a threat.

“At the end of the day, we haven’t been great as a team scoring with guys on base getting out and getting the big hit,” Josh Donaldson said. “And I also think it goes down to how other teams are pitching pretty well and you gotta give them credit as well. But we need to do a better job of making things happen and I’m speaking to myself first and foremost.”

Donaldson went 0-for-4 with two strikeouts Friday night and committed two errors on back-to-back plays that led to the Rays’ first run in the fourth. Only a tremendous play and throw by Oswaldo Cabrera from right field saved the Bombers from being down two runs at that point.

“The first one I felt like I got a misread on the hop a little bit,” Donaldson said of the Harold Ramirez ground ball that got him too far back. “The second one, I made the right play, to start and I thought I was going to have a really good opportunity to get him out at second, when  I took  my look there, he was going to make it and so I had I tried to redirect and misfired.”

Cabrera had to come in to finish the at-bat for Andrew Benintendi in the third inning. The left fielder swung and missed on a pitch and immediately felt something in his right hand/wrist area. The Yankees announced the X-Rays on his wrist were negative, but Benintendi will undergo an MRI on Saturday.

With or without Benintendi, the Yankees are in a fight for their division now.

“We gotta bring it.  We’re still first place. I don’t want to hang my hat on that and like you said, we can talk about games up and all that, but all it takes is we gotta bring it,” Judge said. “We didn’t bring it tonight. They got our number, but that’s why you play three games in a series. That’s why we’ll be here for three days and they got the first one. We gotta bring it tomorrow.”