Review ‘Breaking’ is flawed but Williams’ last role is great 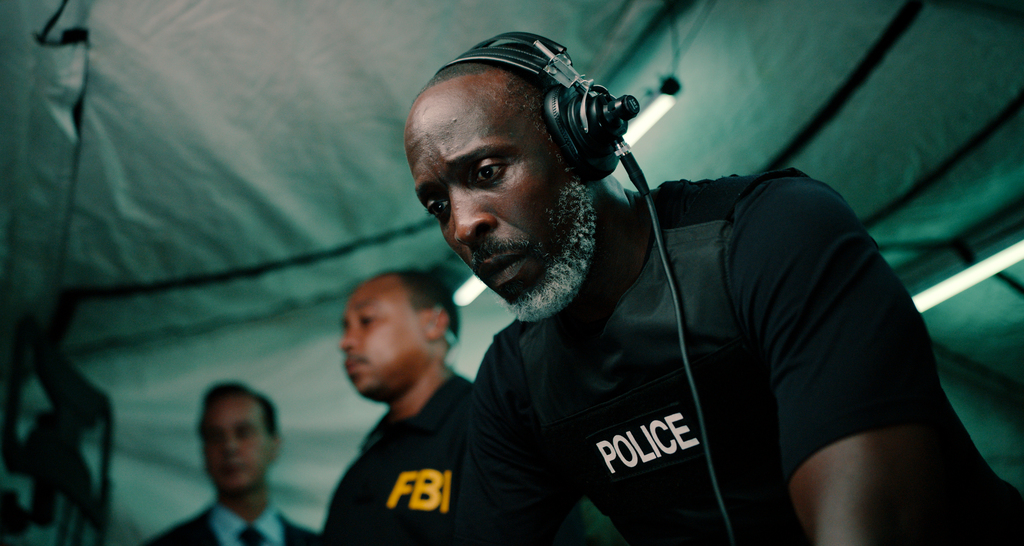 “Breaking,” Abi Damaris Corbin’s lean and heartfelt first feature, is a lackluster bank-robbery thriller with noble intentions enlivened by an impassioned performance by John Boyega and an elegiac final appearance by the late Michael K. Williams.

It’s not until well into “Breaking” that Williams, as a police negotiator, turns up. But the actor, who died last year, immediately reorients and deepens the film. As a sensitive ear to Boyega’s former Marine, who’s holed up inside an Atlanta-area Wells Fargo bank, Williams and his soulful, melancholy eyes bring a rush of empathy to the film, the white hair on his beard one last reminder of all the wise older characters the “Wire” actor might have gone on to play.

“Breaking,” which opens in theaters Friday, may go down primarily as a footnote in Williams’ career but it’s also a showcase for Boyega, an actor who, like Williams, has a powerful voice both on and off screen. He plays Brian Brown-Easley, who nervously and with little apparent plan walks into the bank and quietly informs the teller that he has a bomb.

Flashbacks fill in the tale, which comes from a true story from 2017. Disjointed scenes capture Brian’s long hours on the phone trying to get his disability check from the Department of Veteran Affairs. When he goes down to their offices and tells them he soon won’t be able to feed himself, he’s handed a pamphlet and told to take a number. It’s not until dozens of police are outside with snipers’ rifles aimed through the windows that we learn what Brian is owed: $892.34.

“Your life is worth more than that,” Williams’ police officer tells him.

“Breaking” is about how a feeling of worthlessness can push a person to the brink. Brian is only after what’s owed to him; he declines to take the bank’s money. He’s courteous to the two hostages, played by Nicole Beharie and Selenis Leyva. And, more than anything, he just wants to be heard, to not have his voice drowned out by VA bureaucracy and society’s disinterest. Inside the bank, Brian spends most of his time pleading for a negotiator to be assigned or imploring a local reporter (Connie Britton) for coverage. “Tell them about what’s happening!” he screams. As in Sidney Lumet’s “Dog Day Afternoon,” Brian’s gambit is more protest than heist.

But “Breaking,” penned by Corbin with the British playwright Kwame Kwei-Armah, struggles to mix elements on the ground with a character study into Brian’s life. Scenes over the phone with his estranged wife (Olivia Washington) and daughter (London Covington) are flat. And by the time “Breaking” creeps to its bloody climax, the movie has only made a thin sketch of its protagonist despite Boyega’s obvious dedication. Everything driving Corbin’s film is to be lauded, yet “Breaking” feels oddly lacking in drive. Brian, who clutches broken glasses throughout the film, never quite comes into focus.

Rating: PG-13 (for some violent content, and strong language)