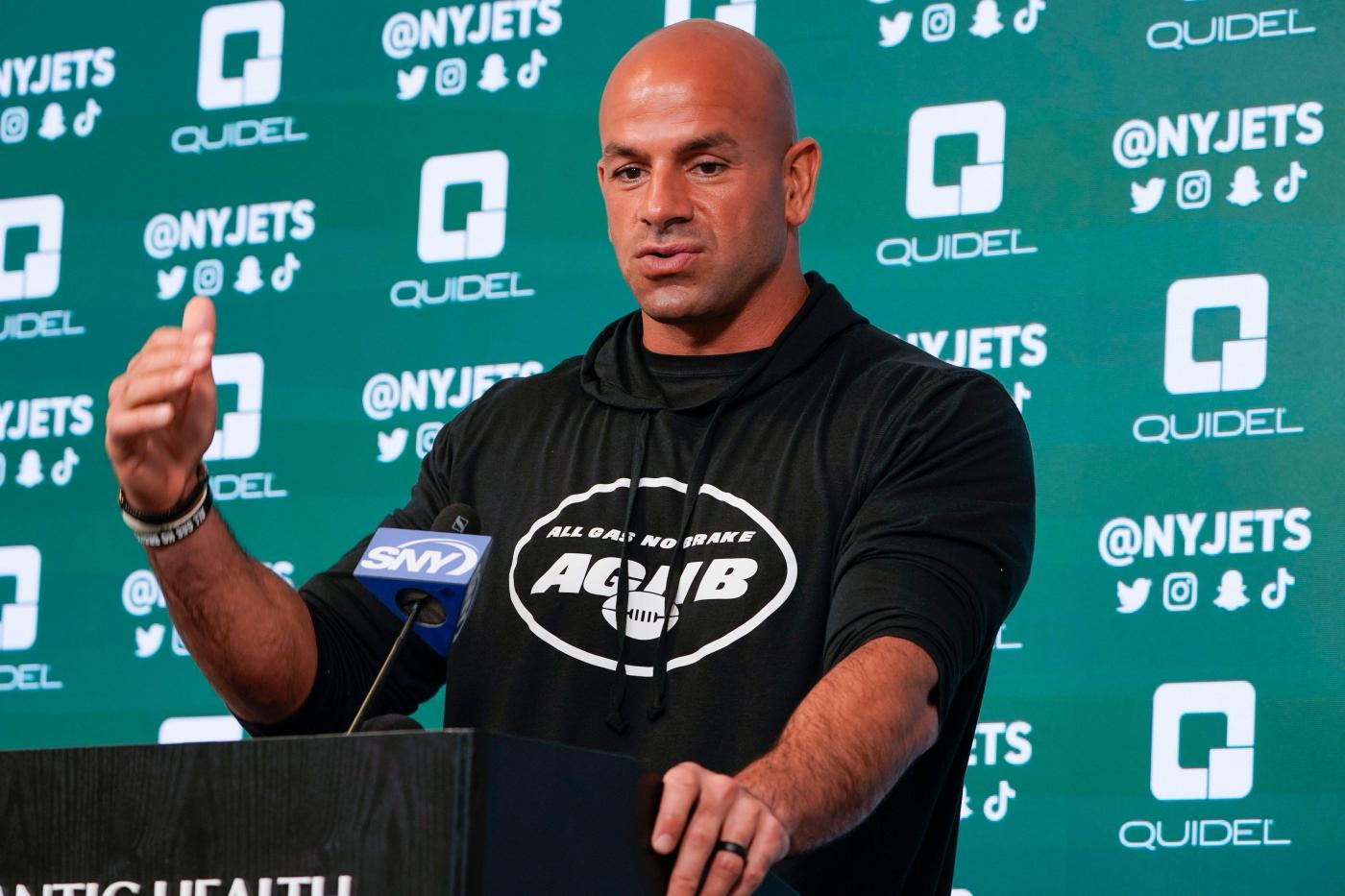 Unless he is intent on being a collaborator in his own coaching demise, there was no reason for Robert Saleh to drop his “receipts” bomb on the media, and forever disgruntled Jets fans, during a Monday Zoom call with boss scribes.

A couple of days later, the faux-beleaguered coach tried explaining why he went down a dead-end street, saying it was a way of defending his players. The problem was there was nothing to defend them against. Salah was tilting at windmills.

The media covering the Jets, including Valley of the Stupid Gasbags, has been patient (aka hands-off treatment) with the coach after his first season. If anything, his message of hope had been embraced. Saleh should be known as Kid Charmin. If anything, the media focus has been on the inevitable return of quarterback Zach Wilson.

Nonetheless, Saleh became the second prominent Jets employee to see ghosts when he said: “I’m taking receipts [on Jets critics], and I’m going to be more than happy to share them with all of you when it’s all said and done.” His comments made us wonder if someone had serenaded Saleh with old Jets rants voiced by the poster boy for Jets misery, and former WFAN yakker, Joe Benigno. Saleh’s alleged frustration boiled over during his paid segment on ESPN-98.7′s “The Michael Kay Show.” Saleh said he couldn’t wait “until it comes around and we shove it down everybody’s throat.”

Saleh has put himself in a box with the media. His “receipts” declaration makes Sunday’s game against Cleveland bigger than it should be. Unless the Jets media goes soft, every analysis of a loss should include a reminder about having to wait yet another day to ”shove it down everybody’s throat.” Around here, when a coach points fingers at (in this case Saleh threatened) the media, and is not successful on the field, buffoon status can be “achieved” quickly.

So, it’s worth wondering how Saleh concluded it was a fine idea to pop off. It doesn’t sound like something an experienced Jets PR staff would recommend. Does Saleh have a small circle of advisers (none who work for the Jets) who suggested he go on the offensive? Or did he arrive at the decision through some solo soul searching?

Get it? Saleh also leaves the door open to question his decision-making process. If it can be questioned in the “receipts” case, a communications matter, how soon will his on-field coaching decisions come under intense scrutiny? Through one season, and one game, Saleh has not exactly been put under a microscope.

And it’s not like all Gasbags lined up against Saleh. Some (including 98.7′s Kay and Peter Rosenberg and ESPN/SNY’s Bart Scott) said he had every right — and was righteous — to fire off verbal missiles at fans and media. Still does an organization, looking to escape from the woods of dysfunction into the open spaces of stability really need a coach dishing irrational ravings?

Or should Woody Johnson & Co. look forward to caricatures of Saleh, and a flood of receipts, gushing out of the Jets Clown Car.

That’s why it was unusual to see CBS Sports’ crew show restraint during the final two minutes of the Ravens’ 24-9 win over the Jets. As he was covering Jets wideout Elijah Moore, Baltimore cornerback Kyle Fuller went down. Viewers could see a distant camera shot of Fuller holding his knee while his concerned teammates moved in for a closer look.

After a brief pause, play-by-play voice Andrew Catalon, working with James Lofton, said: “We’ve been told we shouldn’t show a replay of this…” Catalon did not have to go into it further. CBS’ crew made the right call. The sight of Fuller, who suffered a torn ACL and is out for the season, going down was too gruesome. Even on an NFL Sunday.

While residents of the Mets and Yankees TV booths, and other Seamheads, were analyzing MLB’s rules changes, including whether the pitch clock will speed up the game, they didn’t go deep on if commercial time between innings should be reduced.

If the number of spots were limited to under two minutes (the current break between innings) the pace of the game would be accelerated. Recently, Mets shortstop Francisco Lindor wondered if the TV suits, and baseball owners, would sacrifice and take a commercial cut to speed up the game.

Why are the owners included in this equation? If YES or SNY’s ability to sell between innings commercials was cut to one minute, the value of the TV rights to their games would decrease in value.

It was a takeover, alright — more hostile than docile.

Joe Benigno stormed onto the Monday edition of WFAN’s “Tiki and Tierney” program and stole the show. Benigno was burning Jets fuel. His mouth was all gas, no break.

Tiki Barber and Brandon Tierney, two mouths who love the sound of their own voices, could hardly get a word in. At one point, Barber tried interrupting Benigno but was stuffed at the line of scrimmage. Benigno even came armed with one of his Jets conspiracy theories, suggesting the Jets won’t play Mike White at quarterback because they ”fear” he’s better than Zach Wilson. Of course, Benigno really believes this.

Twice, in NBC’s NFL Sunday Night Football studio, Tony Dungy mentioned how impressed he was by the league’s new coaches, specifying all by name except the Giants’ Brian Daboll. Dungy eventually went on Twitter and mentioned Daboll. One Peacock informer wondered if Dungy watched Giants-Titans. … Daboll is relaxed on his MSG coach’s show, much calmer than the animated Joe Judge. … Christopher (Mad Dog) Russo gloms much hype for his weekly spots on “First Take,” but his own regulars segments with Phil Simms and Steve Phillips on Doggie’s SiriusXM show are always compelling. During their recent one-on-one, Phillips said Mets owner Steve Cohen’s days of playing by the owner’s unwritten rules are coming to an end. “At some point, Steve Cohen is not going to play the ‘hands-off’ game, the former Mets GM said. Phillips said this could lead Cohen to make a serious run at Aaron Judge if he hits the free agent market. … Let’s hope that all mouths so eager to call Judge’s historic dingers that tie then break Roger Maris’ AL HR record don’t blow the calls. Lots of pressure involved in those moments. A miscue could stain a career. Anyone nervous yet? … The technical side has to tighten up too. On Tuesday (Yankees-Red Sox), TBS had a close call. The network returned from the commercial break about three seconds before Judge hit the first pitch of the sixth inning for a home run. … We know it’s too late for the Foxies to offer Gus Johnson and Joel Klatt any advice, but if they could they should’ve told them to pull-back down the stretch of the Alabama-Texas thriller. The two mouths would not shut up. … It’s early, but anyone else hoping Sean Payton, now working in Fox’s NFL studio, gets back into coaching — like tomorrow? … NBC Sports’ Fantasy Football Pregame with Matthew Berry will make its WNBC-TV Ch. 4 debut Sunday at noon. Berry’s show will go up against CBS (”The NFL Today”) and Fox (”NFL Sunday”) hour-long pregame studio shows.

DUDE OF THE WEEK: DOUG PEDERSON

The new Jaguars coach lost his first game and he did the unexpected. Pederson found his former quarterback, Washington’s Carson Wentz, and congratulated him on the Commanders’ 28-22 win. For Pederson, it was a display of class/sportsmanship in defeat.

DWEEB OF THE WEEK: MICAH PARSONS

After a disappointing season opener, the Dallas star defender skipped out on his new weekly paid guest spot on FS1′s Undisputed debate show. After a loss you must show your face and fulfill an obligation. Parsons sees it differently, saying after losing Dak Prescott: “I need to be a leader now and that’s not on TV.”

What Adam Silver meant to say: “I work for the owners. The grunts who keep the teams running? Not so much.”