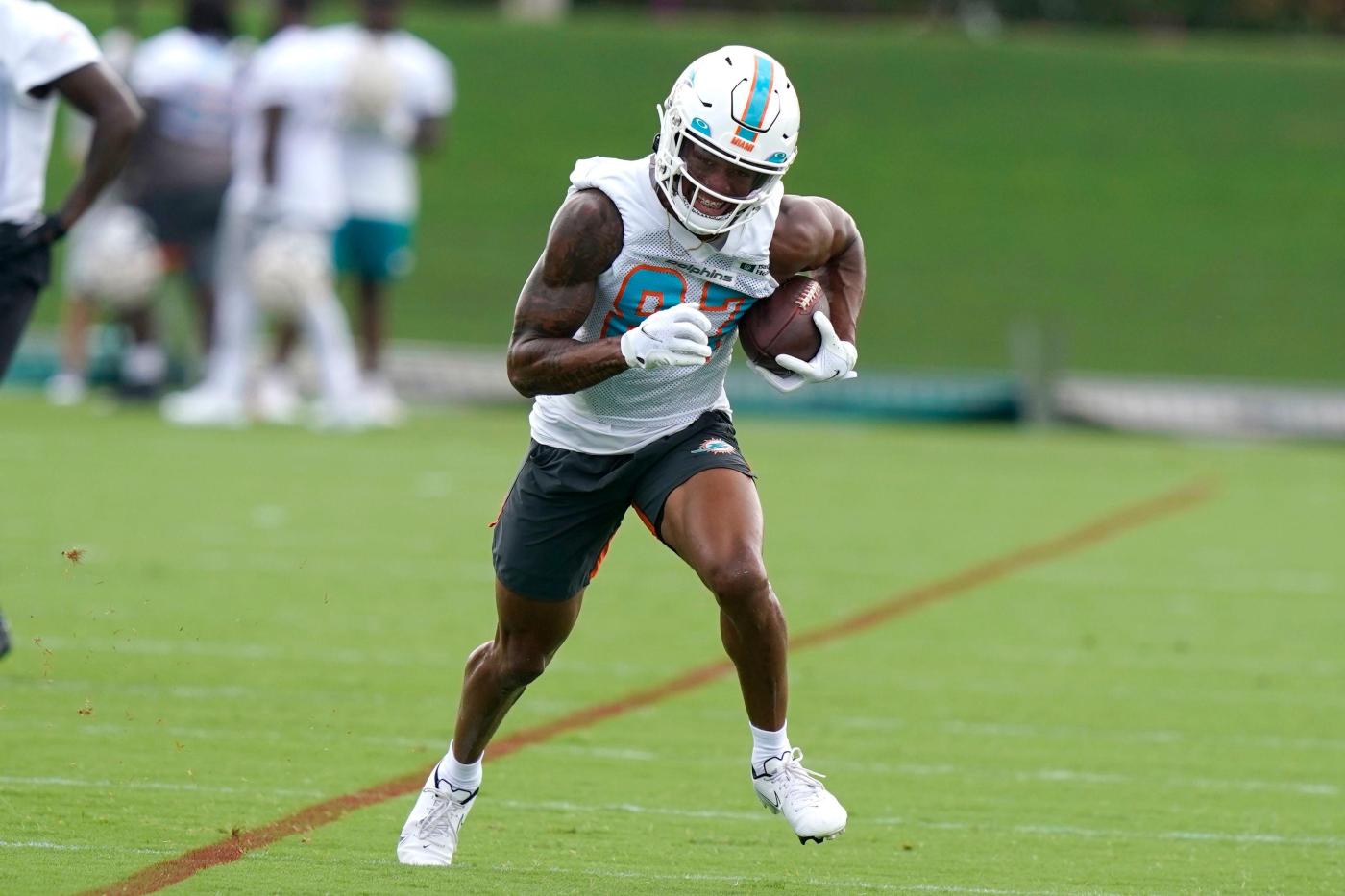 Erik Ezukanma began training camp at a whisper’s tone, but as practices have commenced the Miami Dolphins rookie receiver is beginning to scream for attention.

Ezukanma, a former Texas Tech standout the Dolphins selected in the fourth round of the 2022 NFL draft, has been making at least one head-nodding catch per day the past few practices.

During the 11-on-11 portion of Tuesday’s practice, which was Miami’s second practice in front of fans, the rookie caught a 30-yard tear drop pass from Tua Tagovailoa along the right sideline.

As impressive as the catch was, what stood out the most about the play was the stiff arm he gave the Dolphins defensive back, which put him on the ground and allowed Ezukanma and run with the ball an extra 15 yards for what would have been a 50-yard touchdown if the play had counted.

“I’m a rookie,” said Ezukanma, who is known for using his body (6-foot-2, 206 pounds) and bringing down contested catches the same way DeVante Parker would. “I’m trying to make plays and get the playbook right.”

As if the rookie’s draft status didn’t already keep him safe on the receiver depth chart and receiver hierarchy, the fact he’s clearly blossoming in Miami’s west coast offense is a good sign that he might contribute in 2022 because Ezukanma brings something completely different to Miami’s speed-heavy receiver unit.

“I know my play style is different from them, but I take some of their game and incorporate it in mine as well,” Ezukanma said, referring to Tyreek Hill and Jaylen Waddle. “I just go out there everyday and try to use what I do best.”

Greg Little and Larnel Coleman have struggled for most of camp, but the pair of reserve offensive tackles had a better showing on Tuesday in the first padded practice….

Tailback Chase Edmonds had a couple of nice runs, both inside and outside, and seems to be distancing himself from field when it comes to productivity….

Outside linebackers Cameron Goode and Melvin Ingram produced would-be sacks during the team’s 11-on-11 period….

Rookie quarterback Skylar Thompson had one of his better practices of camp on Tuesday, and it was highlighted by Trent Sherfield downfield catch along the left sideline, that would have been good for 35 yards.

Cornerback Xavien Howard got an extended amount of snaps during 11-on-11 period, and could be spotted shadowing Tyreek Hill, who had a quiet practice when lined up against the Dolphins’ Pro Bowl cornerback.

The right side of the Dolphins starting offensive line, which features Austin Jackson and Robert Hunt, was consistently moving defenders during the team’s first joint practice, opening right side holes for Miami’s tailbacks, who were able to turn the corner at ease during Tuesday’s session. If this remains consistent, and the Dolphins can produce a respectable — if not potent rushing attack — this offense could be scary.

Brandon Jones dropped a pass thrown directly to him from Tagovailoa during one of the 11-on-11 periods. That’s the second time since training camp started last week that Jones has dropped an interception put within his grasp. If Jones intends to be the impactful starting strong safety his first two seasons hints he could be, he’ll need to deliver on those types of plays.

Quarterback Teddy Bridgewater returned to throwing a day after not throwing during team periods on Monday.