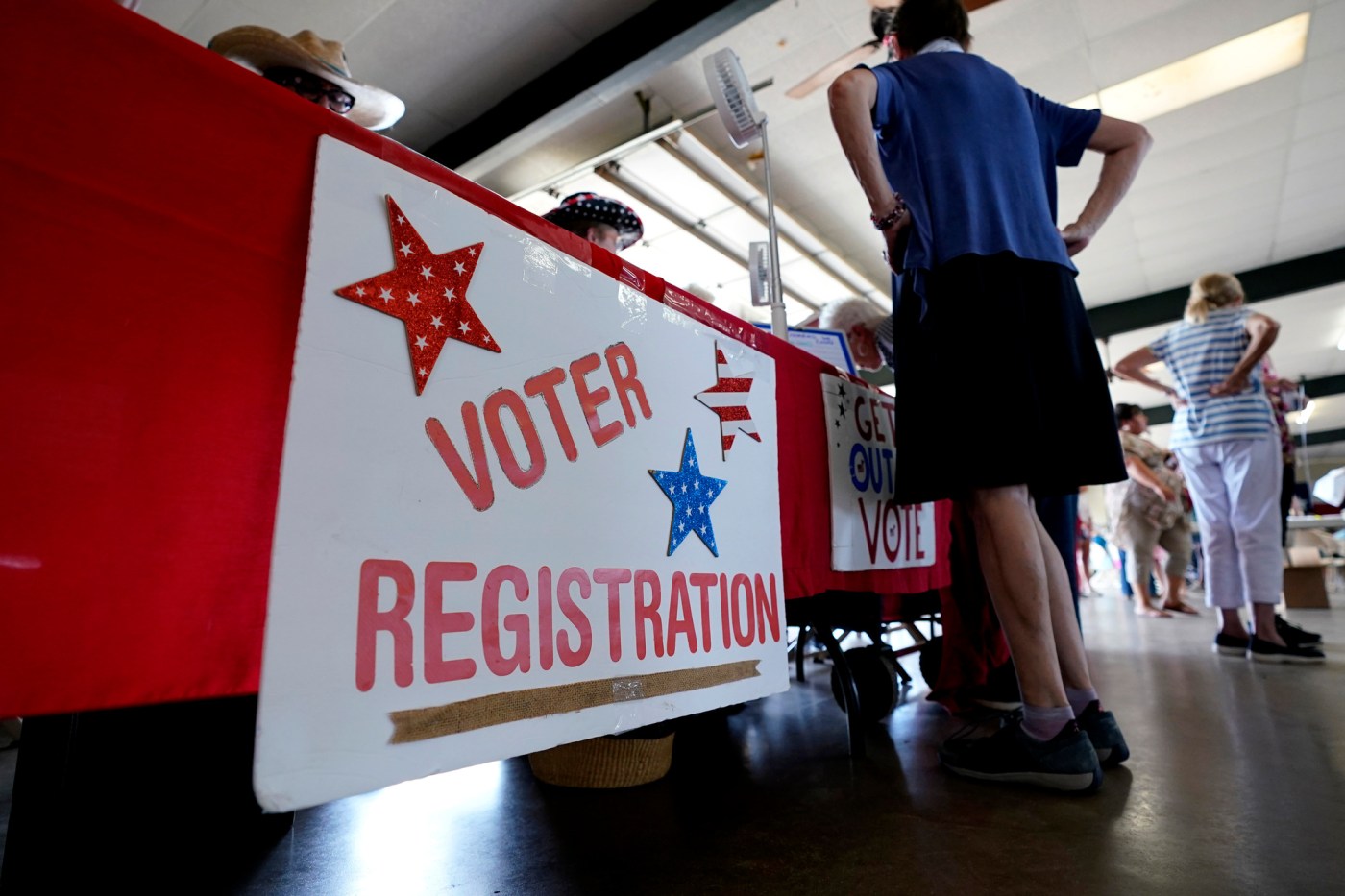 FREDERICKSBURG , Texas — Part of why Terry Hamilton says he abruptly left his job running elections deep in Texas wine country is by now a familiar story in America: He became fed up with the harassment that followed the 2020 election.

But this was no ordinary exit.

On the brink of November’s midterm elections, it was not just Hamilton who up and quit this month but also the only other full-time election worker in rural Gillespie County. The sudden emptying of an entire local elections department came less than 70 days before voters start casting ballots.

By the middle of last week, no one was left at the darkened and locked elections office in a metal building annex off the main road in Fredericksburg. A “Your Vote Counts” poster hung in a window by the door.

A scramble is now underway to train replacements and ground them in layers of new Texas voting laws that are among the strictest in the U.S. That includes assistance from the Texas Secretary of State, whose spokesperson could not recall a similar instance in which an elections office was racing to start over with a completely new staff. But the headaches don’t stop there.

The resignations have more broadly made the county of roughly 27,000 residents — which overwhelmingly backed former President Donald Trump in 2020 — an extraordinary example of the fallout resulting from threats to election officials. Officials and voting experts worry that a new wave of harassment or worse will return in November, fueled by false claims of widespread fraud.

Hamilton, who has clashed with poll watchers in Gillespie County in past elections, said he didn’t want to go through it again.

He declined to discuss the nature of the threats in a phone interview, referring questions to the county attorney, who did not respond to a phone message. Gillespie County Sheriff Buddy Mills said neither his department nor police in Fredericksburg had received information about threats from elections officials.

Hamilton worked under Anissa Herrera, the former county elections administrator whose resignation was first reported by the Fredericksburg Standard Radio Post. “I was threatened, I’ve been stalked, I’ve been called out on social media,” she told the outlet. “And it’s just dangerous misinformation.”

The departures pile on the examples across the U.S. of how death threats, harassment and unfounded accusations have driven local election officials from their jobs. Citing the potential effect on democracy, the U.S. Department of Justice launched a task force last year toaddress rising threats against election officials.

They are familiar to many election workers in Texas, which has been at the vanguard of a Republican campaign nationwide to tighten election laws in response to Trump’s baseless claims that the 2020 election was rigged. Supporters are easy to find in Gillespie County, a popular getaway to booming vineyards and vacation rentals in the scenic Texas Hill Country, which is a short day trip from the state’s liberal capital in Austin but separated by a gulf politically. In 2020, Trump won the county with nearly 80% of the vote.

But the resignations surprised Mo Saiidi, chairman of the Gillespie County GOP, who said recent elections had run smoothly. Hamilton said run-ins with poll watchers traced back to 2020 but said other issues weighed on the office, including what he contended was was a lack of support from the county. He also recently decided to run as a write-in candidate for county treasurer, which he said required him to step down.

Saiidi believes funding played a role. “They had some differences and they couldn’t come to a closure, and they decided in frustration to just quit,” said Saiidi, who also serves on the county’s election commission.

A survey released in March by the Brennan Center for Justice at the New York University School of Law found that one in three election officials knows someone who has left a job in part because of threats and intimidation, and that one in six had experienced threats personally.

In Texas alone, at least 37 election administrators since the 2020 election have left what were previously stable positions, said Trudy Hancock, president of the Texas Association of Elections Administrators, citing a presentation she had seen. There are 254 counties in Texas, not all of which have dedicated election administration offices.

Threats are not all that’s making the job tougher in Texas. A sweeping new voting law gives wide latitude to partisan poll watchers and threatens election workers with criminal charges for denying them access. The same law put new restrictions on mail voting but made a messy debut during Texas’ first-in-the-nation primary in March, when more 23,000 mail ballots were discarded outright as voters struggled to navigate the new rules.

It underscores the challenges a new staff will face getting up to speed under a time crunch. For now, Saiidi said the county clerk and tax assessor have been discussed as possible fills-in.

Hancock, who is also the elections administrator in Brazos County, said her workers could previously take angry calls as voters blowing off steam. “But in this climate and the things that go on now, we have to take everything serious and at face value,” she said.

Less than 24 hours after the office in Gillespie County officially cleared out, the resignations were front of mind at a pavilion in Fredericksburg, where Democrat Beto O’Rourke had swung through in his campaign to unseat Republican Gov. Greg Abbott.

Roger Norman, 60, felt the election was still in good hands but called threats a pattern of intimidation. Outside, at a counter rally of Trump supporters, welder Abel Salazar said he had no concerns with elections in the heavily conservative county and that interest in poll watching was high.

“There are a lot of people that have been volunteering,” Salazar, 53, said.

Hamilton said deadlines in his old office are already creeping up.

“They didn’t think we did anything,” he said. “Now they get to see what we did.”