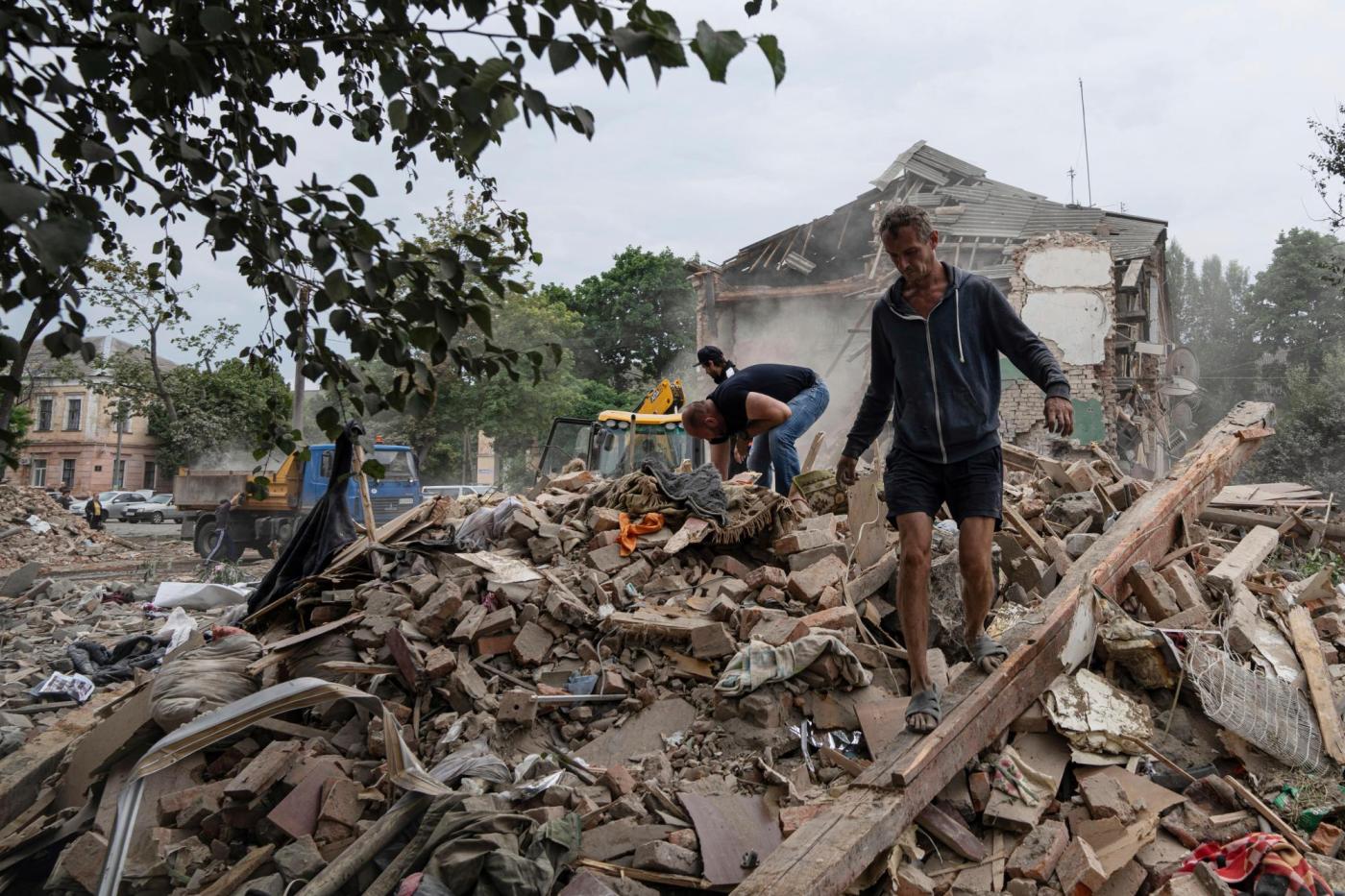 KRAMATORSK, Ukraine (AP) — Russian forces fired missiles and shells at cities and towns across Ukraine on Saturday after Russia’s military announced it was stepping up its onslaught against its neighbor. Ukrainian officials reported at least 17 more civilians killed.

Russian Defense Minister Sergei Shoigu gave “instructions to further intensify the actions of units in all operational areas, in order to exclude the possibility of the Kyiv regime launching massive rocket and artillery strikes on civilian infrastructure and residents of settlements in the Donbas and other regions,” his ministry said Saturday.

Russia’s military campaign has been focusing on the eastern Donbas, but the new attacks hit areas in the north and south as well. Kharkiv, Ukraine’s second-largest city, has seen especially severe bombardments in recent days, with Ukrainian officials and local commanders voicing fears that a second full-scale Russian assault on the northern city may be looming.

At least three civilians were killed and three more were injured Saturday in a pre-dawn Russian rocket strike on the northern Ukrainian city of Chuhuiv, which is close to Kharkiv and only 120 kilometers (75 miles) from the Russian border, a regional police chief said.

“Four Russian rockets, presumably fired from around (the Russian city of) Belgorod at night, at about 3:30 a.m., hit a residential building, a school and administrative buildings,” Bolvinov wrote on Facebook. He said the bodies of the three dead civilians were found under the rubble.

In the neighboring Sumy region, one civilian was killed and at least seven more were injured after Russians opened mortar and artillery fire on three towns and villages not far from the Russian border, regional governor Dmytro Zhyvytsky said Saturday on Telegram.

In the embattled eastern Donetsk region, seven civilians were killed and 14 wounded in the last 24 hours in attacks on cities, its governor said Saturday.

Later in the day, on the outskirts of Pokrovsk, a city in the Donetsk region, a woman said a neighbor was killed by a rocket attack Saturday afternoon. Tetiana Pashko said she herself suffered a cut on her leg, and one of her family’s dogs was killed.

She said her 35-year-old neighbor, killed while in her front yard, had evacuated earlier this year as authorities had requested but had returned home after being unable to support herself. Several homes on a quiet residential street were damaged, with doors and roofs torn up or ripped away.

“We can rebuild but we can’t bring her back,” said another neighbor, Olha Rusanova.

In the neighboring Luhansk region, however, Ukrainian troops repelled a Russian overnight assault on a strategic eastern highway, said Gov. Serhiy Haidai, adding that Russia had been attempting to capture the main road between the cities of Lysychansk and Bakhmut for more than two months.

“They still cannot control several kilometers of this road,” Haidai wrote in a Telegram post.

The Luhansk and Donetsk regions make up the Donbas, an eastern industrial region that used to power Ukraine’s economy and has mostly been taken over by Russian and separatist forces.

In Ukraine’s south, two people were wounded by Russian shelling in the town of Bashtanka, northeast of the Black Sea city of Mykolaiv, according the regional governor, Vitaliy Kim. He said Mykolaiv itself came under renewed Russian fire before dawn Saturday. On Friday, he posted videos of what he said was a Russian missile attack on the city’s two largest universities and denounced Russia as “a terrorist state.”

In Odesa, a port city on the Black Sea, a Russian missile hit a warehouse, engulfing it in flames and sending up a plume of black smoke, but no injuries were reported, local officials said.

Two people were killed and a woman was hospitalized after a Russian rocket strike on the eastern riverside city of Nikopol, emergency services said. Dnipropetrovsk Gov. Valentyn Reznichenko said a five-story apartment block, a school and a vocational school building were damaged.

The Ukrainian air force said Russian forces fired six more cruise missiles on Saturday from strategic bombers in the Caspian Sea, and two hit a farm in the Cherkasy region along the Dnieper River. No one was hurt, but agricultural equipment was destroyed and some cattle were killed, regional Gov. Ihor Taburets said. The Ukrainian air force said the other four missiles were intercepted.

The deadliest Russian attack this week came Thursday, when a Russian missile strike killed at least 24 people — including three children — and wounded more than 200 in Vinnytsia, a city southwest of Kyiv, the capital, far from the front lines. Three of those missing after the attack were found alive in the rubble Saturday and one person remained missing, the emergency service said.

Russia claimed the Kalibr cruise missiles hit a “military facility” that was hosting a meeting between Ukrainian air force command and foreign weapons suppliers. Ukrainian authorities insisted the site, a concert hall, had nothing to do with the military.

Ukraine’s Interior Ministry said Friday that Russian forces have conducted more than 17,000 strikes on civilian targets during the war, killing thousands of fighters and civilians and driving millions from their homes.

Russia’s invasion of Ukraine has also rippled through the world economy, hiking energy and food prices and crimping exports of key Ukrainian and Russian products such as grain, fuel and fertilizer.

Follow the AP’s coverage of the war at https://apnews.com/hub/russia-ukraine