Kremlin troops hit the Pivdennoukrainsk plant in Mykolaiv region, with a ‘powerful explosion’ taking place just 300 yards away from the reactors, breaking more than 100 windows in the complex.

Footage shows the site erupting into a huge fireball after the strike, illuminating the night’s sky in a blast of white light. 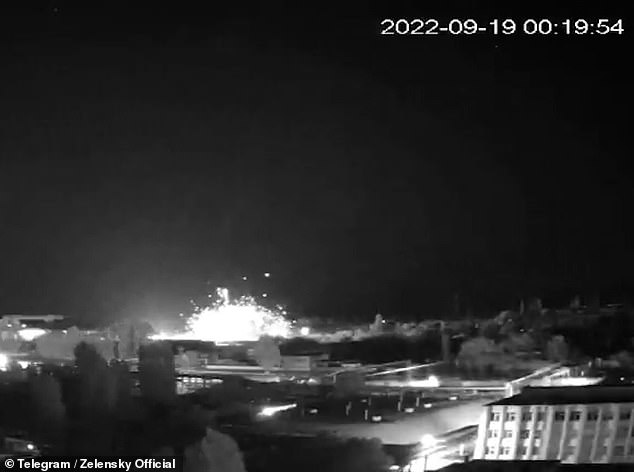 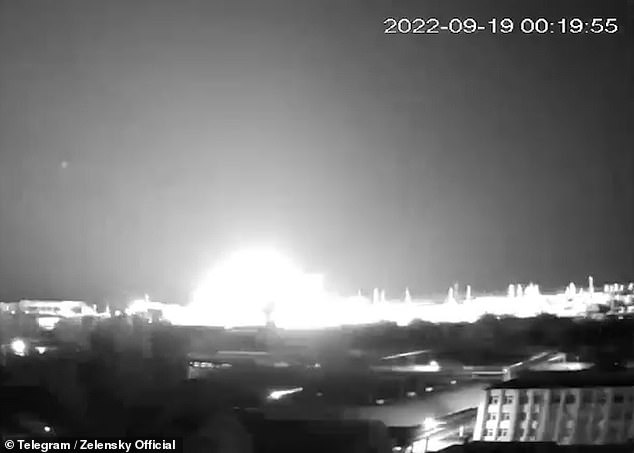 Kremlin troops hit the Pivdennoukrainsk plant in Mykolaiv region, with a ‘powerful explosion’ taking place just 300 yards away from the reactors 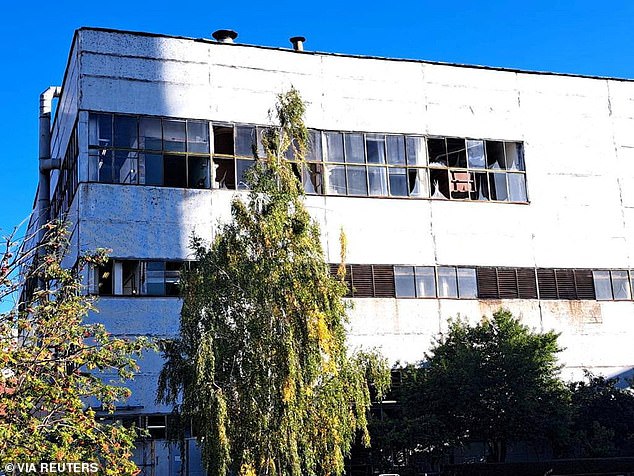 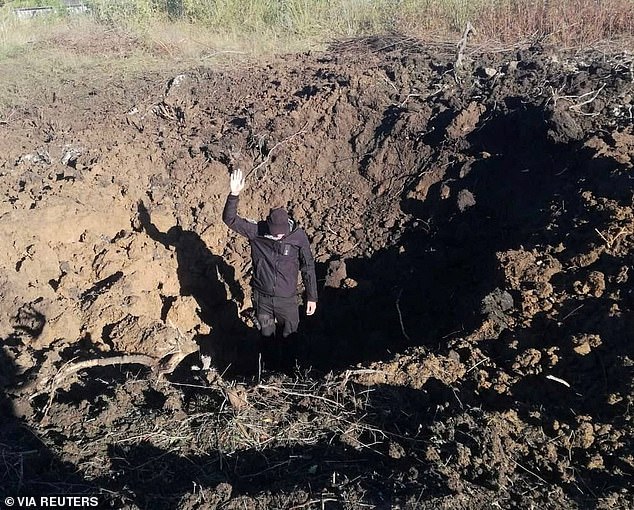 The three reactors at the Pivdennoukrainsk plant were not damaged and are working normally, Ukraine’s state nuclear company Energoatom said.

The Pivdennoukrainsk plant, also known as the South Ukraine Nuclear Power Plant, sits along the Southern Bug River and is about 190 miles south of the capital, Kyiv.

‘Currently, all three power units of the PNPP (Pivdennoukrainsk Nuclear Power Plant) are operating normally. Fortunately, there were no casualties among the station staff,’ Energoatom said.

It published two photographs showing a crater it said was caused by the blast. In one of the pictures a man stood in the crater to give a sense of its size.

Commenting on the strike on the Telegram messaging app, Ukraine’s President Volodymyr Zelensky said: ‘The invaders wanted to shoot again, but they forgot what a nuclear power plant is. Russia endangers the whole world. We have to stop it before it’s too late.’ 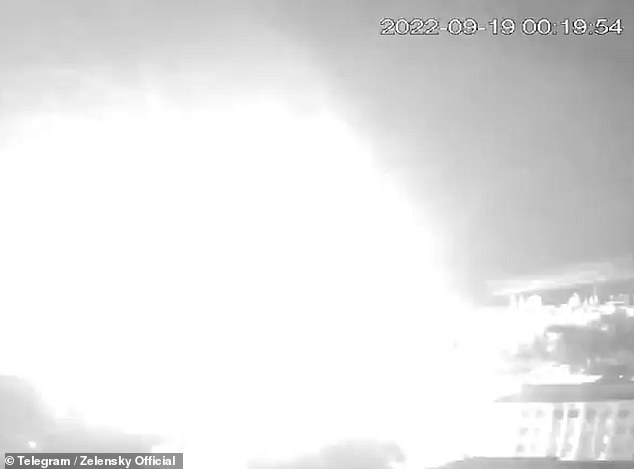 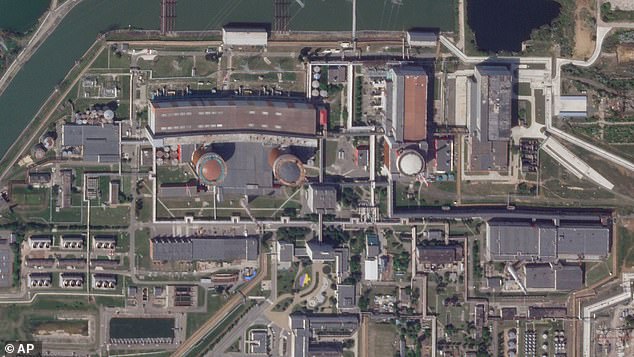 There was no immediate Russian reaction to Ukraine’s accusations.

The Mykolaiv region has been under constant rocket attack by Russian forces in recent weeks.

Another Ukrainian nuclear power plant at Zaporizhzhia – which is Europe’s largest and lies about 155 miles east of the Mykolaiv site – was shut down earlier this month due to Russian shelling, prompting concerns about a possible nuclear disaster.

Russia and Ukraine have blamed each other for shelling at the Zaporizhzhia plant, which is held by Russian forces but operated by Ukrainian staff. The shelling has damaged buildings and disrupted power lines.

The U.N. nuclear watchdog said this weekend one of the four main power lines at the Russian-held Zaporizhzhia nuclear facility had been repaired and was once again supplying the plant with electricity from the Ukrainian grid.

Some military analysts have said Russia might stage a nuclear incident at Zaporizhzhia, which is held by Russia but run by Ukrainian staff, in response to Ukraine’s sudden counter-surge which has repelled Putin’s men. 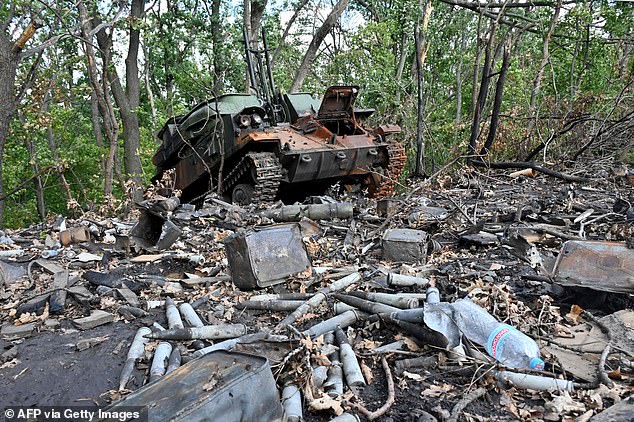 A view of an abandoned military position not far from city of Balakliya, Kharkiv region 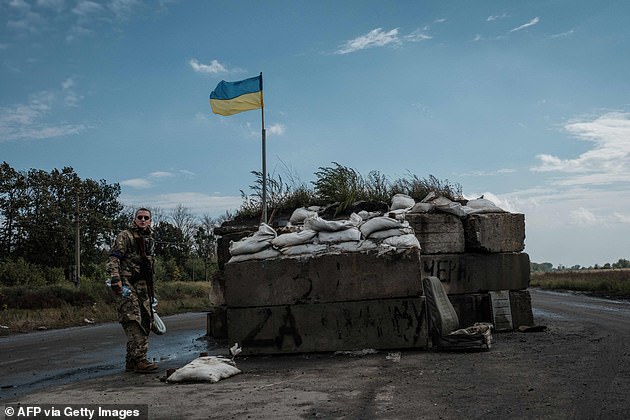 A soldier stands at retaken checkpoint in Shevchenkove, Kharkiv region, amid Ukraine’s counter-offensive

Within the last 10 days, Russia has highly likely lost at least four combat jets, taking its attrition to about 55 since the beginning of its invasion, the British military said today.

There is a realistic possibility that the uptick in losses was partially a result of the Russian Air Force accepting greater risk in a move to provide close air support to Russian ground forces under pressure from Ukrainian advances, the Defence Ministry said in its daily intelligence on Twitter.

Russian pilots’ situational awareness is often poor, it said. ‘There is a realistic possibility that some aircraft have strayed over enemy territory and into denser air defence zones as the front lines have moved rapidly.’

U.S. Army General Mark Milley, chairman of the Joint Chiefs of Staff, called for vigilance on Sunday after visiting a base in Poland aiding Ukraine’s war effort.

‘The war is not going too well for Russia right now so it’s incumbent upon all of us to maintain high states of readiness, alert,’ he said after his trip to the base, which reporters travelling with him were asked not to identify.

With its battlefield losses mounting, the Russian army is seeking contract soldiers for what it calls the ‘special military operation’ in Ukraine, and is offering nearly $3,000 a month as an incentive.

It comes as Zelensky vowed there would be no let-up in fighting to regain territory lost to Russia as Kyiv said its troops had advanced to the eastern bank of the Oskil River, threatening Russian occupation forces in the Donbas.

Crossing the Oskil is another important milestone in Ukraine’s counter-offensive in the northeastern Kharkiv region as it flows south to the Siversky Donets River, which goes right through Luhansk, one of two provinces in the Donbas region.

Donbas is Ukraine’s traditional industrial heartland made up of the Donetsk and Luhansk regions.

Ukrainian troops ‘have pushed across the Oskil. From yesterday, Ukraine controls the east bank,’ the Ukrainian Armed Forces wrote on Telegram late Sunday. 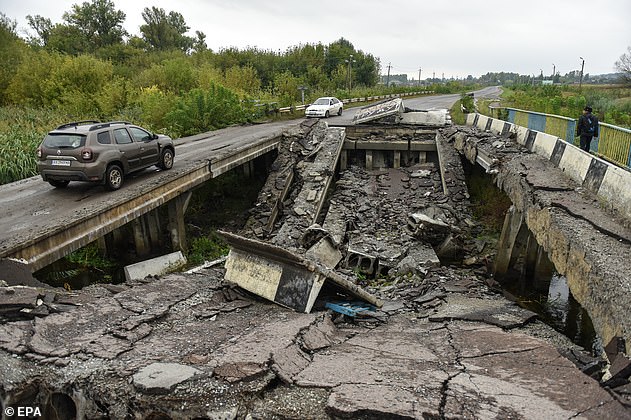 People cross a damaged bridge in Kharkiv region, northeastern Ukraine, as Russian troops are pushed back

Serhiy Gaidai, governor of Luhansk region, wrote on Telegram: ‘Luhansk region is right next door. Decoccupation is not far away.’

Zelensky vowed to keep up the pressure on Moscow after Ukraine’s rapid gains in Kharkiv this month.

‘Perhaps it seems to some of you that after a series of victories we now have a lull of sorts,’ he said in his regular nightly address on Sunday. ‘But there will be no lull. There is preparation for the next series … For Ukraine must be free. All of it.’

Russian artillery pounded towns and villages across the frontlines in the east and south on Sunday, including civilian infrastructure in Zaporizhzhia city, Ukrainian officials said.

‘As it faces setbacks on the front lines, Russia has likely extended the locations it is prepared to strike in an attempt to directly undermine the morale of the Ukrainian people and government,’ Britain’s defence ministry said. 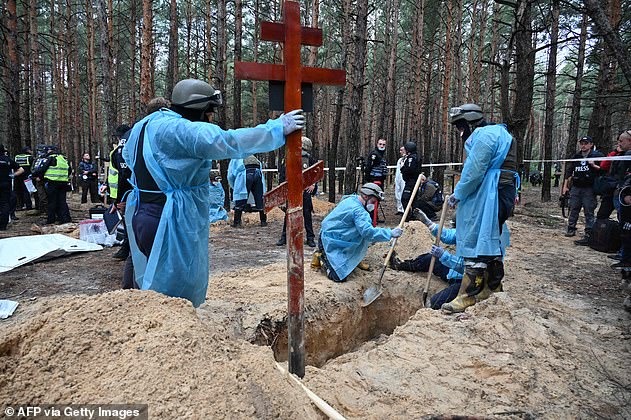 Forensic technicians dig a grave in a forest on the outskirts of Izyum, eastern Ukraine on September 16, 2022 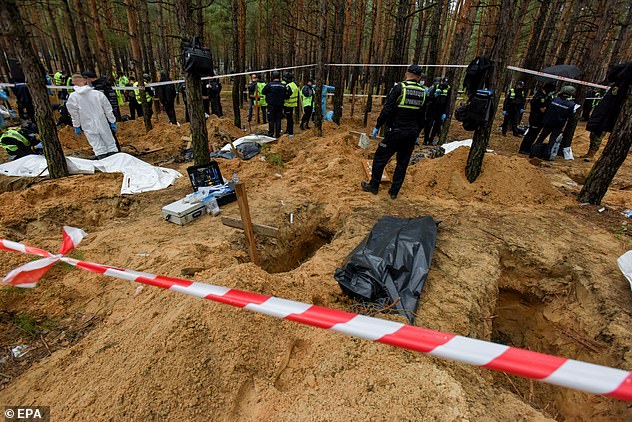 Ukraine’s southern command on Monday said strikes were also launched on a radar station near Kherson and on a pontoon crossing near Nova Kakhovka east of Kherson, where a Ukrainian counter-offensive has focused on taking out bridges across the Dnipro and Inhulets Rivers.

On Saturday, Zelensky said authorities had found a mass grave containing the bodies of 17 soldiers in Izium, some of which he said bore signs of torture.

Izium residents have been searching for dead relatives at a forest grave site where workers began exhuming bodies last week. 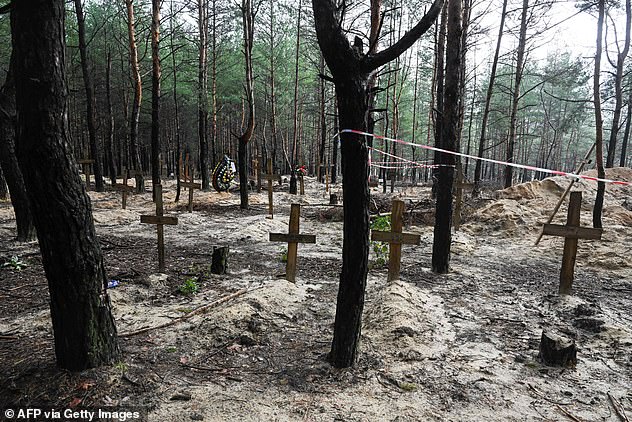 Flimsy wooden crosses are seen at a burial site in a forest on the outskirts of Izyum, on September 17, 2022 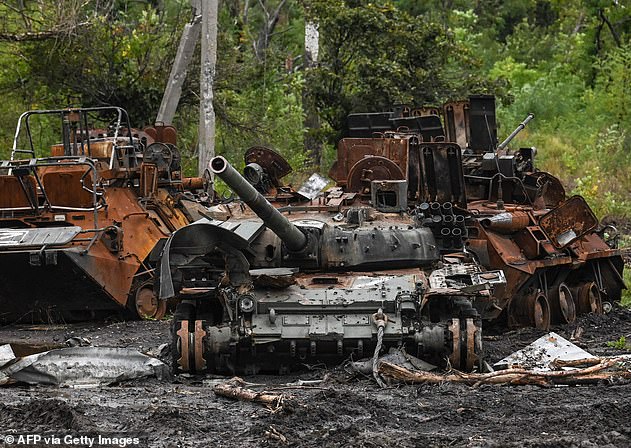 This photograph taken on September 14, 2022 shows a destroyed Russian tank and armoured personnel carriers on the outskirts of Izyum, Kharkiv Region, eastern Ukraine

Ukrainian officials said last week they had found 440 bodies in woods near Izium. They said most of the dead were civilians and the causes of death had not been established.

The Kremlin has not commented on the discovery of the graves, but in the past Moscow has repeatedly denied deliberately attacking civilians or committing atrocities.

In Kozacha Lopan, a village some 30 miles north of Kharkiv and close to the Russian border, a Reuters reporter was taken to a squalid cellar with rooms fitted with iron bars which officials said had served as a makeshift prison during the occupation.

District Mayor Vyacheslav Zadorenko said the rooms had been used as a ‘torture cellar’ to detain civilians.

Reuters was unable to verify those accounts.