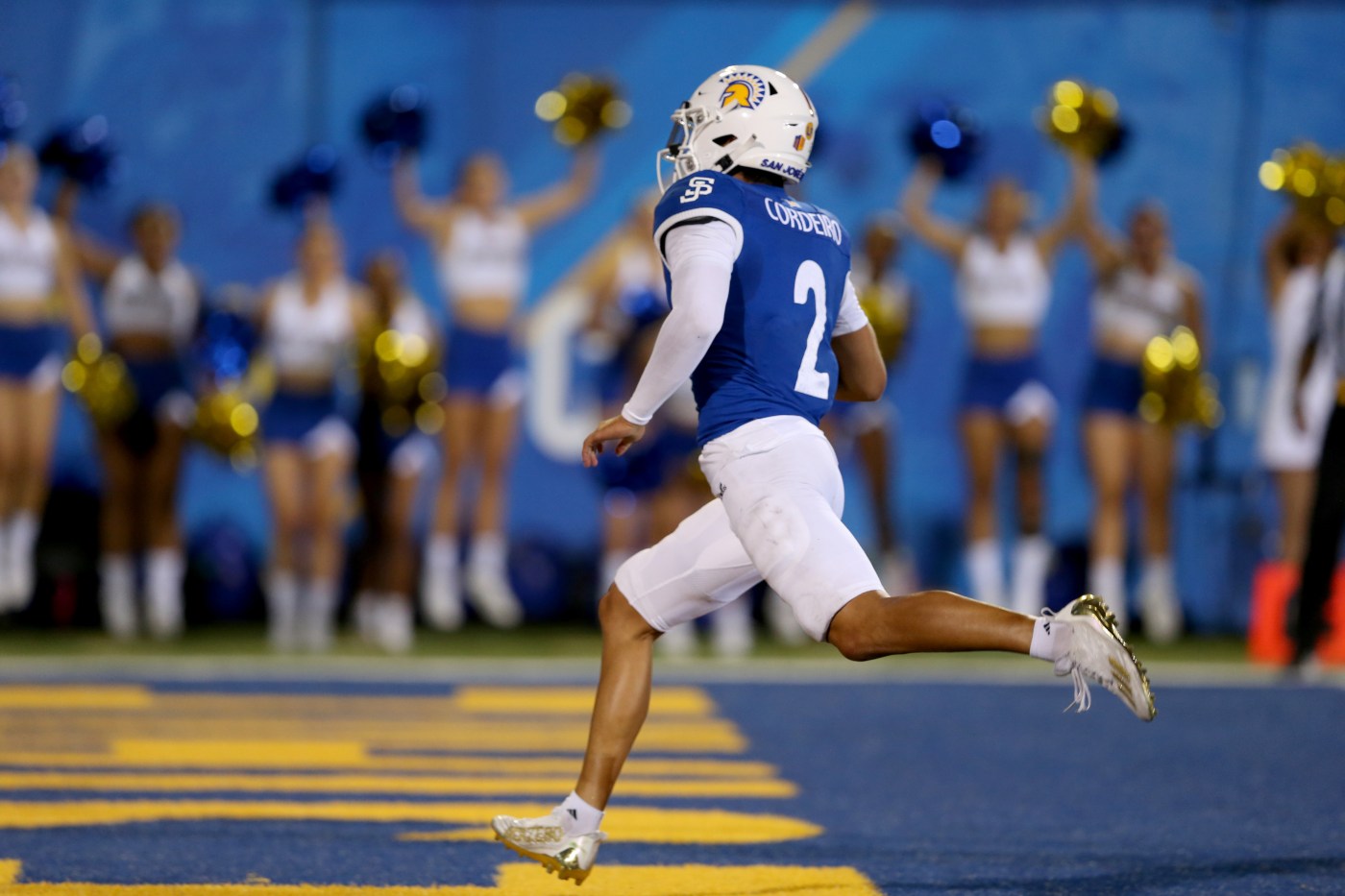 SAN JOSE — It truly was a game that San Jose State did not deserve to win. But thanks to their defense forcing three turnovers and a late rushing touchdown from transfer quarterback Chevan Cordeiro, the Spartans escaped Thursday night with a 21-17 win over FCS Portland State.

In front of 16, 291 fans at CEFCU Stadium, it looked like San Jose State was going to suffer its first loss to an FCS program since 2018. Two drives that started inside Viking territory stalled late in the fourth quarter, and a third looked like it could, too.

But in his first start since transferring from Hawaii, Cordeiro took a third down play from the 2-yard line to his left, then scrambled to the right and through contact to plow his way into the end zone for his second rushing touchdown of the game.

It capped off a physically brutal debut for Cordeiro, who was battered all night behind an inexperienced Spartan offensive line. San Jose State started three underclassmen — two sophomores and a freshman alongside two seniors — and the Vikings feasted, sacking Cordeiro seven times.

Because the NCAA counts sacks as negative rushing yards for quarterbacks, Cordeiro finished with 14 rushes for one yard and two touchdowns. The Spartans scored their other touchdown on Cordeiro’s 1-yard pass to tight end Sam Olson in the second quarter.

San Jose State had two chances to cash in on turnovers inside the Portland State 30-yard line late in the fourth quarter. Portland State muffed a punt that the Spartans recovered at the 29-yard line, but after a three-and-out, sophomore kicker Taren Schive missed his first-ever collegiate kick wide to the right from 30 yards out with seven minutes left.

Two plays later, senior linebacker Jordan Cobbs intercepted a pass at the Vikings 23-yard line. San Jose State drove to the 1-yard line and had two plays to score, but Cordeiro’s scramble attempt was stopped, then his fourth down play-action pass was broken up.

After forcing a three-and-out, the Spartans had 2:25 to drive 32 yards without any timeouts. Three Vikings penalties (two pass interference, one facemask) helped the Spartans move the ball to the 2-yard line, where Cordeiro threw two incompletions into tight coverage. It was on third down that he scrambled for the game-winning score.

The Spartans led 14-7 at halftime, and they could have easily been trailing, as Portland State had two drives into the red zone that result in no points. Cornerback Kenyon Reed made a diving interception to kill one drive at the 11-yard line, and a goal-line stop as the clock expired kept the Vikings from tying the score at the half.

Portland State significantly outgained San Jose State on the night (395 yards on 72 plays for the Vikings, 289 yards on 59 plays for the Spartans) and controlled the ball for nearly two-thirds of the game (Time of possession: 37:48 for Portland State, 22:12 for San Jose State). But the two missed chances to score in the redzone in the first half came back to be a big difference for PSU.

San Jose State will head deep into the South to take on Auburn next Saturday at 4:30 p.m. on ESPNU.