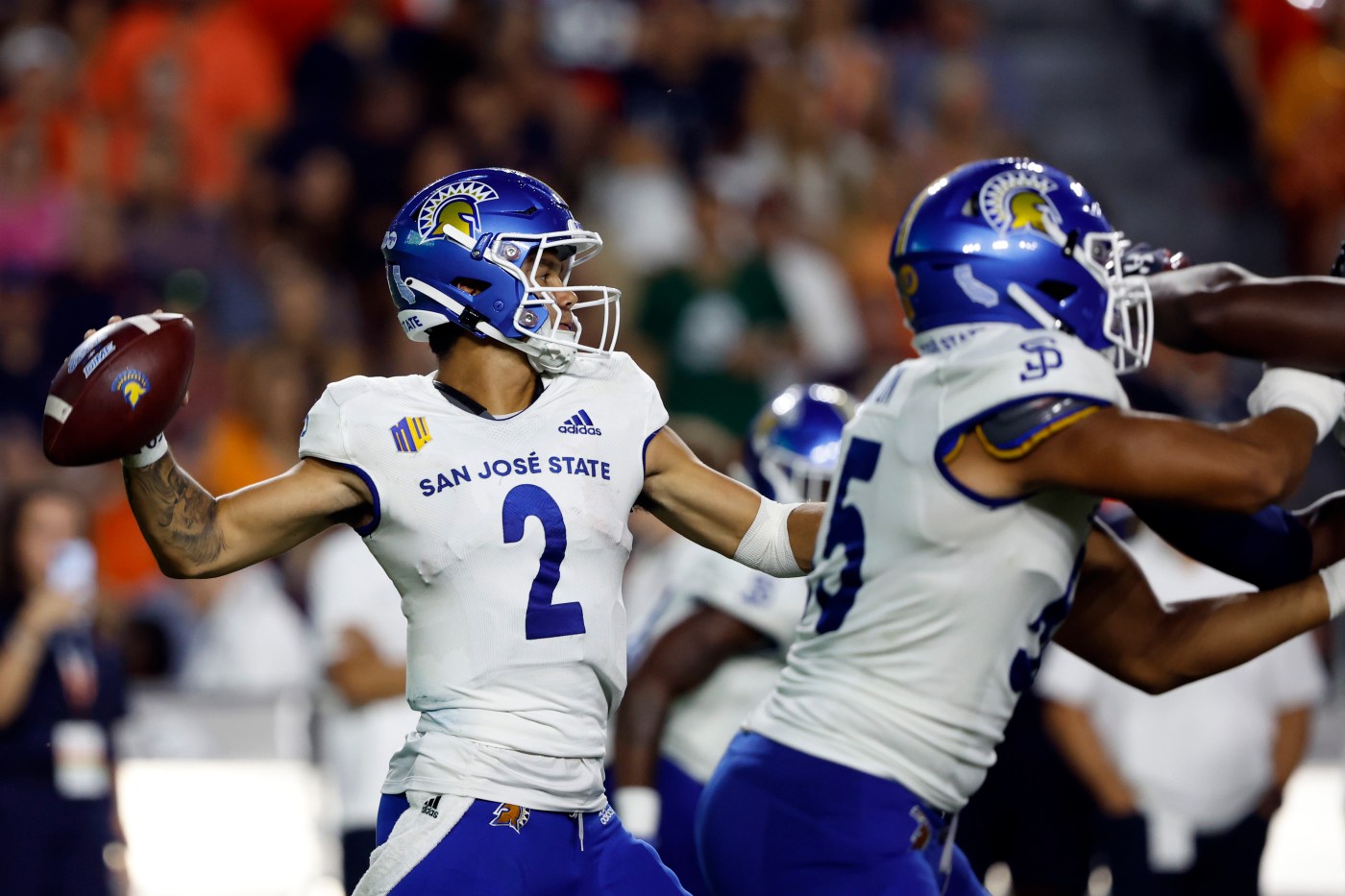 Chevan Cordeiro isn’t fazed much playing 7,000 feet up in the air. In fact, he’s thrived in the altitude at War Memorial Stadium in Laramie, Wyoming.

It’s where he made his impressive college debut in 2018 with the University of Hawaii and, on Saturday, returned as an evolved quarterback with San Jose State equipped with a rifle arm and a receiving corps worth watching.

The Spartans beat the Wyoming Cowboys 33-16 to open conference play, moving to 3-1 — their only loss coming against Auburn in Week 2. The Spartans’ might just keep winning if their offense keeps churning out big plays and wearing down defenses.

Cordeiro’s performance alone could win a few football games. He completed 21 of 37 passing attempts for 314 yards and rushed for two touchdowns. Heading into Saturday’s game, he was averaging 274 passing yards per game in three games this year.

“Chev, he’s a baller,” wide receiver Elijah Cooks said. “Having a quarterback who can do all the things he does, it makes our offense ten times better. Having him be able to run, throw the ball the way he throws the ball. He’s a true leader out of the field. I’ll go to Chev on the sideline and tell him what’s working and he trusts me. That trust is huge for a quarterback and receiver and I’m so grateful for that.”

Cordeiro is worth watching on his own, but the chemistry between him and receivers like Cooks, Charles Ross and Justin Lockhart turns offensive possessions into a show. Saturday, Cordeiro had no problem finding his receivers in wide open space and in favorable man coverage match-ups against the Cowboys’ secondary.

In a first quarter drive, Cordeiro found Cooks for a 23-yard pass on third-and-21. A Wyoming hands-to-face penalty cut the distance to goal in half. But the Spartans couldn’t find the end zone, and their 26-yard field goal attempt missed wide left.

A few minutes later, the Spartans stopped Wyoming on a fourth-and-one play, a defensive stop made easier because the Cowboys started the play in shotgun formation. Cordeiro found a wide-open Cooks in the middle of the field for a 52-yard catch to put them in the red zone for a third time. Skylar Loving-Black caught an eight-yard pass for his first career touchdown and the Spartans’ first touchdown of the game to make it 12-3.

They’d found their rhythm. The Spartans extended their lead with a drive to end the half, ending with Cordeiro’s one-yard touchdown run to make it 19-10 at the break.

After the half and still in rhythm, Cordeiro found Cooks immediately for a 26-yard pass to put them a half-yard away from the end zone. Cordeiro ran out to the slot and running back Kairee Robinson scored to make it 26-10.

Cooks, a 6-foot-4 graduate student, finished with a season-high 177 yards on eight receptions. Coaches tell him to use his basketball background to go up and get the ball.

“Nobody is going to be as big as me out there,” Cooks said. “I go out there and get every ball I can rebound, I should win 100 percent of the time and that’s my mentality I grew up with. Basketball has been a big help to my football career.”

Ross finished with 66 yards on six receptions and Lockhart had 27 yards on two receptions.

The run game opened up more in the second half as Wyoming’s defense wore down. Kairee Robinson ran for 102 yards, including a rushing touchdown.

Defense and special teams set the tone before the Spartans found offensive rhythm. Early in the first quarter, Travis Benham’s punt landed within the one-yard line and the defense made it pay by blowing up Wyoming’s run play in the end zone for a safety.

Defensive lineman Cade Hall opened that second half with his first career interception on cornerback Kenyon Reed’s play to break up a pass.

The defense also suffered a loss when defensive back Noah Wright was taken off the field in a stretcher after appearing to hurt himself trying to stop a run. Wright held up up two fingers on both hands, signaling to his teammates he was OK, before he got onto the ambulance.

head coach Brent Brennan couldn’t specify the nature of the injury, but said Wright is expected to travel with the team back to San Jose. A good sign.

After the injury delay, Wyoming quarterback Andrew Beasely broke free for a 61-yard run on third down and found Parker Christensen for 13 yard touchdown. A failed two point conversion cut the Spartans’ lead to 10. But the Spartans held Wyoming scoreless the rest of the way.

“The way they responded had more to do with them than it had to do with me,” Brennan said. “If we’re going to be the team we want to be we have to be led by the guys on the field. They did a good job of really coming back together and regrouping and digging in and finishing.”

The Spartans host undefeated UNLV (3-0), off a win against New Mexico, next next Friday, Oct. 7 at CEFCU Stadium. The Rebels are coached by Marcus Arroyo, former Spartans quarterback from 1998 to 2002 and is close with Brennan.

“I love it when I’m coaching a game and I look across the field and the guy on the other sideline is one of those people that I know is one of the good guys in college football. A good guy for the game and a good guy for young men,” Brennan said. “I’ll be excited to see him Friday, but I don’t think we’ll talk a lot between now and then.”