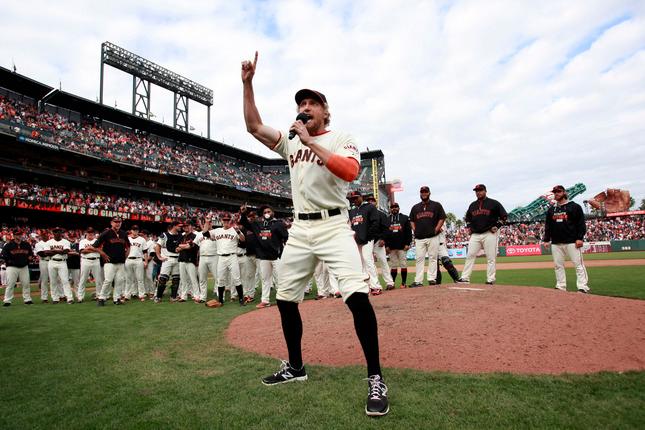 The Giants on Monday announced plans to honor one of the most beloved and eccentric parts of their World Series dynasty.

Outfielder Hunter Pence will receive a plaque on the team’s Wall of Fame on Sept. 17 and, in a new twist, it will be unveiled during an on-field ceremony before the Giants’ game against the Dodgers that night.

Pence, currently a color commentator for Apple TV+, will become the 55th member of the organization recognized with the honor and the first to receive his plaque on the field before a game.

“I’m truly humbled by this honor,” Pence said in a statement. “To be included among people who I consider legends of the organization is surreal and I’m overwhelmed with gratitude to even be considered. The Giants organization and the San Francisco community are my family. This honor wouldn’t be possible if not for the love, support and dedication I’ve shared with them. I can’t thank the club, my teammates and the fans enough for the unforgettable memories.”

Until 2019, the honor was reserved for players who spent nine seasons in San Francisco or five seasons with at least one All-Star selection, or won three World Series with the Giants. But it has since been expanded to include others “who have made a remarkable impact on the franchise.”

“The Giants Wall of Fame is a place where we permanently honor both players and individuals who have made extraordinary contributions to the organization and Hunter is definitely one of those players,” Giants president and CEO Larry Baer said in a statement. “His pivotal role in our two World Series Championships will forever be remembered by our fans and his connection to this great city is a special one.”

In an ode to Pence’s famous “Yes! Yes! Yes” speech during the 2014 postseason, when Pence hit safely in 15 of his 17 games, the Giants will also hand out a pair of foam fingers to the first 20,000 fans on the day of the ceremony.