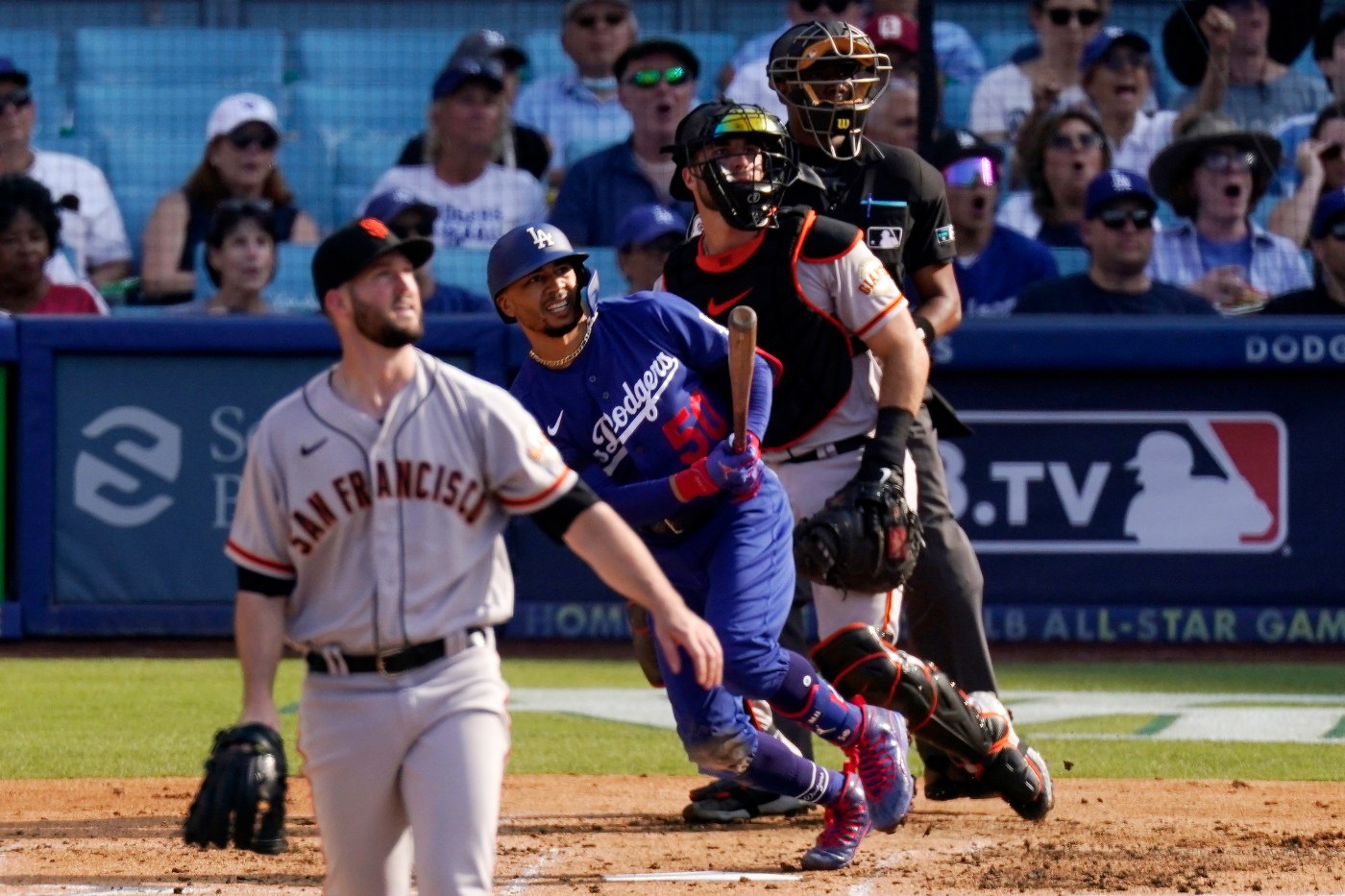 Up and down the Dodgers’ lineup, there is no respite. It was their No. 8 hitter — a former MVP, no less — who delivered the deciding blow on Friday to saddle Webb with a no-decision. But let’s focus on the top.

No. 1: Mookie Betts, an MVP and six-time All-Star, acquired via trade.

No. 2: Trea Turner, a two-time All-Star and a batting champion, acquired via trade.

That’s two superstars who did superstar things Saturday, less than 24 hours after Webb’s postgame assessment, to send the mix-and-match Giants to their third straight loss here at Dodger Stadium. Their back-to-back homers off Alex Wood in the third inning looked to be decisive until San Francisco rallied off Reyes Moronta and David Price in the ninth inning.

So in the end, it was the Dodgers’ other marquee addition that did in the Giants, as Freddie Freeman’s seventh-inning solo shot provided the necessary insurance to hand San Francisco a 4-2 loss.

“It doesn’t really give up, one through nine. They’ve got a bunch of superstars,” echoed Wood, who was out of the game after spending 97 pitches to make it through four-plus innings. “It’s what they’re built to do: see a lot of pitches, grind guys down. And when they get a mistake, they make you pay.”

Austin Slater, the Giants’ hottest hitter this month, came to plate as the potential go-ahead run but was called out on strikes to end the game. Slater and manager Gabe Kapler both believed the borderline pitch was out of the strike zone.

“There’s nobody we’d rather have up in that spot,” Kapler said. “I never make a big deal out of umpires’ calls; I won’t now. But I will say, that goes our way and we could win that game.”

Only a few miles from Hollywood’s star-studded Walk of Fame (and a few days since this site played host to this year’s All-Star Game), it has been more apparent than ever this series that these Giants don’t have any. Betts stole the show Thursday night with a tiebreaking homer and a dazzling game-ending catch. On Friday, it fell on Cody Bellinger, the 2019 NL MVP who is a regular presence at the bottom of the Dodgers’ order, now that Betts (traded from Boston), Turner (traded from Washington) and Freddie Freeman (signed this offseason) provide most of the firepower.

Of the Giants’ supposed stars, Brandon Belt was yanked for a pinch-hitter in the game’s biggest moment Friday. Evan Longoria appears to be headed for his third stint on the injured list after straining his right hamstring Saturday running out a double play, and Brandon Crawford (left knee inflammation) is already there. Joc Pederson, who sat Saturday with the lefty Urías pitching, is stuck in his own 7-for-50 (.140) slump since the calendar turned to July.

“Without question, it might be the most challenging 1 through 4 in the game,” Kapler said of the Dodgers’ order. “At the same time, I like the guys we have at the top of our lineup. … I’m appreciative for the group that we have and excited that we get to get the best out of them and mix and match our way through this. The puzzle is challenging but it’s also stimulating and for that reason I appreciate it.”

Paging Juan Soto. Aaron Judge? A reincarnation of prime-age Barry Bonds? Good for Buster Posey that he’s enjoying retirement; not so much for the Giants.

At least Slater has played like a superstar this month, raising his average in July to .440 (22-for-50) with a double to lead off the game and a line-drive single the other way in the third inning — the Giants’ only hits off Dodgers starter Julio Urías. He reached base for a third time, with a walk in the fifth, but was left stranded each time.

“Sometimes it’s not worth being too hard on yourself and evaluate what you’re doing well,” Slater said. “I think for the most part we’re playing pretty good ball. Just coming up a little bit short at the end.”

If the Giants are going to contend with the Dodgers (who, by the way, have Betts for the next 12 years) or, for that matter, their division rivals even further south who boast the likes of Manny Machado, it has been made clear this season that merely winning the platoon matchups — often at the expense of defense — won’t cut it.

The Giants have one more game on tap here Sunday — Alex Cobb vs. Clayton Kershaw — but have already guaranteed they will leave Los Angeles further back in the division than any point in the Gabe Kapler era. After Saturday’s loss, they fell 15.5 games back of the Dodgers.

With the Aug. 2 trade deadline a little more than a week away, Ken Rosenthal reported on the FOX broadcast Saturday that the Giants were unlikely to be major buyers or sellers, echoing president of baseball operations Farhan Zaidi’s comments before the All-Star break. (“What they would like to do is find a defender,” Rosenthal said. “Somebody who can play center field or shortstop and make them better overall by putting players on the team in better spots.”)

Another area that separates the Giants from the Dodgers: organizational depth. The Dodgers were able to land Betts, Turner and Max Scherzer within a year and a half of each other without impacting their pipeline of homegrown talent.

The Washington Nationals are reportedly listening to offers for Soto, their 23-year-old superstar, but the package of prospects that he will command could bankrupt San Francisco’s farm system. Might then Judge, the Yankees’ 30-year-old slugger (and Northern California native), make more sense when and if he reaches free agency this offseason?

The upside of the Giants’ roster strategy, in addition to the expiring contracts of Longoria and Belt after this season and Crawford after next year, is that they should have ample resources.

Through the first three games of this series, the Giants have scored one run against Dodgers starters. That should come as no surprise against a team whose rotation leads MLB in ERA by 0.41 points. But with one run and seven hits over 17 innings this series (a 0.53 ERA), the Dodgers have outperformed even their league-leading mark of 2.71.

“They have elite starters,” Slater said. “I think they’ve been executing really well. I don’t know if that’s a knock on our offense as much as a head nod to the starters that they have.”

The Giants (3.47) rank fifth — behind only the Dodgers in the NL — but got only four-plus innings out of Alex Wood on Saturday.

Before Betts’ third-inning home run, he worked a 12-pitch at-bat to lead off the bottom of the first. Max Muncy saw 10 pitches before striking out in the second. By the second batter of the fifth inning, Wood was out of the game after spending 97 pitches.

“I thought I threw pretty good,” Wood said. “They just grinded me down to the nub.”

One bright spot came in the second inning, when Wood struck out the side with three called strike threes. He extended that streak to five by striking out the first two batters of the third, but that was immediately followed by Betts and Turner’s back-to-back homers.

The two solo shots in the third inning gave the Dodgers their 15th and 16th runs this series scored with two outs. In fact, they didn’t score a run with less than two outs until getting their fourth and final run Saturday (18 this series) in the seventh inning.

John Brebbia achieved the regrettable feat of allowing the first run with less than two outs, serving up a 2-2 fastball to Freeman that he blasted over the wall in right-center field to extend the Dodgers’ lead to 4-0. Gavin Lux gave them their 17th two-out RBI this series with a double down the right-field line off Jarlín García in the sixth that made it 3-0.