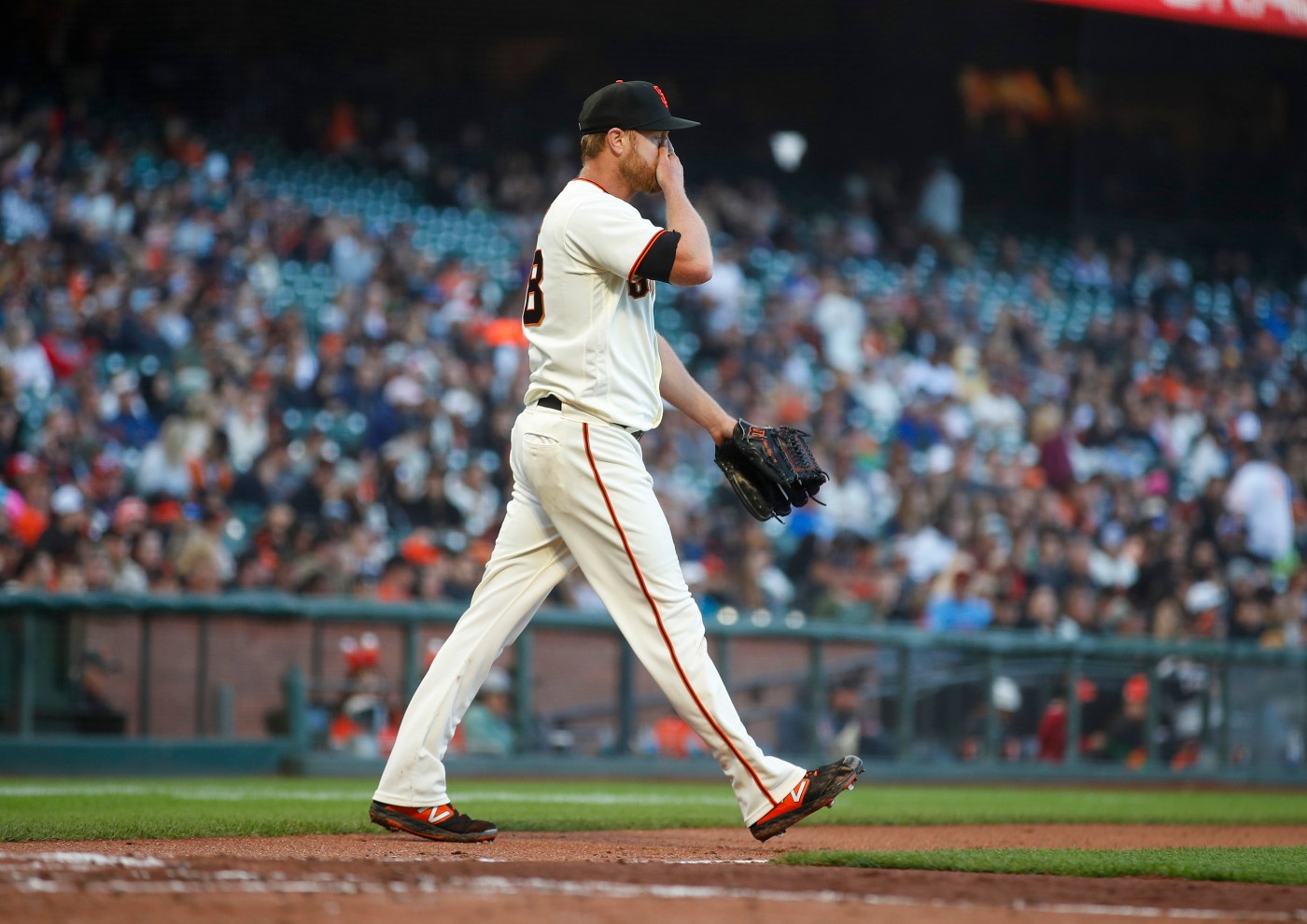 SAN FRANCISCO — On the other side of this home stand is the All-Star break. If all goes well, the Giants could enter it a resurgent bunch, recovered from their recent skid and well within reach of the playoffs. The other way? Well, it should make Farhan Zaidi’s options at the Aug. 2 trade deadline clearer, at least.

After breathing life into their season and staving off a losing record with a pair of wins to finish their trip through Arizona and San Diego, the Giants weren’t able to extend two wins into three Monday against the D-backs. They lost, 4-3, starting this final stretch of seven games before the break on the wrong foot.

Three runs off Alex Cobb in the third inning and an all-important insurance run in the eighth were all that was needed for Arizona to beat San Francisco for the third time in four tries this season — all in the past week — after the Giants won 17 of their 19 meetings last season.

After being silenced all night, the Giants came within inches of tying the game in the eighth, after Arizona extended its advantage in the top half. They had already scored two to pull within 4-3 when Brandon Crawford stepped in with the bases loaded and one out, the tying run 90 feet away. But Crawford’s foot touched the first base bag a split second after the throw from shortstop Geraldo Perdomo for an inning-ending double play that was held up upon video review.

The night started on an inauspicious note, as Cobb threw four balls to the first batter he faced and allowed runners to advance as far as third in each of the first two innings. His troubles mounted in the third, allowing four hits and a walk while Arizona brought eight men to the plate during its three-run rally.

The D-backs were aided by an error by Luis González when a routine hit rolled under his glove in right, allowing runners to advance to second and third, setting up a two-RBI single from Daulton Varsho.

After the three-run third, Cobb settled down to complete six innings on a season-high 100 pitches and didn’t allow another hit, securing his sixth straight start with three or fewer earned runs. Since returning from the injured list on June 19, he has a 2.84 ERA.

Brandon Belt delivered three of the Giants’ seven hits, but they struggled to muster anything more off D-backs starter Merrill Kelly, who has tossed a combined 13⅓ innings while limiting the Giants to four runs and seven hits his past two starts.

A couple of nights ago, after Belt launched a pinch-hit home run that didn’t affect the outcome, Kapler pondered, “maybe this is the home run that sets him on track.” The homer was Belt’s first in three weeks and only his second since returning from the injured list, while recording seven hits in 47 at-bats over that span (a .149/.298/.234 batting line in 19 games).

Including that home run, Belt has reached base in seven of his past eight trips to the plate. If his first hit Monday night felt cheap — a pop up that fell in between four D-backs in shallow left field — the karma police evened the score in the sixth, when Belt launched a first-pitch fastball 389 feet to right center but had to settle for a double.

Belt shook his head as he jogged into second, after the ball bounced off the padding just below the brick wall of the arcade. It would have been a home run in all the other 29 ballparks. Followed by a groundout and a strikeout, Belt’s would-be homer went down as just another missed opportunity.

After exploding for a dozen runs and 17 hits Sunday in their series finale in San Diego, the Giants sputtered their way to only one run on five hits for the first seven innings on Monday. Until the eighth, Belt’s double was the only time they advanced a runner past first base outside of their rally in the fourth, when they left González and David Villar stranded at first and second.

But LaMonte Wade Jr. led off the eighth with a walk that chased Kelly from the game, and Darin Ruf followed by beating out an infield single while pinch-hitting for Joc Pederson. Wilmer Flores knocked home Wade with a double that careened off the bag at third base. Facing newly named All-Star Joe Mantiply, a left-hander, Austin Slater pinch-hit for Belt and drove in Ruf on a ground out, but back-to-back walks to González and Villar only served to set up Crawford’s inning-ending double play.

Wade stepped up in a decidedly late-night situation the following inning, representing the winning run after Mike Yastrzemski led off the ninth with a single, but he popped out to third and Darin Ruf struck out to end it. If there was any doubt left, it is no longer 2021.

Flores, who came up about the length of the warning track shy of his fourth homer in three games in his first at-bat, ignited the Giants’ only scoring rally with a one-out double in the fourth. Belt advanced him to third with his second hit of the game, and González allowed him to score by beating out a double-play ball that would’ve ended the inning.

With six games to go until the All-Star break, the Giants are back to a game over .500, at 42-41. They have two more against Arizona before hosting the NL Central-leading Brewers for four games to close the first half.