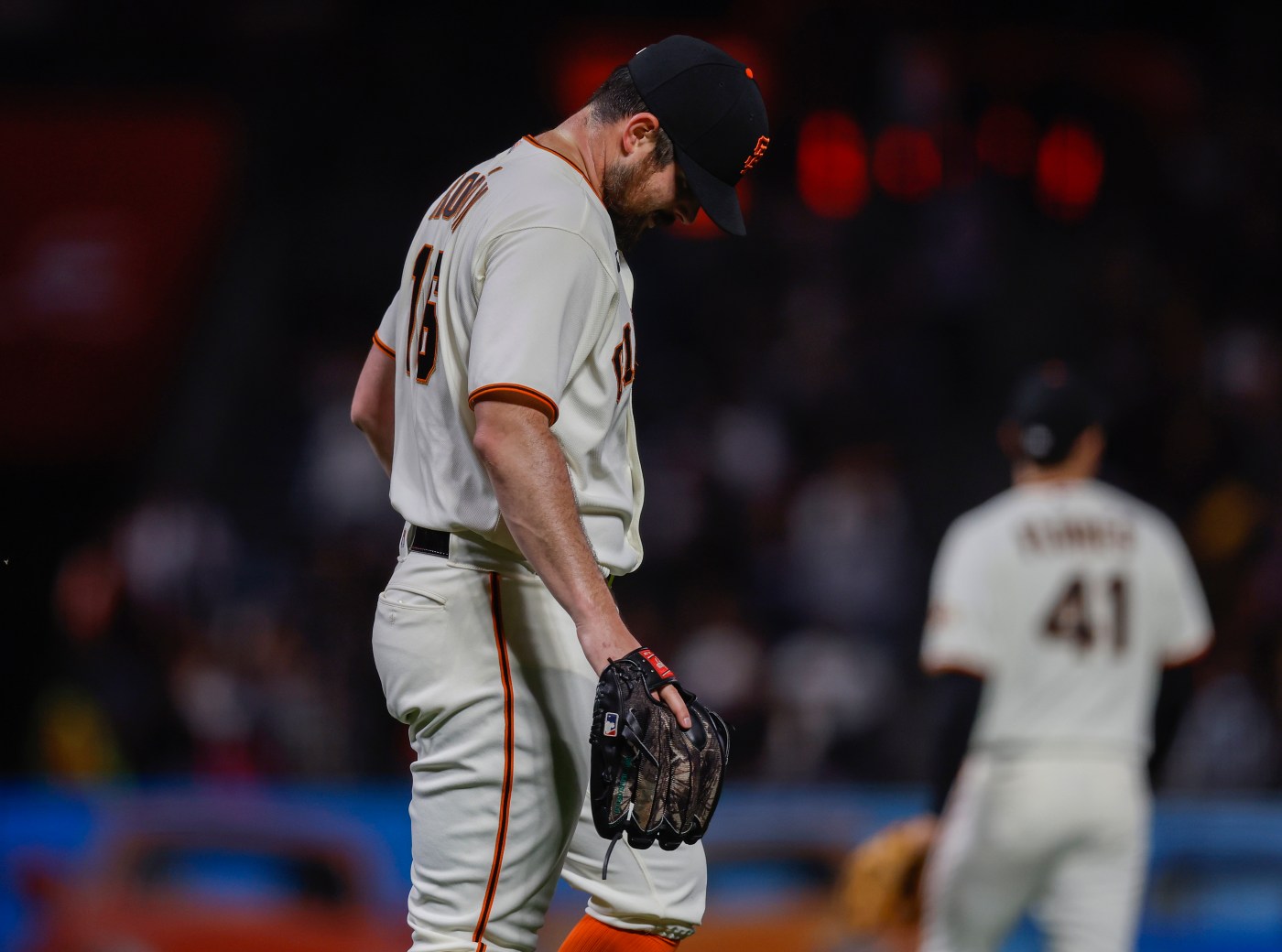 SAN FRANCISCO — The opening game of the Giants’ home stand was interrupted for nearly an hour by separate stoppages Monday night, but not even lighting malfunctions or injured umpires could delay the inevitable.

Faced with a chance to gain ground on the team they’re attempting to chase down for the final National League wild card spot, the Giants’ playoff chances only took another blow, with a 6-5 loss to the Padres that started before either stoppage of play and only continued once it resumed for good.

In his shortest start of the second half, Carlos Rodón needed 94 pitches to labor through four innings, walking twice as many batters as he struck out, and left the game in a 5-0 hole. By the time San Diego reliever Nick Martinez recorded the final out, the Giants were further out of playoff position (8.5 games) and further below .500 (61-66) than any point this season.

Joc Pederson provided the Giants’ only offense for most of the night with a two-run homer in the fourth inning, then afterward squarely summed up the state of affairs at the corner of Third and King.

San Francisco mounted a threat in the eighth, with RBI singles from Austin Slater and J.D. Davis pulling the Giants within one run. The three runs equaled their total in any of the previous four losses on the skid they took into Monday night but proved to be too little and too late, extending the losing streak to five games.

Although San Diego improved to only 11-13 since the trade deadline, the Padres’ trio of acquisitions plated three runs off Rodón before the Giants came to bat, which had to wait an extra 10 minutes because of the first of two stoppages. Brandon Drury’s two-run shot to left capped the three-run rally, driving home Josh Bell, who singled in Juan Soto after he reached on the first of four free passes issued by Rodón.

Play was delayed for the first time when home plate umpire Marvin Hudson slipped and fell while tracking a foul pop fly from Giants leadoff man Tommy La Stella. Hudson, who was later diagnosed with right knee discomfort, was replaced behind home plate by second base ump John Tumpane, and play carried on with a three-man crew.

It took another 40 minutes for play to resume between the third and fourth innings when the lights at Oracle Park failed to properly illuminate the field once the sun set on the clear, 64-degree day.

Despite the lengthy delay, both starting pitchers remained in the game when play resumed. However, after another two-run rally in the fourth — started with another walk and ended with a two-single from No. 9 hitter Austin Nola — Rodón’s night was done, matching his second-shortest outing of the season (four innings) and his second-most runs allowed (five).

“It’s just one of those things that you deal with,” Rodón said, downplaying the effects of the delay. “It was odd, right? Poor guy behind home plate tonight, who knows what he did to his knee, but hopefully he’s all right. … Then the light thing. It was kind of an odd game today, right? A little different.”

“That was a weird game today,” echoed Pederson. “What are you going to do?”

Pederson’s home run got the Giants on the board in bottom of the fourth, traveling 420 feet to clear triples alley in right center and driving home LaMonte Wade Jr. after a leadoff single. The homer was Pederson’s first at Oracle Park since June 25 and snapped a team-wide drought that had lasted since the sixth inning of Tuesday’s win in Detroit — a span of 172 plate appearances.

Pederson, who has never missed the postseason in his seven previous seasons, has turned things around after a midseason slump and is playing like someone who doesn’t want to make October plans.

Since snapping his own homerless streak last Friday in Colorado, Pederson is 8-for-23 (.348) with a team-leading 1.037 OPS but struck out in his final two at-bats Monday, including one two-strike bunt that went foul.

“Baseball’s a tough game. I’m seeing the ball pretty well right now,” Pederson said. “I’ve been very fortunate to (make the playoffs) every year I’ve been in the big leagues. Obviously losing is very frustrating. We’re not trying to lose. … Confidence is a big thing. Losing doesn’t help your confidence.”

As a team, the Giants’ five runs matched their total over their three-game sweep in Minnesota and marked only the third time in their past 12 games that they pushed more than three runners across home plate. Over the 12-game skid, the Giants are 3-9 and have combined for a team batting average of .203, the second-worst mark in the majors.

Only with their three-run rally in the eighth — ignited by Wade’s third hit of the night, Brandon Crawford’s second hit and a walk to Thairo Estrada, putting him on base for the fourth time — did their average rise over the Mendoza line.

“I thought it was a better offensive performance, but there’s no question the main issue for us is we haven’t been as good in the (strike) zone,” manager Gabe Kapler said. “I think earlier in the season, we were much better at driving balls in the zone.”

After losing the last game of their series in San Diego earlier this month, the Giants fell 7.5 games back for the first time this season. Since then, San Diego had gone 7-8 in 15 games leading up to Monday, yet San Francisco entered this series exactly where it was nearly three weeks ago, only with 36 games to make up the gap, instead of more than 50.

After Monday’s loss, the Giants are one game further back with one fewer to left to play.