SF Giants rally against Hader, walked off by Machado in loss to Padres 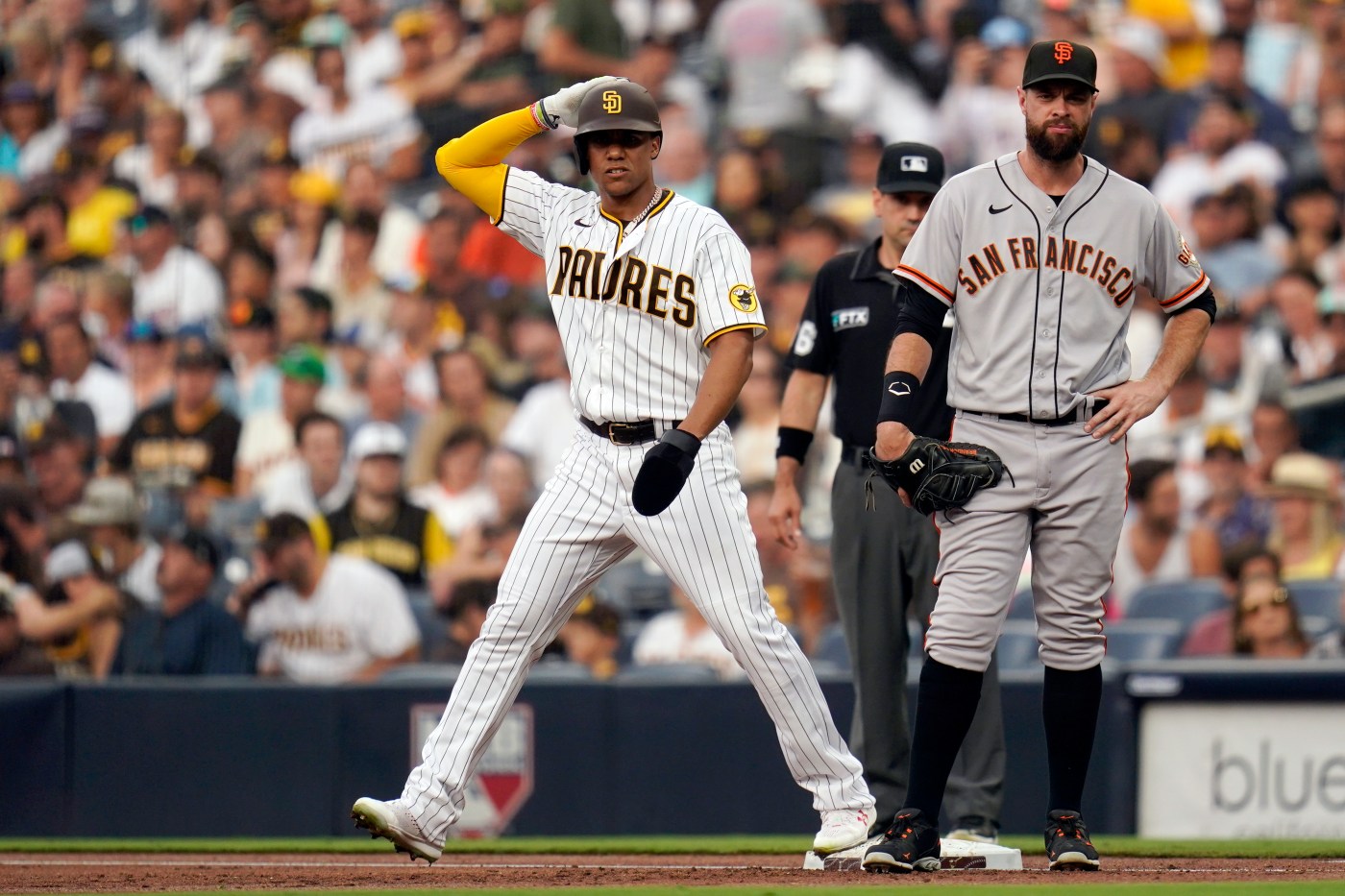 SAN DIEGO — The Giants rallied, again, against one of the most feared closers in the game to tie Tuesday night’s meeting with the Padres in the ninth after coming up empty for seven straight innings. Manny Machado made it all for naught only an inning later.

Machado launched a three-run walk-off home run to the upper deck in left field off Tyler Rogers to send the Giants to a 7-4 loss, negating their three-run rally off San Diego closer Josh Hader the inning prior.

It was Machado, with his fourth home run against San Francisco this season, who delivered the deciding blow. But it was Machado’s newest partner in the Padres’ order, Juan Soto, who made the Giants pay for the first eight innings.

Entering Tuesday night, the Padres had gone 25 innings since the they last scraped a run against Giants pitching, and Alex Cobb was doing a fine job of extending that streak through three innings.

It took only two games for the Giants to feel the impact of losing out on the marquee mover at the trade deadline and, more consequentially, having the superstar slugger land with the team they are attempting to chase down in the National wild card race. Any gains made with Monday night’s win to open the series were erased in Tuesday’s walk-off loss, which sent the Giants back to a 6.5-game deficit.

Soto gave the Padres their first hit and tied the game with a rocket to right field in the fourth, then doubled and scored the go-ahead run in the sixth. His homer just might be the rare case where Cobb wished home plate umpire Jeremy Riggs’ was a little less favorable.

Soto started strutting to first base after Cobb fired a high fastball on a 3-1 count that Riggs called strike two. Cobb attacked him above the letters again on the 3-2 pitch, and Soto sent the 96 mph sinker whistling at 107.9 mph off the scoreboard in right field.

Cobb had recorded nine outs without allowing a hit before Soto’s blast, but he would get only six more while surrendering five hits — and two more runs — after it. Soto doubled down the right-field line for the first of three straight hits to lead off the sixth that spelled the end of Cobb’s day and scored on Josh Bell’s single with the Giants’ infield playing in.

Manny Machado, who followed Soto with a single, scored on Jake Cronenworth’s sac fly to widen the gap to 3-1, and the Padres tacked on one more in the eighth off Dominic Leone.

Cobb was left still searching for his first win since May 17, despite holding a 3.59 ERA — and an even lower FIP (fielding independent pitching) — over that span. He struck out seven Tuesday night, including three two-strike sinkers that perfectly painted the black for called third strikes.

LaMonte Wade Jr. gave the Giants a 1-0 lead on the third batter of the game with a homer that just snuck over Soto’s glove in right field — his second in his past two starts — but they put runners on base in all but two of the following innings and failed to capitalize enough on any of the ensuing chances.

Their best shot at a comeback came in the ninth, facing the same closer they homered against three times while scoring six runs in a walk-off win over the Brewers last month. They rallied for three runs to tie the game in the ninth against an erratic Hader, who issued three walks and hit a batter before surrendering a game-tying base knock to Evan Longoria on his 37th pitch of the inning.

In 40 appearances between San Diego and Milwaukee this season, Hader has allowed 19 runs. Nine of them have come in two outings against the Giants, which are also two of his three blown saves this season.

After winning Monday night on a perfectly executed relay, the Giants got a home-run-robbing catch from Mike Yastrzemski, a slick snag from Thairo Estrada and a sliding grab from Joc Pederson.

Yastrzemski’s leaping catch at the wall in center field robbed Brandon Drury of a second San Diego home run in the fourth. Estrada fell to the ground and threw from his behind for the final out of the fifth after the Padres put runners at the corners. And Pederson robbed Jurickson Profar of a hit to end the third by charging hard and sliding on a shallow pop near the foul line in left field.