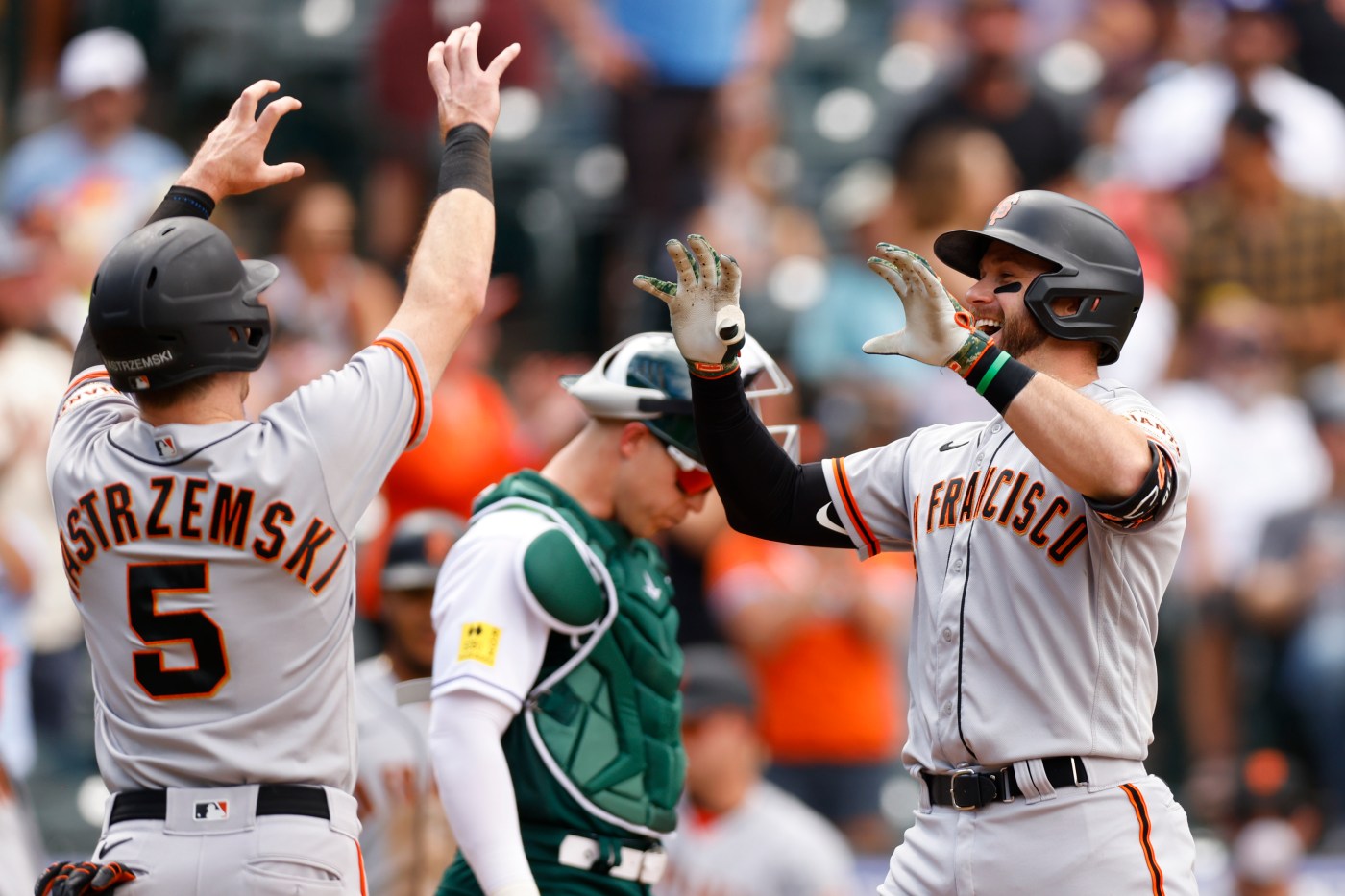 DENVER — Giants manager Gabe Kapler began his Sunday by walking over to the tarp here in foul territory down the left-field line, taking a seat, crossing his legs and proceeding to sign autographs for just about anyone who asked.

The imagery of a manager so at peace, only a few hours before first pitch, is rarely seen in a major-league ballpark. Other parts of Kapler’s morning included tossing a football around in the outfield and playing catch with Logan Webb.

It only got stranger as game time got closer: an entire string section set up in left field (to perform the national anthem), two real-life donkeys made friends behind home plate (for no clear reason), and few more humans pretending to be animals plodded around the warning track. (It was mascot day, after all.)

But perhaps the oddest thing of all came in extra innings during San Francisco’s series finale here against the Rockies: they got a hit with a runner in scoring position, and before the 10th inning was over, did it again.

In one inning, the Giants recorded as many hits with a man standing on second or third as they did over their entire four-game losing streak, which came to an end Sunday with a 9-8 win in 11 innings over the Rockies.

Thairo Estrada delivered a tie-breaking blow with a single up the middle in the top of the 10th, and Austin Wynns provided an insurance run with an RBI double a couple batters later — the Giants’ fifth hit of the day with runners in scoring position.

After the bullpen blew leads of 6-3 after seven innings and 8-6 after 10, Wilmer Flores’ sac fly to drive home Mike Yastrzemski in the 11th proved to be the decisive run.

The Giants had to do it in extras after Tyler Rogers and Jarlín García combined to allow three runs, including a game-tying, 462-foot homer from Randal Grichuk in the bottom of the eighth that almost let a strong showing by Jakob Junis and a tie-breaking grand slam from Evan Longoria go to waste. Dominic Leone’s high-wire act allowed the Giants to escape the bottom of the 10th after Alex Young coughed up two runs and the lead.

The Giants bullpen had shown signs of improvement after posting a 5.50 ERA in July, with two earned runs allowed over their past 18⅓ innings entering Sunday. But they were tagged for five runs in 5⅓ innings before Zack Littell — the second-to-last remaining reliever in the bullpen — shut the door in the 11th to earn his third career save.

The game ended on a call overturned by replay review, after the Giants challenged that Evan Longoria applied a tag on to Sam Hilliard at third on the receiving end of a throw from LaMonte Wade Jr. in right-field, ultimately finishing the back-and-forth marathon with a double play.

Longoria’s grand slam broke a 2-2 tie in the seventh inning and gave the Giants their third — and loudest — hit with runners in scoring position on Sunday. It was also his third knock of the game, finishing a triple away from the cycle and making a bare-handed snag at third base that turned a surefire hit into the first out of the bottom of the ninth.

As Longoria waited to step into the batter’s box in the top of the seventh, Rockies manager Bud Black had a lengthy conversation on the mound with starter Kyle Freeland and the rest of the Colorado infield. Freeland was at 99 pitches and had allowed a single to Yastrzemski, a double to Austin Slater and issued a walk to J.D. Davis. Two Rockies right-handers were warming up in the bullpen, but Black opted to let Freeland face Longoria.

Moments later, Freeland doubled over on the mound in despair as Longoria’s tie-breaking grand slam flew over the left field wall.

Entering Sunday’s game, the Giants were 2-for-25 (.080) with runners in scoring position over the course of their four losses and were batting .216 (29-for-134) in those prime scoring chances since the start of August.

After Longoria’s grand slam, Estrada’s 10th-inning single and an insurance run provided on a double from catcher Austin Wynns, the Giants finished Sunday 5-for-15 with runners in scoring position.

Brandon Crawford continued his hot hitting since returning from the injured list, slapping a second-inning single the other way that drove home Longoria and got the Giants on the board. Wynns followed with a second RBI single that drove home Estrada, who of course only reached thanks to another Sunday oddity.

Estrada lined a hard grounder to third baseman Ryan McMahon — so hard, apparently, that it snuck through the webbing of McMahon’s glove, and play was paused briefly while he had his leather attended to.

Yastrzemski’s seventh-inning single broke another drought, of the personal variety. It was his first hit since Aug. 12, a stretch of eight games and 29 at-bats, the longest hitless streak of his career that had lowered his batting average to .208 entering Sunday.

All that backed up an excellent outing from Junis, who had never pitched in the unique elements of Coors Field that can cause problems for so many hurlers. Two home runs amounted to the Rockies’ only damage off Junis, who allowed three earned runs, struck out six and didn’t issue a walk over 6⅔ innings.

It was the second straight strong showing from the 29-year-old right-hander after struggling in his first five games back from a monthlong stint on the injured list with a strained hamstring.

Junis’ day ended prematurely with another injury scare, though.

On his 85th and final pitch, Sam Hilliard lined a 108-mph comebacker that struck Junis in his left hand. Junis finished the play, throwing over to first to record the second out of the seventh inning but appeared to be in serious pain. Head trainer Dave Groeschner came to check on him and eventually walked off the field with Junis.

Kapler said after the game that the initial scans on Junis’ left hand came back negative, but the right-hander will get a CT scan on Monday. Kapler noted that the ball hit Junis in the palm, leaving a visible imprint of the seams of the baseball.